Methods: We manufactured various amlodipine ODTs composed of granules that were different in regard to physical masking effectiveness by ethyl cellulose coating. The volume of ethyl cellulose varied, with 4%, 6%, and 10% of the whole amlodipine ODT mass used to manufacture C4, C6, and C10 granules, respectively. Granules without ethyl cellulose were also prepared, and denoted as C0 granules.
We examined the amlodipine dissolution from these ODTs in vivo in the human oral cavity. Ten healthy volunteers participated as subjects after providing written informed consent. This study was conducted as a randomized crossover single-blinded trial which was approved by the Ethics Committee of Hamamatsu University School of Medicine, Japan.
Additionally, 5 different in vitro short dissolution test methods (Tricorptester, magnetic stirrer, rotating injection syringe, paddle apparatus, shaking) were used to evaluate dissolution and the results were compared to those obtained with the human volunteers to determine which of those methods best mimicked dissolution in the oral cavity. Mean prediction error (MPE), mean absolute error (MAE), and root mean squared error (RMSE) values were calculated using the residual of the dissolution ratio in the oral cavity (Dvivo) and that in the in vitro short dissolution test (Dvitro), with Dvivo was used as a reference, with the results expressed as a percentage (%MPE, %MAE, %RMSE, respectively).


Results: In the in vivo study, the amount of amlodipine dissolution in the oral cavity increased in accordance with time after taking the ODT. Additionally, increased levels of ethyl cellulose coating amount were shown to suppress dissolution. We also investigated a variety of in vitro short dissolution test methods. We found that all except for the paddle apparatus method resulted in a decreased dissolution ratio in association with an increase in coating amount, which agreed with the results obtained in the human subjects. Thus, we consider that these in vitro methods, except for the paddle apparatus, are suitable for short dissolution testing for confirming effectiveness.
The dissolution ratio of amlodipine in the human oral cavity and different in vitro short dissolution tests are shown in Fig. 1. In that figure, a line with a slope of 1 was drawn from the original position 0 to clearly show the different dissolution ratios between the values being compared in each graph. We found that the amount of dissolution after 30 seconds tended to be no evident difference between the in vivo and in vitro. For more detailed evaluations, %MPE, %MAE, and %RMSE values were calculated (Table 1). Those obtained with the Tricorptester method were lowest and this method was considered to more precisely mimic dissolution in the oral cavity of all the testing methods examined in this study. 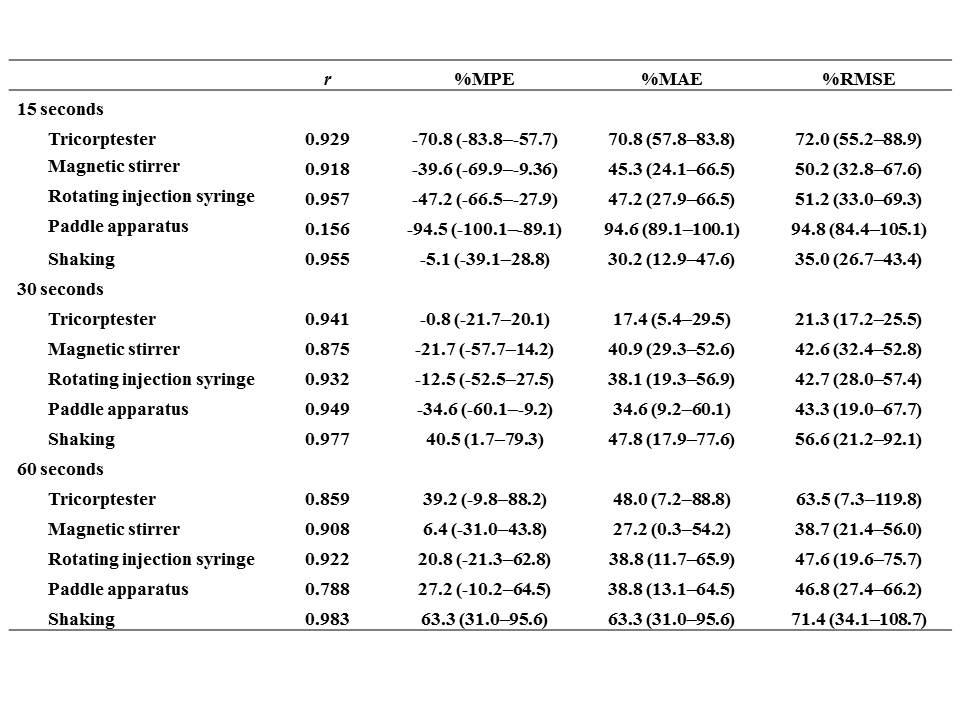