T1230-01-03 - Protection of Proteins from Proteolysis by Lipophilic Complexation

Purpose: The protein and peptide drugs used for chronic diseases usually require frequent injection which is painful, inconvenient and less compliant. Oral administration is the most attractive and sought after route. But enzymatic degradation is one of the major barriers for the oral delivery of protein and peptide drugs. So protection of these drugs from the enzymatic degradation is necessary in order to make the oral delivery feasible for these drugs. Lipophilic complexes of protein drugs can prevent its enzymatic degradation and also facilitate the incorporation of the protein drugs into different delivery systems, enhance the permeation and transport across biological membranes and the bioavailability of the protein drugs. The aim of this study is to evaluate the protective effect of different hydrophobic complexes of a model drug salmon calcitonin (sCT) against the degradation by serine proteases such as trypsin and α-chymotrypsin.


Methods: The hydrophobic complexes were prepared by two different methods: 1) hydrophobic ion pairing (HIP) with anionic surfactants: sodium deoxycholate (SDC), sodium oleate (SO), sodium docusate (SDOC) and sodium tripolyphosphate (STPP), and 2) solid dispersion with amphipiles by co-solubilization and lyophilization of sCT with soybean phosphatidyl choline (SPC). The efficiency of these methods was evaluated, and the partition coefficient (log P) of these complexes was studied in an octanol-water system. For the enzymatic degradation study, sCT or the hydrophobic complexes were added in Tris buffer (100mM, pH 8) incubated at 37oC for 10 min, and then mixed with trypsin or α-chymotrypsin. The concentration of sCT, trypsin and α-chymotrypsin in the initial reaction mixture was 2 mg/mL, 0.5 mM and 0.1 µM, respectively. The mixture was incubated at 37oC. sCT was dissolved while the complexes were suspended in the reaction mixture. At the pre-determined time points, 100 µL was taken from the mixture and added with 50 µL of 2% trifluoro-acetic acid to stop the reaction. The samples were assayed for sCT by HPLC.


Results: By HIP, the complexation efficiency was in the range of 41-85.44%. Through solid dispersion method, Soy PC showed 98.13±1.80% complexation efficiency. All the complexes increased the log P as compared to sCT. Soy PC complex achieved the highest log P of 0.95±0.082 and sodium oleate complex showed the lowest log P of -0.13±0.36 among the various complex formations, as compared to sCT with a log P of -1.94±0.34. Free sCT was completely degraded within one hour by the enzymes, while all the hydrophobic complexes had about 51-63 % degradation after three hours. The less degradation of sCT in the complexes was observed because of their low solubilities in the reaction mixture and also because of shielding and steric hindrance of these complexing agents. The sCT-SDOC complex showed maximum protection of sCT against both enzymes. After three hours of trypsin incubation sCT-SDOC showed about 54% while sCT-SDC, sCT-SO, sCT-STPP and sCT-SPC showed 50%, 37%, 39% and 46% residual sCT, respectively. Also after three hours of α-chymotrypsin incubation sCT-SDOC, sCT-SDC, sCT-SO, sCT-STPP and sCT-SPC complexes showed 54%, 33%, 50%, 33% and 41% residual sCT, respectively. This shows that the protective effect of the complexing agent may be dependent upon its structure and bonding to sCT.


Conclusion: The hydrophobic complexes of protein and peptides can enhance its stability against enzymatic degradation. 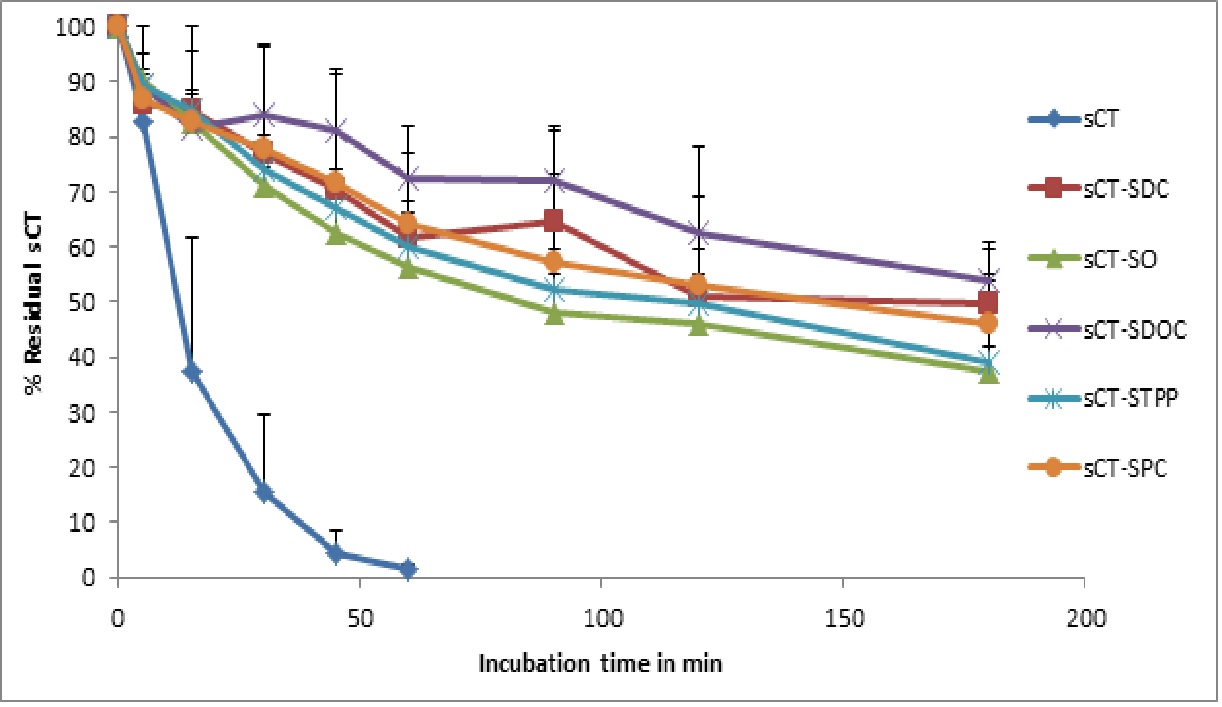 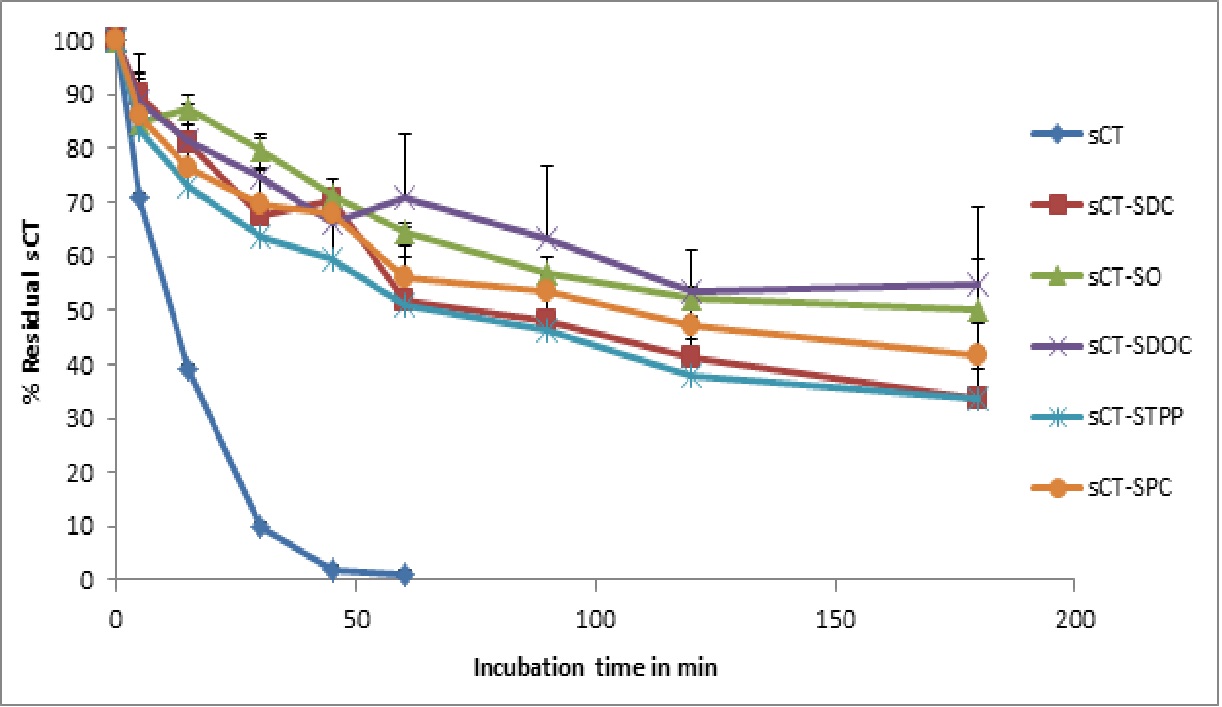