Purpose: Taste is one of the most important parameters governing patient compliance. Undesirable taste is one of several important formulation problems that are encountered with certain drug. In this study, guaifenesin (GFN) particles were prepared by two separate coating, each of which formed the drug layer, the coating layer. Fluidized bed was used to coat the two layers. Hypromellose phthalate was evaluated for the taste-masking effect on a model bitter-tasting drug, GFN. The influence of hypromellose phthalate loading (5 - 25% w/w) and GFN particles release profiles was evaluated.


Results: Coating of the particles with hypromellose phthalate provided taste protection by delaying dissolution and extending the time for clearing the particles from the mouth. Hypromellose phthalate, a polymer which is insoluble below pH5.5 or in the absence of cations appeared to offer the best potential in terms of both taste protection and bioavailability. Diacetyl monoglyceride was included in the coating solution as a plasticizer. To determine the optimum amount of polymer to apply, a series of coated guaifenesin particles was prepared by application of 5 – 25% hypromellose phthalate. Release rates of guaifenesin from the coated particles using pH 1.2 and pH 6.8 buffers. Drug release was significantly decreased according to coating weight increased at pH 1.2 buffer. No release of guaifenesin was observed at all time ranges with coatings above 25% at pH 1.2.

Without this acid-insoluble coating encapsulating the particles, a substantial percentage of guaifenesin would be released. At pH 6.8 the release was much faster but still dependent on the coating level. Over 90% of guaifenesin was release within 30 mins at pH 6.8 buffer.

SEM images showed that the particles had a satisfactory surface morphology and also two layers, drug layer and hypromellose phthalate layer were well-formed.


Conclusion: Particle coating by using hypromellose phthalate was effective for taste-masking on model bitter-drug, guaifenesin. Also, we evaluated the drug release dependent on coating weight. Release rate was minimized at the most coating weight of 25%. 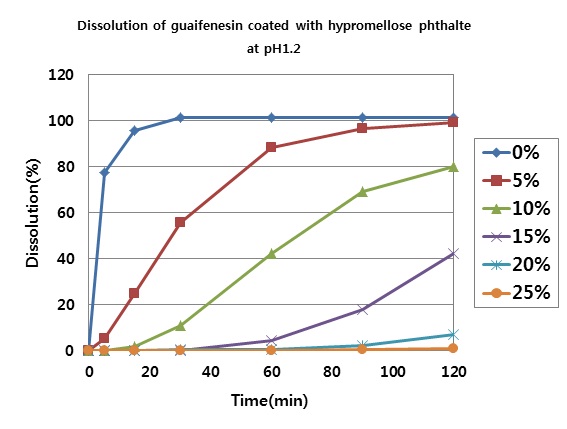 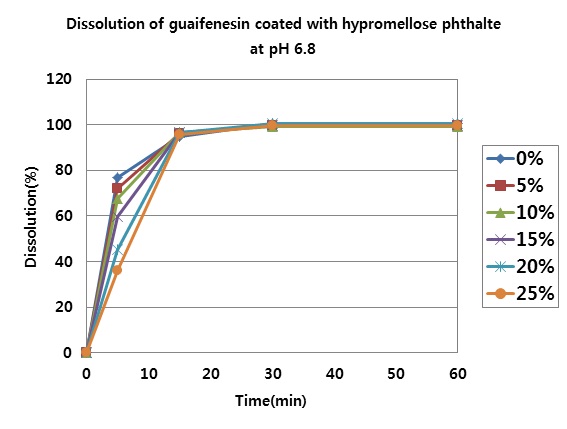 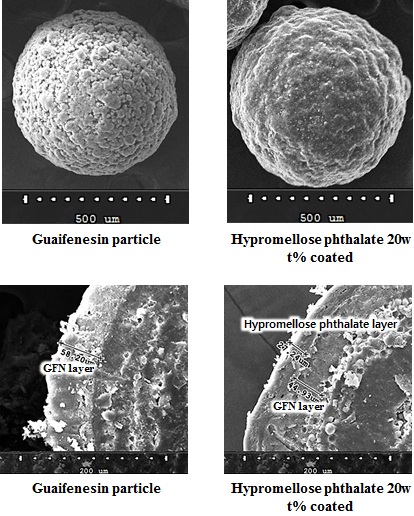