Purpose: Venous thromboembolism (VTE) remains a major public health crisis. VTE is the third most common cardiovascular disease and annually affects about 1 million people in the US. VTE is responsible for more than 100,000 annual deaths in the US. Nevertheless, clinically used anticoagulants are plagued with a number of drawbacks including the life-threatening risk of internal bleeding. New approaches to safely prevent and/or treat VTE are highly clinically significant. Factor XIIIa (FXIIIa) is a transglutaminase procoagulant that is different from all other physiologic procoagulants which are serine proteases. This unique biochemical aspect of FXIIIa has been under investigation in the context of VTE mechanism. Venous thrombi from FXIII-deficient mice were found to be significantly smaller in size. Various studies also suggested that specific FXIIIa polymorphism provides a moderate protection against VTE and that heterozygous FXIII-deficient mice do not show signs of excessive bleeding. Therefore, FXIIIa may serve as a potential therapeutic target to develop a new effective treatment for VTE that does not significantly increase the bleeding risk. Thus, this project aims at targeting human FXIIIa to develop new anticoagulants to treat thromboembolic diseases without causing the life-threatening internal bleeding that complicates the use of current anticoagulants.


Methods: To identify potential FXIIIa inhibitors, a library of 20 arylsulfonates was screened for inhibition of human FXIIIa in a bi-substrate, fluorescence-based transglutamination assay under physiological conditions. The selectivity of arylsulfonates against thrombin and factor Xa, two serine proteases in the coagulation cascade, was also evaluated using the corresponding chromogenic substrate hydrolysis assay. The activated partial thromboplastin time and prothrombin time assays in human plasma were used to evaluate the molecules’ functional selectivity. Molecular modeling was exploited to determine the putative binding site of arylsulfonates on human FXIIIa.


Results: Five arylsulfonates inhibited FXIIIa approximately >30% in the transglutamination assay at a concentration of 50 µM. These arylsulfonates were further investigated and showed dose-dependent inhibition with IC50 values of ~6–286 µM and efficacy of 84-100%. The molecules also showed variable levels of selectivity against thrombin and factor Xa. Arylsulfonates doubled the clotting times of human plasma only at concentrations higher than 250 µM suggesting a significant level of target specificity. Molecular modeling studies indicated that inhibition of FXIIIa may stem from the binding of arylsulfonates to an allosteric cationic site which involves Arg244, Arg252, Lys257, Arg260 and Lys269.


Conclusion: Overall, we identified five arylsulfonates that moderately inhibit FXIIIa. The reported inhibitors may serve as a novel platform to guide subsequent efforts to rationally design allosteric FXIIIa inhibitors as new anticoagulants that are not associated with major bleeding risk. 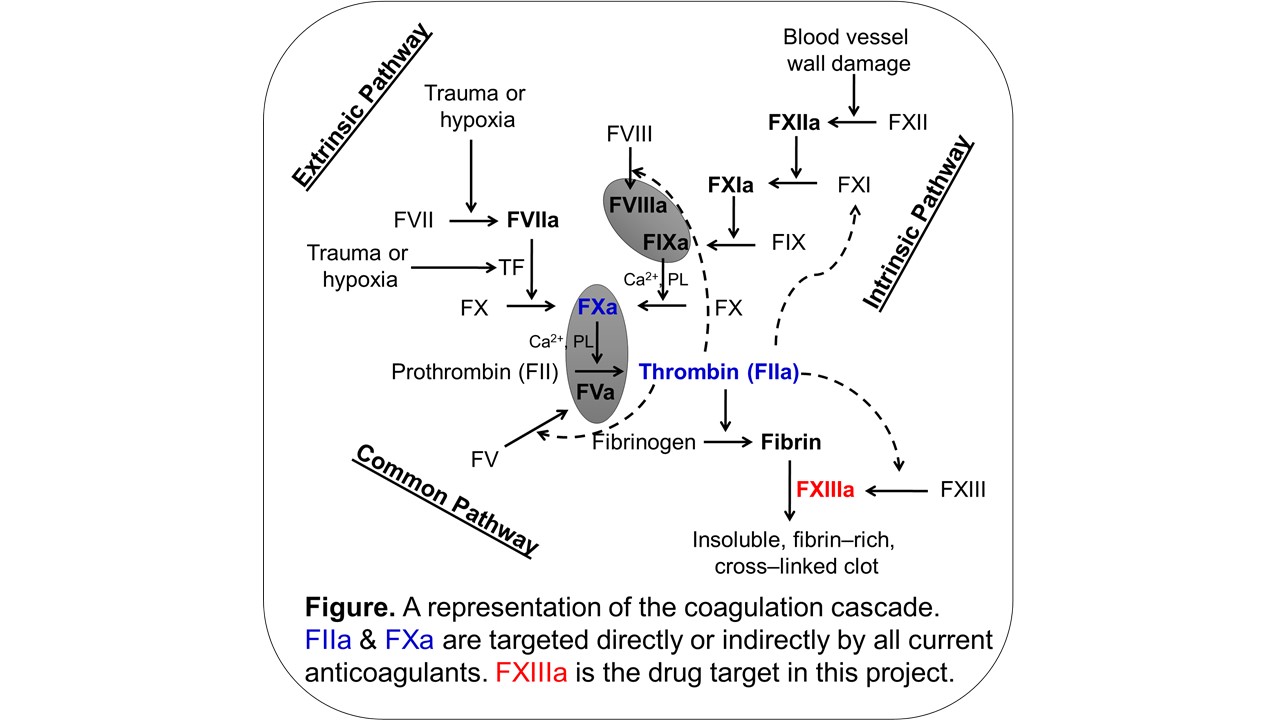