Purpose: The objective of this work was to develop a dosage form to treat the patients suffering from early morning angina attacks via hot melt extrusion technology. Particularly this work was aimed to improve the solubility of Nifedipine (NFD) and control the drug release to make the dose available between 6-8h after oral administration.


Methods: The chrono modulated multiple unit particle systems was developed in two stages. In the first stage, amorphous solid dispersions (ASD) of poorly soluble NFD were developed using HPMCAS LG. The processing conditions were optimized based on the melting point of the drug and glass transition temperature (Tg) of the polymer. Hot melt extrusion was performed using an 11mm twin screw extruder (Process 11 Thermo Fisher Scientific) employing a Thermo Fisher standard screw configuration. The prepared ASD was analyzed by differential scanning calorimetry (TA Instruments DSC 25) and X-ray powder diffraction (XRD) to check the amorphous conversion of NFD. In the second stage, the ASD was milled and further processed with Eudragit® FS 100 into multiple unit particle systems (MUPS) to control the drug release. The in vitro release studies were conducted by USP type II apparatus (SR8-plusTM, Hanson) in the media with an initial 0.1N HCl (pH of 1.2) followed by pH of 6.8 and 7.4 phosphate buffer at regular sampling intervals up to 8h. The ASD was tested at accelerated conditions (40⁰C/75% RH) for 3 months and analyzed for crystallinity, content uniformity and drug release.


Results: Preliminary studies were performed at various drug loads and a maximum of 40% drug load was possible for a feasible extrusion process. In the step scan of the DSC studies the ASD showed a single Tg showing the complete amorphous conversion of the product which was further confirmed by XRD studies. The second stage studies were performed at 30-40°C above the Tg of Eudragit® FS 100 to facilitate the encapsulation of ASD prepared in the first stage. The in vitro drug release of ASD showed a complete drug release within 1h of study in pH 6.8phosphate buffer confirming the improvement in the solubility of NFD. The MUPS (final product) showed a drug release of around 10% in the first 6h, with the rest of the drug completely releasing in next 2h. This shows the ability of the MUPS to control the drug release up to 6h and aid in complete release in next 2h, which makes it a viable option to release the drug in the early morning hours if the patient consumes the dosage form before going to bed. The ASDs were stable at accelerated conditions for 3 months without any crystallization. The results confirm the ability of the developed MUPS as a good platform to treat early morning angina attacks in cardiac patients.


Conclusion: Amorphous solid dispersions of NFD were successfully prepared and successfully formulated into MUPS. The prepared MUPS showed a complete drug release with an initial lag of about 6h providing a platform to treat angina patients suffering from early morning attacks. 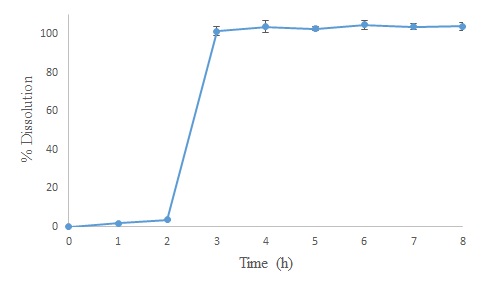 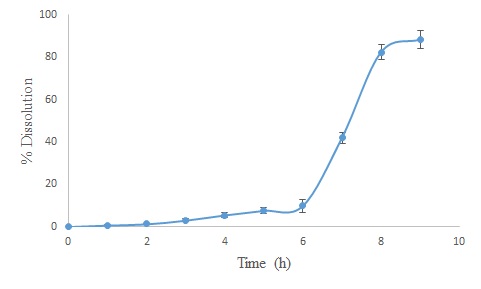