Purpose: Oral combination products delivering more than one active pharmaceutical ingredient have the potential to reduce pill burden, increase patient compliance, and in some cases improve efficacy. Spray dried dispersions (SDD) are an increasingly common approach to formulating low solubility, BCS Class II, APIs; SDD powders can be integrated into solid dosage forms such as tablets or capsules. Combination products leveraging SDD formulation approaches can therefore either be co-formulated in the SDD drug product intermediate or co-delivered in the solid dosage form either as two independent SDD formulations (if both molecules are poor solubility), or as an SDD and a crystalline API. Formulation considerations for each approach include physical and chemical stability, performance (solubility, dissolution, and absorption), as well as the ease and cost of manufacture.


Results: In this work we have compared co-formulation and co-delivery of spray dried dispersions of resveratrol and 6,7-dihydroxy bergamottin. Resveratrol (Tm = 261 °C; 30 ug/mL aqueous solubility) and 6,7-dihydroxy bergamottin (105 °C; ~ 40 ug/mL solubility) both have low solubility benefit from an enabling formulation. SDDs were made using a single spray solution containing HPMCAS-M, PVP-VA, and Eudragit L100 at 25 and 50 wt% drug:polymer. SDDs showed a single Tg and no evidence of phase separation. The dissolution rate of resveratrol and bergamottin is comparable in both independent SDD formulations and the co-amorphous formulation. A single co-amorphous formulation approach decreases manufacturing time to produce the spray dried dispersion by half and reduces the number of subsequent processing steps to produce a co-formulated solid dosage form. A detailed description of the comparison between independent SDD formulations and a single co-amorphous formulation containing both molecules in regard to physical stability, performance, and manufacturability is presented.


Conclusion: While a single co-amorphous formulation is more prone to physical instability, the approach provides a significant decrease in production time and simplifies the subsequent solid dosage form manufacturing process. 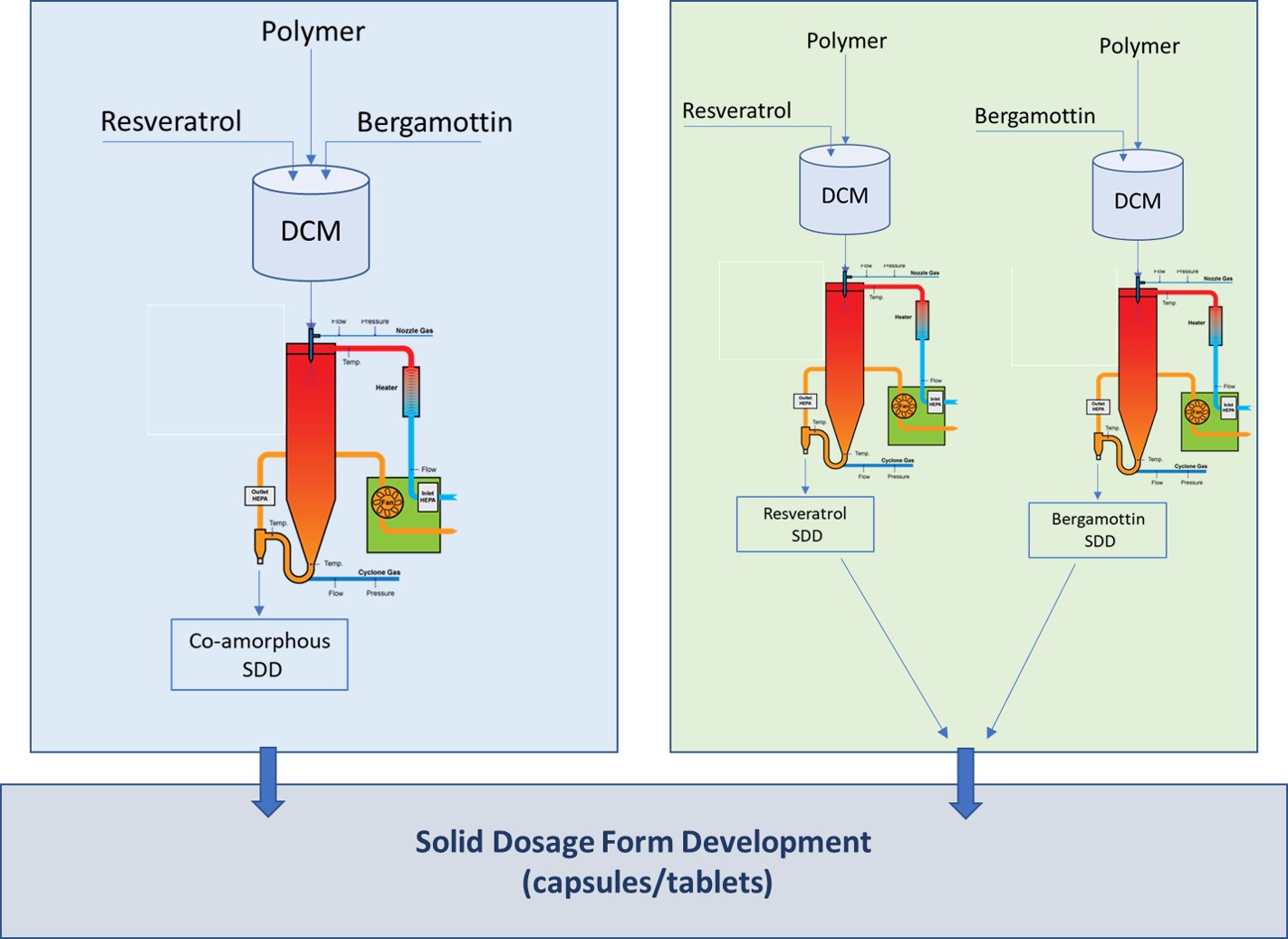