W1130-09-58 - Compartmental Pharmacokinetic Modeling Describing the Sustained Exposures of CZ48 and Its Active Moiety, Camptothecin, from Nanosuspensions in Rat Plasma and Bile

Purpose: CZ48 is a lactone-stabilized camptothecin (CPT), which is a topoisomerase 1 inhibitor. The antitumor activities of CZ48 have been demonstrated against various human tumors such as breast, bladder, colon, and lung in preclinical models. The first phase 1 clinical trial has been terminated in patients with solid tumors or lymphoma, and the second phase 1 clinical trial is ongoing to determine the dose limiting toxicities after the oral administration of CZ48 daily for 4 weeks. Our lab has developed nanosuspension (NS) formulation in order to enhance the solubility of CZ48, which can be applied to various dosing routes including oral and intravenous (IV). The NS formulation has shown sustained release of CZ48 and been extensively evaluated for pharmacokinetics (PK) of CZ48 and CPT after oral or IV administration of CZ48 in rats. In particular, the PK data showed sustained concentrations of CZ48 and CPT in plasma and bile after a single oral dose of CZ48, which may implicate enterohepatic recycling of CZ48 and CPT. In this study, the compartmental PK modeling was utilized in order to describe the sustained concentrations of CZ48 and CPT in plasma and bile, and to evaluate the impact of NS on the PK parameters relevant to their sustained characteristics and potential enterohepatic recycling.


Methods: A PK model was constructed by employing Pharsight Phoenix Non-Linear Mixed Effects (NLME)TM 1.3 software. PK parameters were predicted by multiplicate error model and First Order Conditional Estimation Extended Least Squares (FOCE ELS). Based on the Akaike Information criteria (AIC) value and the quality of observed versus fitted data plots, the model structure was optimized. Plasma and bile samples were collected from Sprague Dawley (SD) male rats for 12 h after a single oral dose of CZ48 in co-solvent solution (CoS, control group) or NS formulation (treatment group) at 25 mg/kg. The concentrations of CZ48 and CPT in plasma and bile were quantified by our published LC-MS/MS assay and utilized in the establishment of the PK model. The Student’s t-test was performed to evaluate the impact of NS on the plasma and bile PKs of CZ48 and CPT by comparing model parameters between the CoS and NS groups.


Results: The optimized model was consisted of compartments for CZ48 and CPT in plasma, CPT in bile and the enterohepatic recycling of CPT connected with different rate constants (Figure 1). The rate constant responsible for the conversion of CZ48 to CPT (Kc) was significantly lower in the NS group compared to that in the CoS group (Table 1), which indicated the sustained release of CZ48 from NS and the extended exposure of CZ48 in blood as a lactone-stabilized form. The rate constant depicting the clearance of CPT (Ke,CPT) was significantly lower in the NS group. It might indicate that CPT stays in the blood circulation in more sustained time than that from CoS due to the sustained release of CZ48 from NS. Estimates representing the nonlinear biliary excretion rate of CPT (Vmax and Km), and rate constants responsible for the enterohepatic recycling (K24, K34, K42, and K43) were comparable between the groups. It is consistent with our in vivo results, as AUC of CPT in bile was comparable between the groups for 12 h.


Conclusion: A compartmental PK model was well-constructed to estimate PK parameters responsible for the sustained concentrations of CZ48 and CPT in plasma and bile. Based on the estimates, NS significantly impacted the concentration of CPT in plasma and the conversion rate from CZ48 to CPT. However, there was no significant effect on the biliary excretion and potential enterohepatic recycling of CPT. 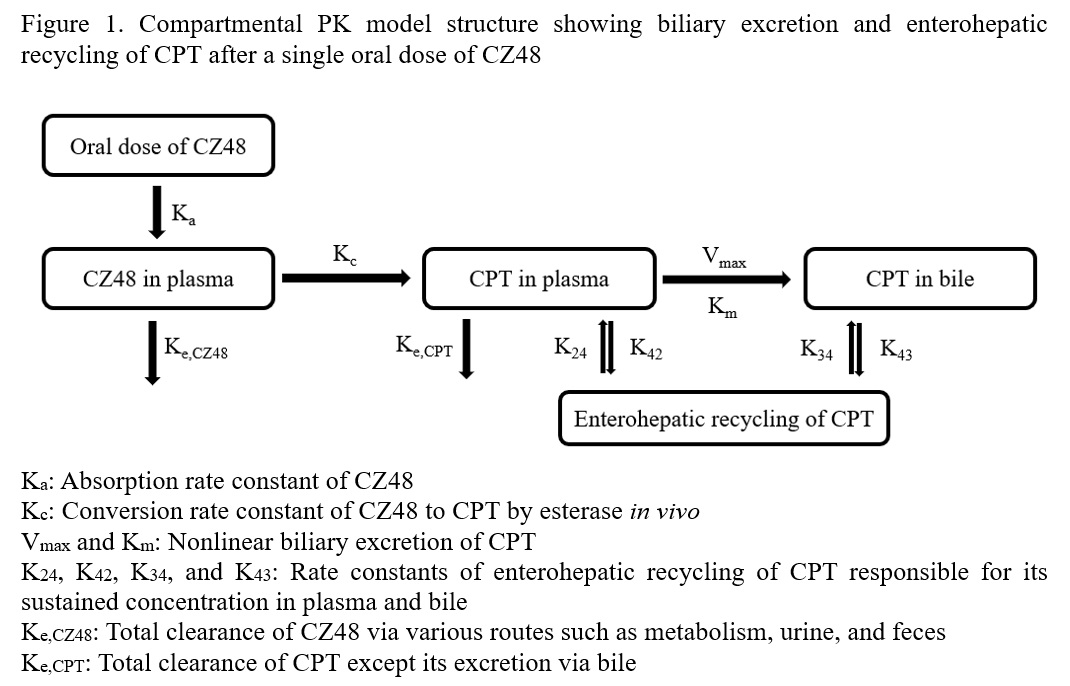