Purpose: With continuous manufacturing gaining ever so importance in the pharmaceutical industry, consistency of excipients is vital. Hence the performance of excipients (CMA’s) in different process units such as powder feeders, blenders, continuous granulators etc., needs to be understood. Raw material feeding is usually one of the first unit operation and variations in this step could affect finished product quality. This variation can be caused due to the inconsistency in the material attributes or process inaccuracy.

Loss-in-weight (LIW) gravimetric feeders with a control system (twin screw with varying rpm) are generally used to counter this variation. However, intrinsic material attributes such as particle size distribution (PSD), flow, density, wall friction etc., could impact the accuracy of powder feeding. Hence to study and understand these correlations, standard Pharmatose® 200M (DFE Pharma, Netherlands) along with custom made fine and coarse grade of Pharmatose® 200M were analyzed.


Methods: Pharmatose® 200M and the custom made fine and coarse grades of Pharmatose® 200M were supplied by DFE Pharma. Powder feeding systems was manufactured by Gericke AG (Switzerland).
The feeder was operated in two modes volumetric (no control system, fixed twin screw speed) and gravimetric (using control system, variable twin screw system). Two feed rates of 9.5 kg/h and 14 kg/h were studied.
The discharged excipients were collected in a bin placed on a Mettler Toledo weight scale. Weight measurements were taken every 1 s and the data was analyzed by a software developed by Gericke using LabView.

However in the gravimetric mode at feed rate of 14 kg/h, the variations between the three grades of Pharmatose® 200M was reduced due to the control system of the feeder. This is because the feeder compensated for the variations in the material attributes by adjusting the twin screw rpm and delivered a constant feed rate for all the three grades as can be seen in Figure 2. The relative standard deviation and relative error for all the three grades were low (Table 1b). Pharmatose® 200M showed low variation but the differences were small. Similar results were obtained at 9.5 kg/h (results not shown).


Conclusion: The need for consistent excipients with a tight PSD, density, flow etc., is vital to obtain accurate feeding rate in a Volumetric feeder (mode). Volumetric mode depicts variation in feeding due to the fixed control system (fixed twin screw rpm) and therefore represents material attributes such as PSD, BD etc. Using gravimetric loss-in-weight feeder system constant feeding can be achieved. However, during refiling, the system switches to volumetric mode and thus material consistency becomes an important factor also in gravimetric feeding. Therefore it is important to have consistent excipients and gravimetric feeding for processing in continuous manufacturing. 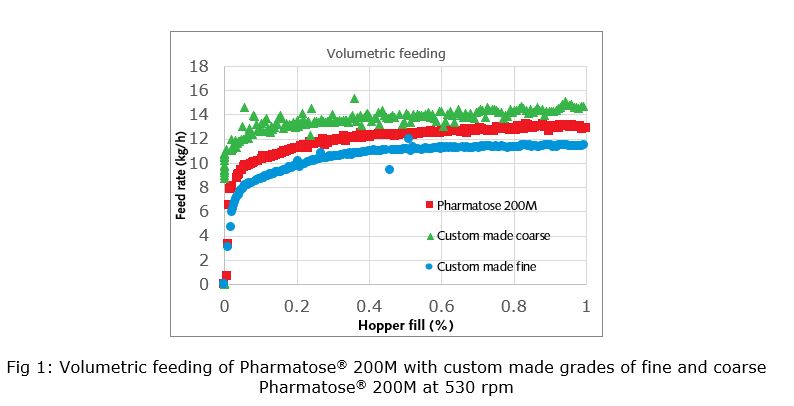