Purpose: Supersaturating drug delivery systems are attractive formulation strategies for poorly soluble drug compounds as they can generate high luminal drug concentration and enhance oral bioavailability. Moreover, highly supersaturated solutions have a tendency to undergo liquid-liquid phase separation (LLPS) if the compound amorphous solubility is exceeded. The drug-rich phase has shown potential to act as a drug reservoir and replenish the drug lost due to absorption across the membrane, thus maintaining maximum thermodynamic activity for extended period of time. The original studies demonstrating the reservoir effect of drug-rich nanodroplets was performed using diffusive flux measurements across cellulose-based membranes, where the biorelevance of this membrane is often debated. Parallel artificial permeability assay (PAMPA) is one of the crucial in vitro tools used for physicochemical profiling in the pharmaceutical industry as it is known to provide biorelevant information. In addition, an increasing shift from dissolution testing to dissolution-permeation testing of formulations has piqued interest in the application of the PAMPA membrane as the permeation barrier in two-compartment analysis. However, there is a lack of fundamental understanding of how the inherent complexities of both the membranes and the systems under evaluation impact the mass flow rates, and in turn, the validity of conclusions made from these studies. In this study, we investigated the contribution of drug-rich nanodroplets in LLPS systems on diffusive flux across PAMPA membranes. In addition, we explored the impact of PAMPA variants such as lipid composition, hydrophobicity and pore size of the filter support, and receiver sink on mass flow rates of solutions containing amorphous nanodroplets across the membrane.


Methods: A side-by-side diffusion cell, separated by a PAMPA membrane was used to carry out flux measurements. Flux was evaluated for different model compounds at concentrations below and above their amorphous solubility. A desired concentration was generated by addition of methanolic stock solution of the compound. The receiver concentration was measured using UV-dip probe. Receiver sink was introduced in the system by addition of 2% sodium dodecyl sulfate (SDS). The particle size and zeta potential of drug-rich nanodroplets was measured by Nano-zetasizer. Transport of lucifer yellow (LY) and D2O was measured to determine integrity of PAMPA membrane. Concentration of D2O was measured by FT-IR.


Results: The mass flow rates plateaued to the maximum value for donor concentrations above the amorphous solubility, indicating the maximum thermodynamic activity attained in the solution (Figure a). There was no additional contribution of drug-rich nanodroplets to the mass flow. The observations were similar to that reported when using cellulose membranes. Filter properties and lipid/ no lipid impregnation did not show a significant influence on the mass flow rates for lipophilic molecules, while a significant impact was observed for hydrophilic molecules. Further studies revealed that this was because the overall permeability of lipophilic compounds was unstirred water layer (UWL)-limited whereas hydrophilic compounds were limited by membrane permeability. Intriguingly, receiver sink with addition of SDS altered the membrane integrity for lipids impregnated on hydrophilic membrane, whereas gradual increase in mass flow rates of lipophilic compound was observed across lipid impregnated on hydrophobic membrane for concentrations above the amorphous solubility, i.e., with the increasing presence of nanodroplets in the solution (Figure b). A set of experiments meticulously designed to gain insight into the anomalous findings revealed interesting results: (1) The sink effect enhanced both the intrinsic membrane permeability and UWL permeability for lipophilic molecules, (2) No influence of nanodroplet size variations on mass flow rates confirmed negligible contribution from shuttling of nanodroplets in UWL. Instead, the drug-rich hydrophobic nanodroplets showed a strong tendency to interact with the lipids and dissolve into them, generating a large concentration in the membrane that accelerated mass transfer in the presence of sink; and (3) Estimation of water/D2O transport might serve as a better membrane integrity test than LY flux due to inherent rejection of LY across hydrophobic filters.


Conclusion: This work presents an exhaustive study of mass transport of highly supersaturated solutions of drug compounds, undergoing LLPS, across lipid membranes used in PAMPA. Comparable mass flow rates obtained with or without lipid impregnation for lipophilic compounds highlighted the interpretation of flux results based on drug properties. A set of systematic studies further elucidated that sink might induce inherent differences in the mass transport rates due to alterations in membrane-solution partitioning of the drug compound, influencing overall permeability. Furthermore, drug nanodroplets may enhance mass transfer due to dissolution in lipids if sufficient sink in present. Increase in the popularity of PAMPA assay with SDS sink in the receiver, thus, warrants careful interpretation of flux outcomes. 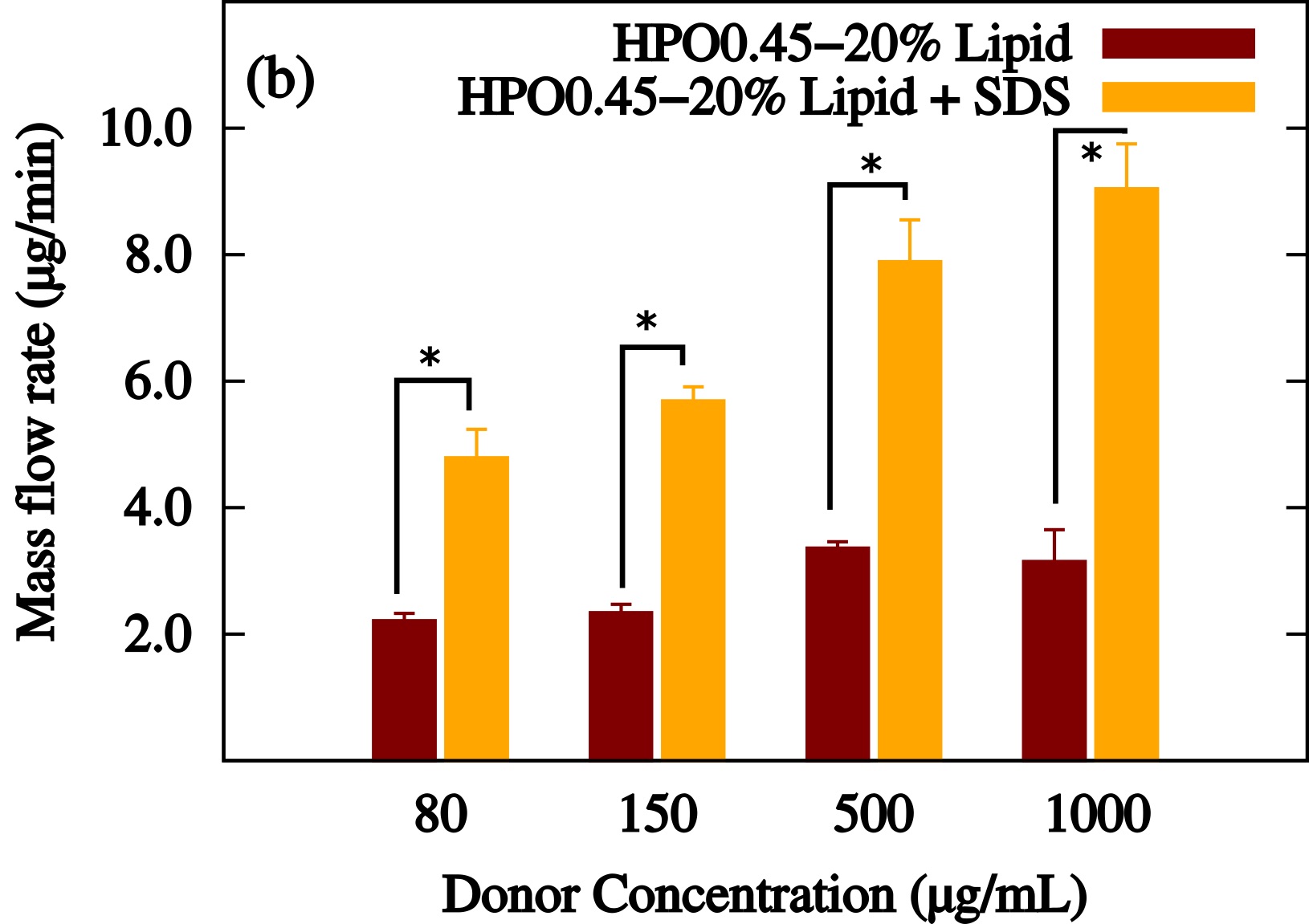