Purpose: In our previous research, ternary amorphous solid dispersions (ASDs) containing API, polymer, and mesoporous silica prepared by a thermal process (e.g. hot melt method or hot melt extrusion (HME)) produced dissolution properties which represent the “spring and parachute” effect. In the HME process, we found a direct correlation between increasing the number of kneading zones in a twin-screw extruder and increased miscibility between API and polymer. The increased miscibility resulted from an increase in built up networks (interactions) between API, hydroxypropyl methylcellulose (HPMC), and mesoporous silica and tended to inhibit API recrystallization. In this study, in order to evaluate the benefit of the ternary ASD, itraconazole (ITZ) was selected as a poorly water-soluble model drug. ITZ, HPMC, and mesoporous silica were extruded by HME, and we investigated the following aims: i) To generate an increased parachute effect with low polymer ratio for the formulation, which will be tested in neutral media (in which ITZ is poorly soluble), and each AffinisolTM grade (which are composed of different functional group ratios) was compared with HPMC 2910. ii) To design a tablet containing a high ratio of the ternary ASD and evaluate the dissolution behavior.


Results: The ternary ASDs were prepared by HME and the sieved extrudates evaluated by PXRD and mDSC. All extrudates were confirmed amorphous by characteristic halo patterns on PXRD and absence of endothermic events with mDSC. The dissolution behavior of ternary ASDs using a pH-transition condition was evaluated because ITZ has pH-dependent solubility. All ternary ASDs possessed similar dissolution profiles under acidic conditions. However, when the pH of dissolution media was changed from acidic to neutral at the t = 120 min, the dissolution profile of ITZ:AF15:XDP immediately decreased (Fig. 1). ITZ recrystallization was observed due to the extremely low solubility of ITZ under neutral conditions, and AF15 was unable to inhibit precipitation. In contrast, the dissolution profiles of ITZ:AF100:XDP and ITZ:AF4M:XDP showed a more efficient parachute effect after the pH transition. The parachute effect order was AF4M > AF100 > AF15, and this correlates with the order of decreasing polymer viscosities (molecular weights). Next, we designed 8 mm diameter tablets containing a high level of ternary ASD (80%), where 40% was comprised of ITZ. The ternary ASD tablet was compared with binary ASDs. The binary ASDs were formulated without AF4M or XDP and prepared by a thermal process, and then AF4M or XDP were added to mimic the ternary ASD ratio before tableting. We then observed the dissolution behavior of ternary and binary ASD tablets (same ratio of ITZ, AF4M and XDP in each tablet). In the pH-transition dissolution test, all tablets showed a similar dissolution profile. We hypothesize that ITZ and HPMC had enough time to dissolve in acidic media, and consequently, we observed a similar parachute effect of all samples in the neutral conditions. However, under pH 6.8 dissolution conditions, the ternary ASD tablets showed immediate ITZ release and demonstrated high ITZ concentrations compared with binary ASD tablets that contained AF4M or XDP as additives (Fig. 2). The ternary ASD tablets’ immediate release occurs because the ITZ/AF4M particles in XDP existed at a much smaller size compared to the particle size of ITZ/AF4M in the binary tablet composed of ITZ/AF4M with XDP as an additive. In contrast, ITZ dissolution from the binary tablet composed of ITZ/XDP with AF4M as an additive had no detectable dissolution. We hypothesize ITZ crystallization occurs in this scenario because ITZ and AF4M were not molecularly miscible after physical blending.


Conclusion: High viscosity grades of HPMC produced a high parachute effect for ternary ASD formulations containing ITZ in poorly soluble media. The tablet with a high ternary ASD ratio (80%, w/w) had sufficient hardness and disintegration in spite of containing a high viscosity polymer. The dissolution of the ternary ASD tablets were higher than binary ASDs that contained AF4M or XDP as additives (which were formed at the same ratio) in neutral media. Therefore, we demonstrated a ternary ASD containing a high viscosity polymer (AF4M) and mesoporous silica (XDP) was capable of producing a spring and parachute effect in poorly soluble media. 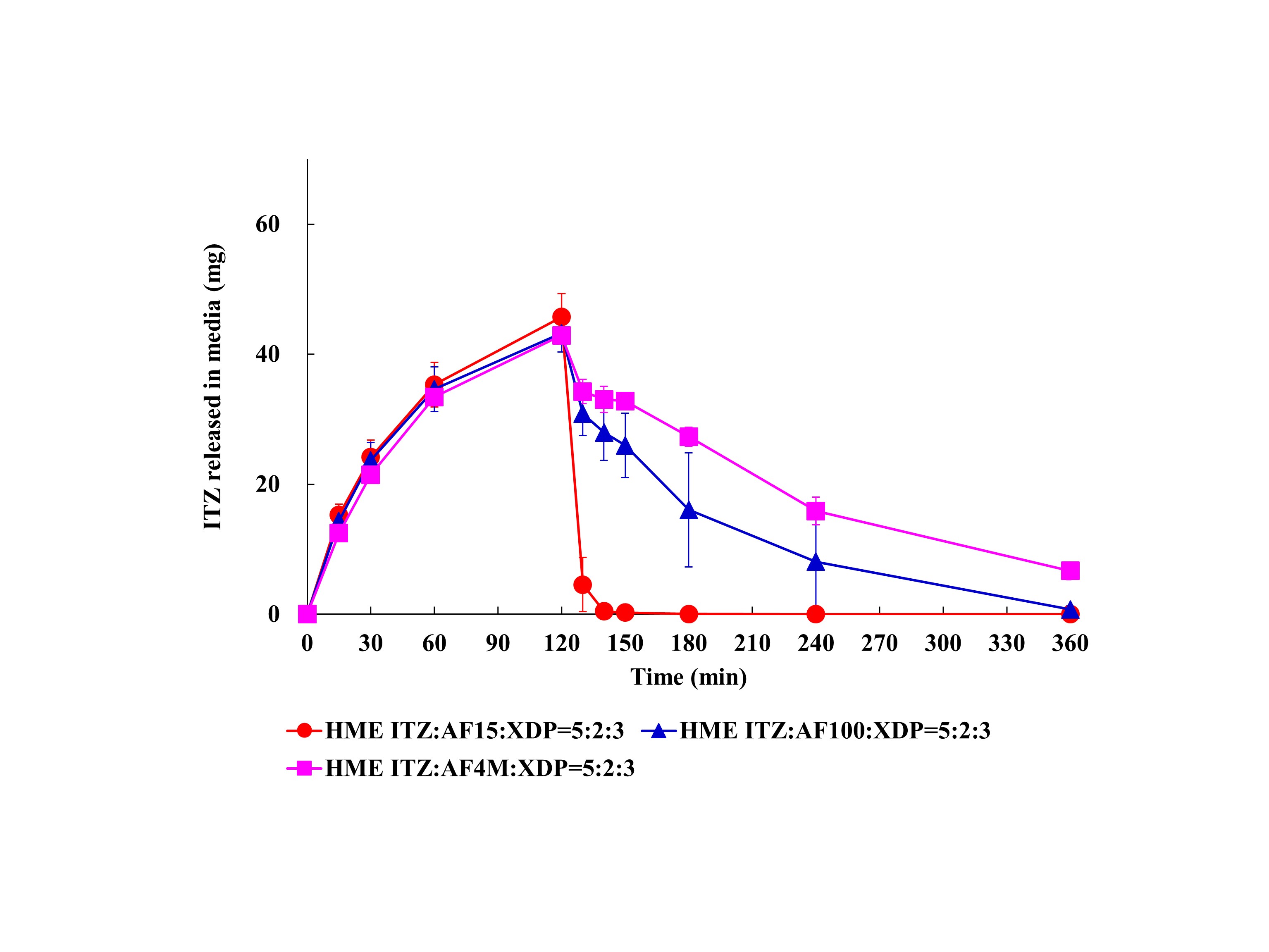 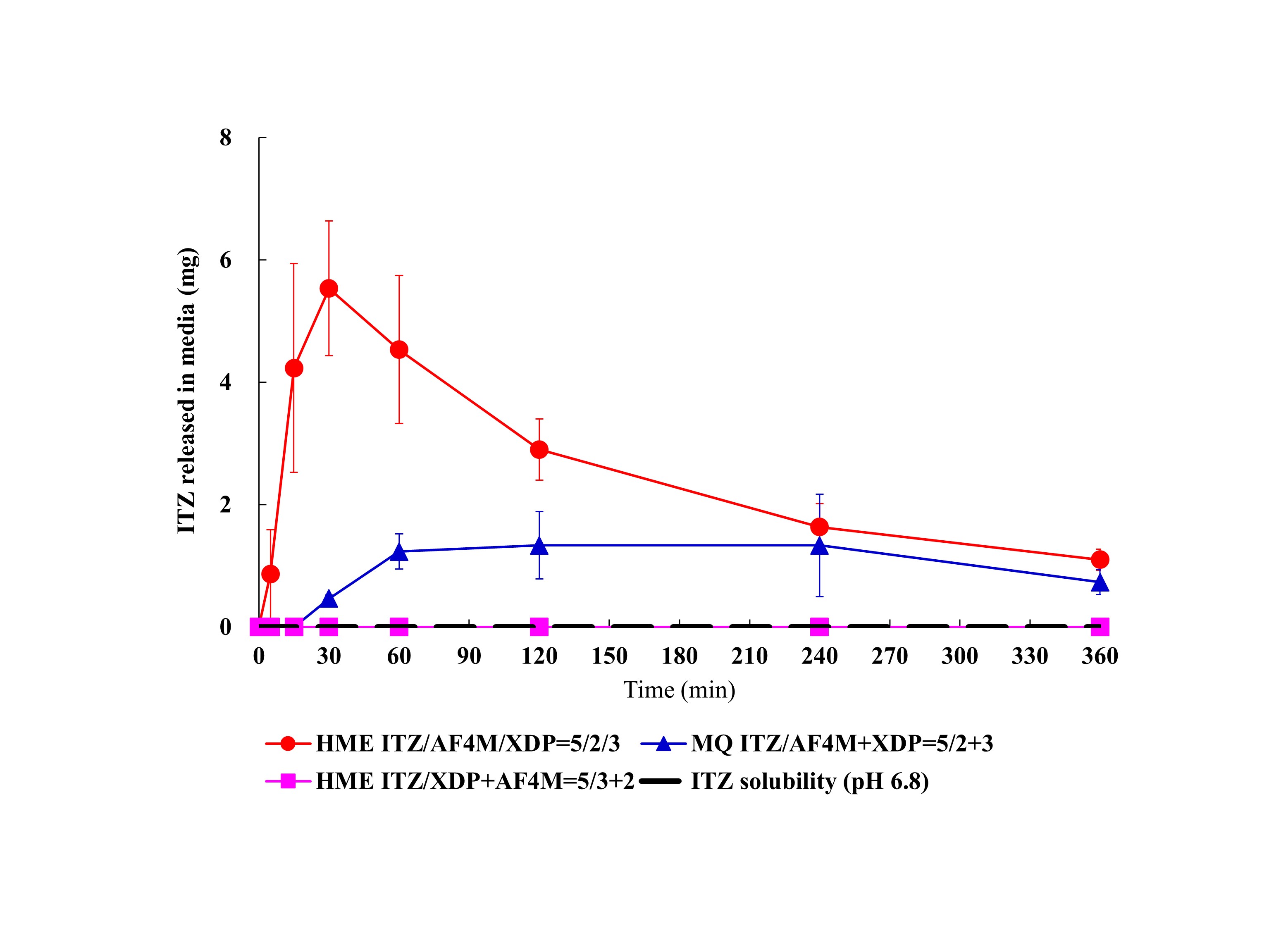