Purpose: Dry-eye is a common symptom associated with many diseases, a side-effect of several medications, and a condition related to many factors. Hence, patients presenting with dry-eye can make for a difficult diagnosis if the symptom is associated with the onset of disease. Thus, there is a need to develop novel modalities to detect changes in disease specific biomarker expression for screening and diagnostic applications. For this purpose, anionic hydrogel-coated gold nanoshells were used to detect two biomarkers, specifically lysozyme and lactoferrin (high isolectric point proteins), indicative of chronic dry-eye in pooled human tears.


Methods: Gold nanoshells (AuNS) were fabricated by seeded growth of colloidal gold on the surface of aminated silica nanoparticles. AuNS were then encapsulated in the amphiphilic graft copolymer, poly(maleic anhydride-alt-1-octadecene)-g-poly(ethylene glycol) methacrylate (PMAO-g-PEGMA) using solvent displacement techniques. A precipitation polymerization was then used to synthesize poly(N-isopropylacrylamide-co-methacrylic acid) (NIPAM-co-MAA) hydrogel shells on the surface. The resulting AuNS were dialyzed, washed, and stored in ultrapure water until further use.

Enzyme-linked immunosorbent assays (ELISAs) were used to determine the concentrations of lysozyme and lactoferrin in commercially available pooled human tears following the manufacturer’s instructions. Pooled human tears were then diluted in either 0.2X phosphate buffered saline (PBS, pH 7.4) or 0.2X histidine buffered saline (HBS, pH 5.5) to obtain a combined concentration of lysozyme and lactoferrin at 150 μg/mL (based on data obtained from ELISAs). Serial dilutions of the tear samples were further obtained in each buffer. In a 384 well plate, poly(NIPAM-co-MAA) coated AuNS were combined with each diluted tear sample (1:1) in either PBS or HBS. Using UV-Vis spectroscopy, the localized surface plasmon resonance (LSPR) spectra of the hydrogel-coated AuNS were measured after protein binding. Protein binding was performed with three independent batches of poly(NIPAM-co-MAA) AuNS and repeated in duplicates. All numerical data were reported as mean ± standard error of the mean and were analyzed statistically according to the Student’s t-test method. Values of p < 0.05 were considered significant.


Results: Concentration dependent changes in the maximum LSPR wavelength was observed when poly(NIPAM-co-MAA) AuNS were combined with increasing concentrations of total lysozyme and lactorferrin present in human tears diluted in either PBS or HBS. When poly(NIPAM-co-MAA) AuNS were combined with tear samples diluted in HBS, statistically significant (p < 0.05) increases in the maximum LSPR wavelength were observed compared to that in PBS at concentrations greater than 9 μg/mL (except for 18.8 μg/mL).


Conclusion: The ability to detect changes in the concentration of chronic dry-eye biomarkers using hydrogel-coated AuNS in diluted human tears is a critical result for the development of a translatable diagnostic sensor. Further development of this biosensing platform could have major impact in the screening and early diagnosis of many diseases associated with chronic dry-eye. 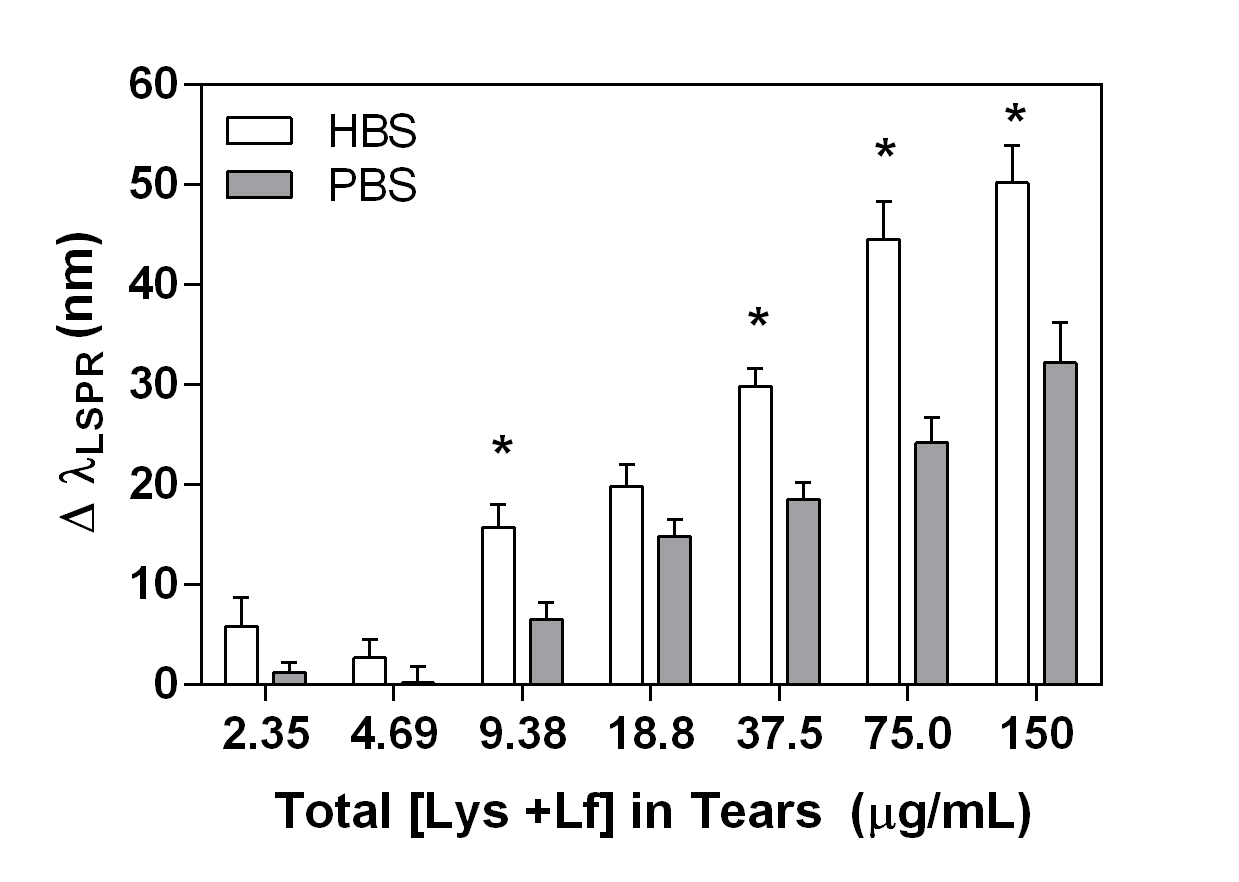