Purpose: A solubilized from of a poorly soluble compound was developed to improve thermodynamic solubility (Drug A). However, the resultant solubilized form (Drug A) remained dissolution rate limited, and also had a propensity to precipitate once in solution. This formulation development exercise was to evaluate the combined benefits of co-micronisation with functional excipients such as wetting agent or dispersion agent to improve drug dissolution rate, and use of precipitation inhibitors (PI) to maintain drug dissolution and improve bioavailability of Drug A.


Methods: Initial dissolution assessments of Drug A, and micronized Drug A were performed using USP apparatus II using non-sink dissolution FaSSIF media to allow discriminatory assessments of formulations. Micronised drug alone gave limited improvement in the drug dissolution due to poor wettability and dispersion, and therefore formulation development efforts were focussed on addressing these observations Co-micronisation of Drug A and functional excipients was explored. Formulation prototypes were prepared by jet-milling Drug A with one excipient, to achieve particle size of d50 < 10µm. To assess the impact of additional wetting agent or PI on the drug dissolution the co-micronised material was also blended with a candidate excipient at different ratios using a Turbula mixer before dissolution testing. The resultant formulation prototypes were assessed using single stage dissolution testing in biorelevant media. Additional 2-stage -biorelevant dissolution studies were performed using FaSSGF and FaSSIF media to further characterise preferred formulations.

By co-micronising Drug A with a functional excipient managed to improve the dissolution rate with a fast onset on drug release to achieve the supersaturation state. At the same time, precipitation of the solubilised metastable solution occurred rapidly after reaching supersaturation.

Based on the release profiles in Figure 1, Drug A co-micronised with precipitation inhibitor (83:17 Drug A: PI) was selected for further development, by blending with wetting agent.

The FaSSGF – FaSSIF 2-stage, in-vitro dissolution profiles in Figure 2 show a significant improvement of the selected formulation over the 83:17 Drug A:PI blend . The incorporation of wetting agent (via blending with the co-micronised blend) allowed rapid dispersion of the formulation, and the precipitation inhibitor (via co-micronising with Drug A) imposed a parachute effect on the metastable solution.


Conclusion: It is confirmed that co-micronisation of Drug A with a functional excipient could produce a spring effect in order to achieve a supersaturated state for Drug A. In the presence of a precipitation inhibitor, the solubilized drug was maintained in the metastable over a period of time with a slow precipitation rate. The addition of precipitation inhibitor has successfully maintained Drug A in the solubilized form for an extended period allowing greater potential for drug absorption. 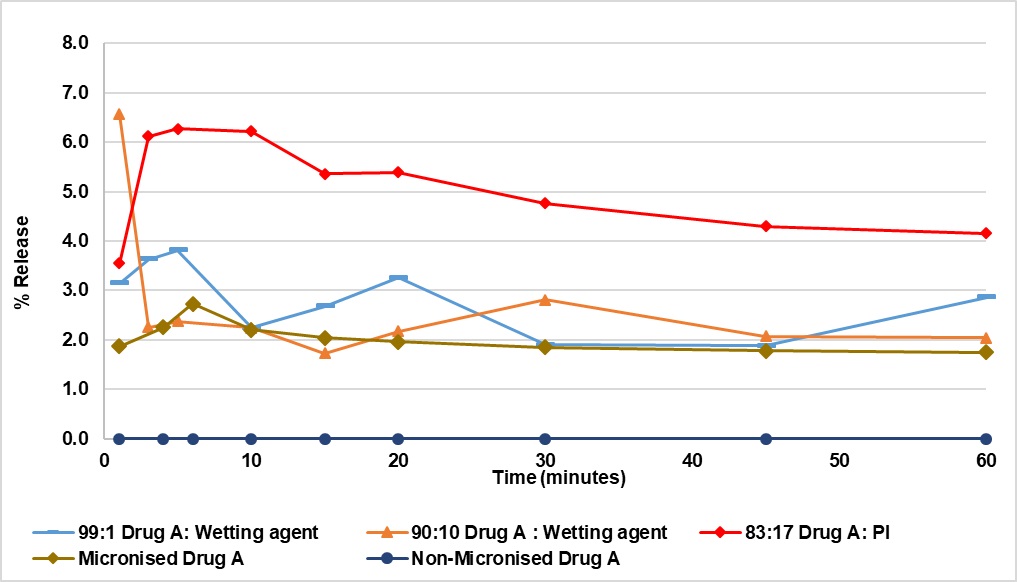 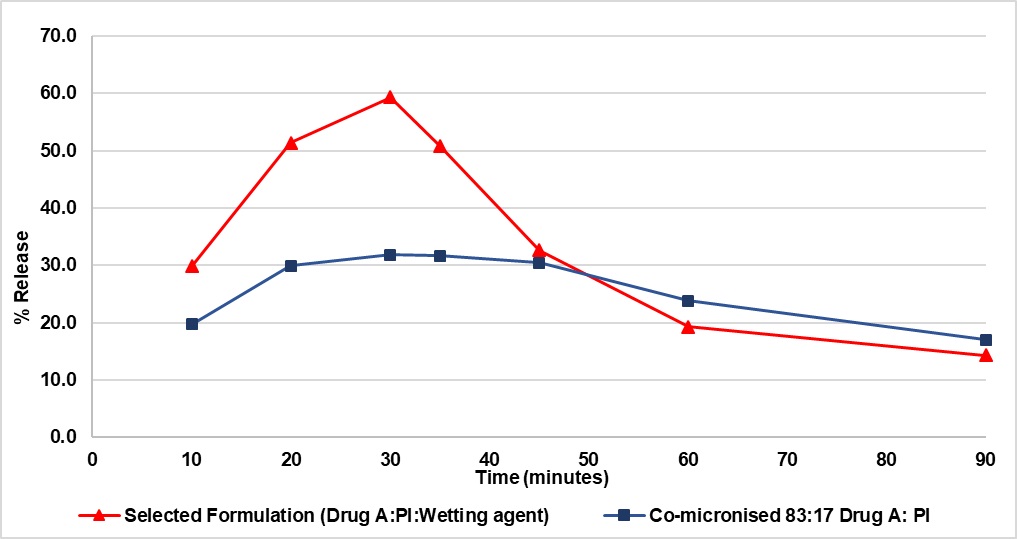