Purpose: Over 50% of melanoma has a BRAF mutation, and most melanoma metastasizes lymphatically (1,2). BRAF-mutant melanoma requires additional mutations for metastases, like changes in PTEN in the PI3K pathway (3). Standard therapy uses small BRAF inhibitors, such as dabrafenib (DAB), with MEK inhibitors, like trametinib (TRAM (4). Pictilisib (PIC) targets PI3K and is in clinical trials. Small molecules have limited lymphatic uptake and leaves melanoma in the lymphatics untreated (5). Nanoparticles have demonstrated increased efficacy against lymphatically metastasizing cancers (6). Therefore, the purpose of this work is to create drug-loaded nanoparticle formulations, assess in vitro efficacy, determine dose limiting toxicity (DLT) and maximum tolerated dose (MTD), and examine lymphatic uptake of orally administered small molecules as a basis for additional biodistribution studies. We hypothesize that DAB, TRAM, and PIC can be loaded into nanoparticles, drug-loaded nanoparticles will retain efficacy against melanoma in vitro, DLT and MTD can be established in mice, and low drug concentrations will be present in the lymphatics after oral DAB administration.


Methods: Polymeric nanoparticles were prepared with methoxy poly(ethylene glycol)5,000-block-poly(ε-caprolactone)10,000 and carboxy poly(ethylene glycol)5,000-block-poly(ε-caprolactone)10,000 in a 60:40 mg/mg ratio and loaded with DAB and TRAM in a 1:1 molar ratio (DT-NP), or DAB, TRAM, and PIC in a 1:1:1 molar ratio (DTP-NP). Cytotoxicity studies were completed in RPMI-7951 and SK-MEL-24 melanoma cell lines. DLT and MTD studies were determined in C57BL/6 mice with once weekly subcutaneous dosing. Biodistribution of orally administered DAB at 31 mg/kg was determined in Sprague Dawley rats at the Tmax (1 hr).


Results: DT-NP and DTP-NP are stable for at least 48 hours. Average sizes for DT-NP and DTP-NP after preparation are 24.05 nm and 24.95 nm, respectively, and sizes 48 hours after preparation are 24.31 nm and 25.21 nm, respectively. Polydispersity index indicates nanoparticles at each time point are monodisperse, with values ranging from 0.121 to 0.133. Surface ζ-potential for the nanoparticles averages between -10.9 mV and -19.6 mV. Drug combinations in DMSO are more efficacious than individual drugs, and combination index analysis (CI) indicates combinations are synergistic (Figure 1a and 1b). Nanoparticles maintained enhanced efficacy and synergy compared to individual drugs in DMSO (Figure 1c and 1d). For DT-NP and DTP-NP, the DLT in mice is 25 mg/kg with repeat dosing. At 12.5 mg/kg/week, there is no observable acute toxicity. Blood analysis shows no liver or kidney toxicity compared to control, demonstrated by no significant difference in aspartate aminotransferase (AST), alanine aminotransferase (ALT), or blood urea nitrogen (BUN) (Figure 2). At the Tmax of DAB in rats, the highest concentration of DAB was in the liver (average of 6,298 ng/mL), with little drug distribution lymphatically (average iliac and popliteal lymph node concentration of 316 ng/mL and 341 ng/mL, respectively) (Figure 3).


Conclusion: Nanoparticles can be loaded with drugs to target BRAF- and PTEN-mutant melanoma. These nanoparticles are efficacious and synergistic in vitro. Mice can be dosed with 12.5 mg/kg/dose of each nanoparticle formulation without toxicity (MTD). Biodistribution studies of orally administered DAB in rats shows limited lymphatic uptake, demonstrating the need for a new formulation to target lymphatic metastases. 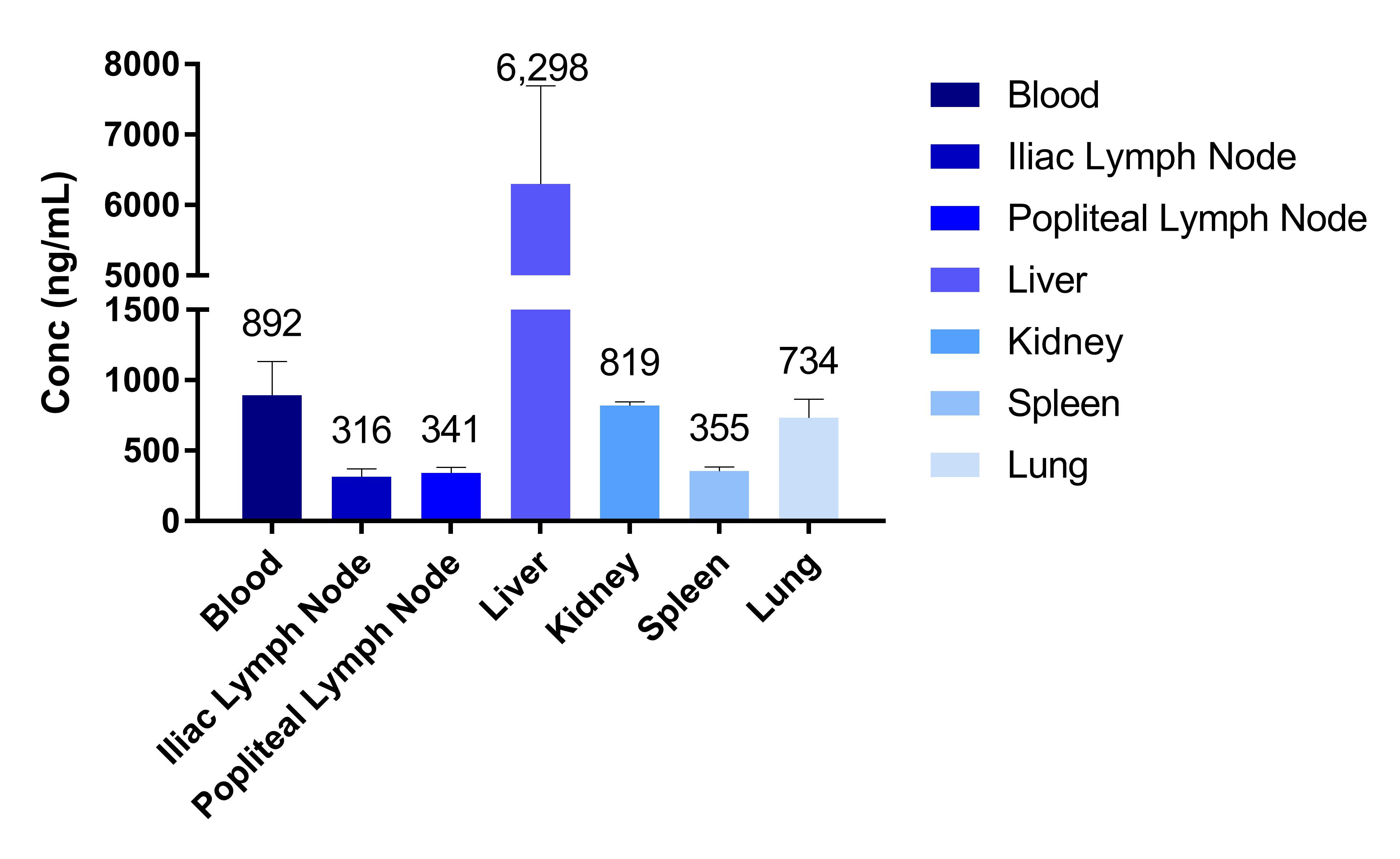 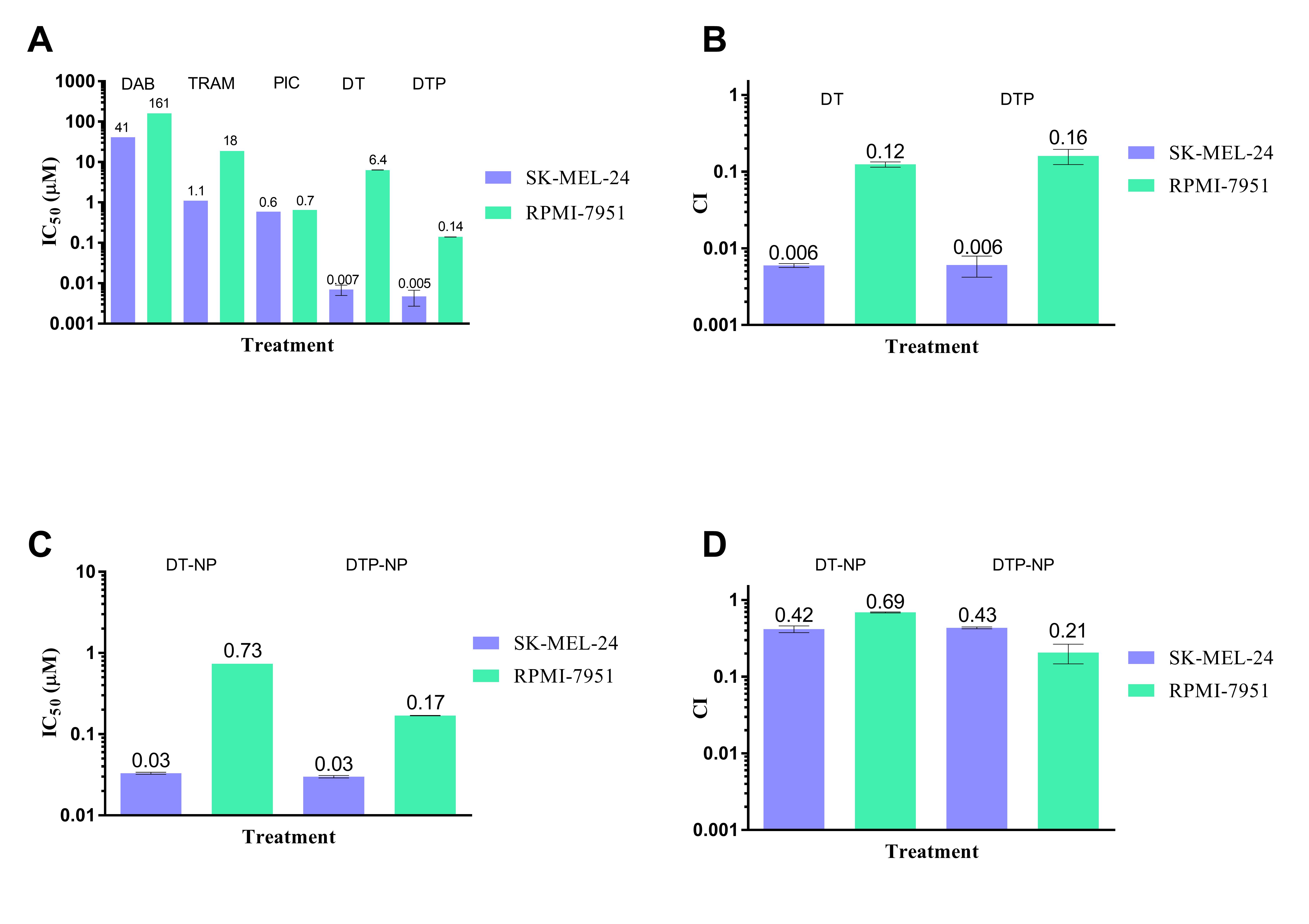