Purpose: Liposomes are one of the oldest nanoparticle formulations made, and are until today a very attractive carrier system for various drugs. Their appeal lies in their similarity to the biological membranes and the lipid composition that decreases their cytotoxicity[1]. Visualizing how different liposome classes, interact differently with cells is very important as it helps in the choice of the suitable drug to be loaded and the location of its delivery. In this work two different liposome classes, namely “pH-sensitive” liposomes composed of the neutral lipid dioleoylphosphatidylethanolamine (DOPE) known to cause membrane instability combined with the acidic molecule cholesteryl hemisuccinate (CHEMS) for stabilizing the formed liposomes, and the “fusogenic” liposomes composed of the cationic lipid 1,2-dioleoyl-3-trimethylammoniumpropane (DOTAP) combined with DOPE, were examined visually for their interaction with murine brain endothelial cells (bEnd.3) using confocal laser scanning microscopy (CLSM).


Methods: Preparation of Liposomes: DOPE: CHEMS (pH-sensitive) and DOPE: DOTAP (fusogenic) liposomes were prepared in a 1:1 molar ratio in chloroform according to the thin film hydration technique[2]. In brief chloroform was evaporated under vacuum using a rotary evaporator at 40 oC until a thin lipid film was formed then it was rehydrated with 20 mM HEPES buffer at 25oC with agitation followed by extrusion through a 100 nm polycarbonate membrane and diluted to 1 mM. Characterization was made using the Nanopartica SZ-100 (Horiba, Japan).

Both liposome classes had a particle size below 150 nm. The zeta potential of the fusogenic liposomes containing the cationic DOTAP lipid had a high positive charge in comparison to a negative one by the pH sensitive liposomes due to the phosphatidyl group orientation of the neutral lipids to the outer surface (Table 1).

CLSM: Imaging after 15 minutes of addition of the DiI labelled liposomes showed fast endocytosis of the pH-sensitive liposomes without cargo (calcein or FITC-dextran 4KDa) release, inversely fusogenic liposomes interacted with the cell membranes and released their cargo directly intracellularly which is characteristic of fusion (Figure 2).


Conclusion: Different liposome classes interact differently with bEnd.3 cells as visualized by CLSM. PH-sensitive DOPE: CHEMS liposomes were seen to be quickly endocytosed without cargo release after 15 minutes of addition. On the other hand fusogenic DOPE: DOTAP liposomes showed superiority over the pH-sensitive liposomes by fusing with the cellular membranes and delivering the cargo in a very short time period of 15 minutes intracellularly. 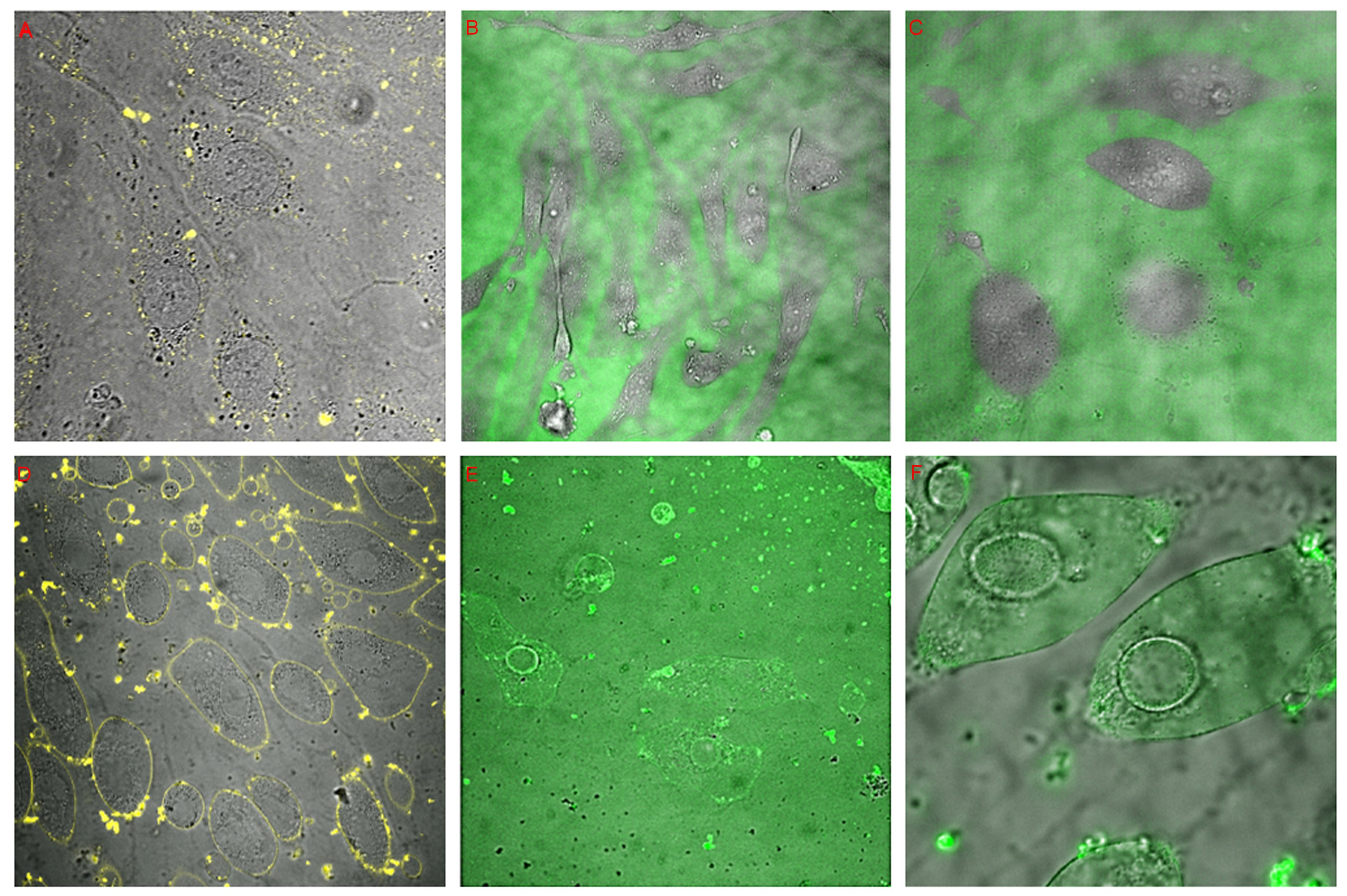