Purpose: Triple-negative breast cancer (TNBC) is the subtype of breast cancer that lacks estrogen receptor, progesterone receptor, and human epidermal growth factor 2 (HER2) expression. It is the most aggressive breast cancer subtype characterized by higher metastatic and reoccurrence rate. The pick risk of reoccurrence within three years of disease and survival rate at five years is only 20%. More than half of the TNBC patient experiences metastasis of cancer within two years of detection of the first symptoms. 28% of TNBC patient suffers from brain metastasis. Studies suggest that TNBC has particular propensity to metastasize to the brain. Due to the lack of hormonal and HER2 receptor expression, chemotherapy is the only option for systemic therapeutics.

Penfluridol (PFL), an antipsychotic drug, has been reported to exhibit activity against certain types of cancer including TNBC. Repurposing of PFL as an agent for the treatment of metastasized TNBC has its advantages, including long half-life and ability to cross the blood-brain barrier (BBB). However, there are certain drawbacks, such as inhibition of the dopamine and serotonin receptor at the nanomolar level that potentially can result in severe neurotoxicity. These side effects eventually hinder a potential of PFL as a chemotherapeutic drug. One of the projects in our group is focused on the developing of novel analogs of PFL with the comparable cytotoxicity and ability to cross the BBB but reduced/eliminated activity at CNS receptors.


Methods: We have designed and synthesized a library of molecules mimicking the 3D structure of PFL. Our initial in vitro screening included determination of compound’s cytotoxicity, where we have selected compounds with the IC50 below 10 µM. Further, we have used ligand binding assay to measure the ability of selected compounds to inhibit major CNS GPCR receptors at 10 µM concentration. If the inhibition was at 50% or higher, the Ki was determined. Finally, selected compounds with the least affinity to CNS receptors were assessed for their ability to cross the BBB using in vivo PK model and hit compound was identified. Further, we have used a standard SAR approach in medicinal chemistry to optimize potency and drug-like properties of this selected compound.


Results: SAR studies were performed in three major structural areas of the hit compound: phenyl urea, alkyl linker, and di-phenyl moieties. We have identified that phenyl urea is the part of the molecule that is responsible for the observed cytotoxicity. In particular, electron withdrawing groups at the m- and p- positions of the phenyl ring lead to the increased anticancer activity, whereas the opposite effect is observed for o, p-disubstitution. Introducing the electron donating functionalities at any site of this moiety diminishes the ability of a compound to kill cancer cells. Methylation of urea or introduction of thiourea entirely abolishes the activity. Structural modifications at the di-phenyl part of the molecule have no direct effect on the overall potency of a compound and can be used for the optimization of the physiochemical properties of the molecules. Currently, our most cytotoxic compound from this series has IC50 of 4.5 µM (MDA MB 231), while the SAR is still ongoing. Moreover, we are working on the identification of the pathways that are affected by these compounds.

Our CNS screening identified no significant interaction with the dopamine, serotonin and opioid types of the receptors though few of the molecules showed strong interaction with monoamine transporters and were excluded from the set of anticancer agents.

Finally, our PK analysis has shown that molecules can cross the BBB and 200-800 nM of compounds were found in the brain after 6 hours post administration (10 mg/kg, IP). Analogs of this series are mostly deposited in the fat tissue as well as in the lung. We envision that these parameters are compatible with the potential therapeutic use of this class of agents. However, further studies are needed to evaluate the full toxicity profile.


Conclusion: We have discovered a novel series of cytotoxic compounds that possesses cytotoxicity toward MDA-MB-231 and MCF-7 cell line, ability to cross the BBB and that have shown minimum interaction with CNS receptors. These compounds were shown no signs of the toxicity in vivo. We envision that these compounds can be further developed into a potent treatment of metastatic breast cancer. 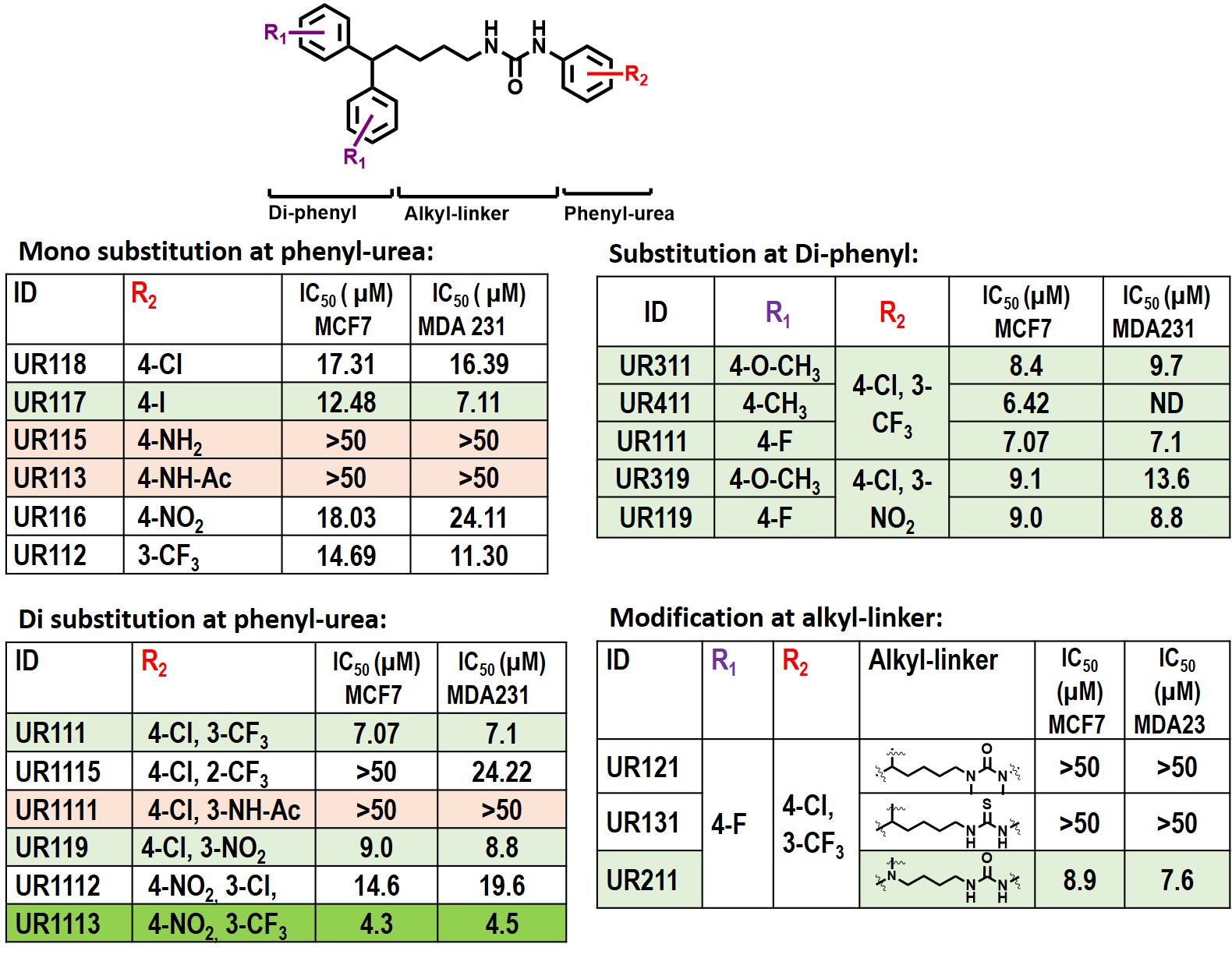 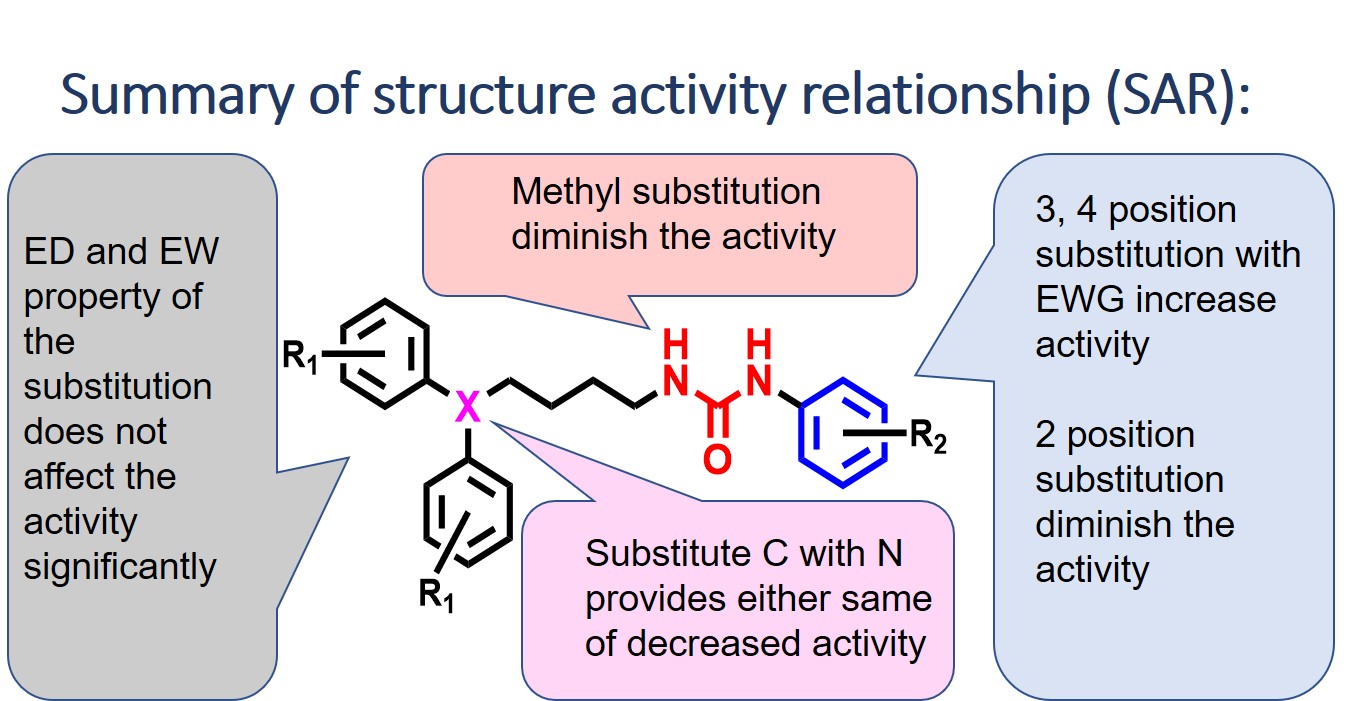