Purpose: One of the most popular delivery systems for oral controlled release forms is hydrophilic matrix tablets using water soluble polymer such as hypromellose, which are widely used. Although developing hypromellose matrix formulation may seem simple, a large number of variables need to be considered for a valid formation with the desired release kinetics. The present study was to apply a quality by design (QbD) polymer set in which % hydroxypropoxyl group (%HPO) and particle size levels across the design space were varied. Theophylline tablets were prepared by wet granulation method using hypromellose 100,000 mPa∙s. The samples in the QbD sample sets were utilized to create the controlled release tablets. Also Evaluation of the influence such as dissolution rate of tablets was discussed.


Methods: Theophylline (87.0%) and hypromellose (8.7%) were mixed in 3D mixer and the blended material was granulated using PVP K30 solution (2.8%) dissolved in Isopropyl alcohol as binding agent for suitable granules properties. The granules are dried in convection oven at 50℃ for 2hours and were passed through #20 mesh screen. The screened granules were lubricated with magnesium stearate (1.5%) for a one minute. And then tablets were compressed into 230mg using 10mm round concave using single tablet press at 15kp compression pressure. A total of nine formulations were prepared for each polymer level using full factorial experimental design. In vitro dissolution studies of theophylline tablets were carried out using USP Apparatus II, with paddles at 100rpm in 1000mL of pH6.8 phosphate buffer at 37℃. The drug release was determined spectrophotometrically at 271nm.


Conclusion: Both studied quantitative factors such as %HPO and particle size of hypromellose proved to have important influences on drug release profiles of the tablets. Hypromellose with higher than 9.5% on %HPO content and higher 50% through 230mesh demonstrated the robust hydrophilic matrix which has low tablet-to-tablet variation. The QbD approach was used in this study as a strategy for the design of a controlled release tablet formulation in order to minimize the fluctuations of drug release level. 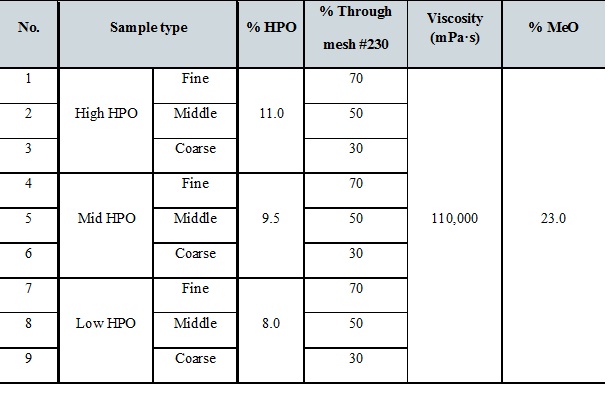