Purpose: Pemetrexed, therapeutics for non-small cell lung cancer and pleural mesothelioma, is commonly provided as lyophilized injections, due to its extremely unstable property in solution. In general, pemetrexed is rapidly oxidized and this reaction is accelerated in aqueous solution. Although there are many studies for stability improvement of pemetrexed in solution, no critical factors for it were found. So, the purpose of this study is to investigate the factors that affect stability of pemetrexed in solution.


Methods: Pemetrexed disodium salt, D-mannitol, and each antioxidant (sodium sulfide, sodium sulfite, sodium metabisulfie, acetylcysteine, L-cysteine HCl, vitamin E TPGS, and monothioglycerol) were dissolved in water, and pH were adjusted to around 7.5. After 0.2 μm membrane filtration, it was loaded in a glass vial. The dissolved oxygen was removed and headspace air were replaced with nitrogen gas. The pemetrexed formulation was placed at various storage condition with box packaging to avoid light. During the proportion of antioxidants in the formulation kept maintaining, the effect of API concentration (12.5, 25, and 50 mg/mL), pH (6.0 ~ 8.5), dissolved oxygen (1 to 7 ppm), and headspace oxygen (1 to 11%) in vial on the stability of pemetrexed formulation were evaluated. Degradation products were measured by HPLC, and solution color was observed by spectrophotometer and visual inspection. The headspace oxygen concentration was measured using a non-destructive headspace oxygen analyzer. Additionally, the role of antioxidant was confirmed by quantifying the amount of antioxidant using HPLC and ICP-MS analysis. 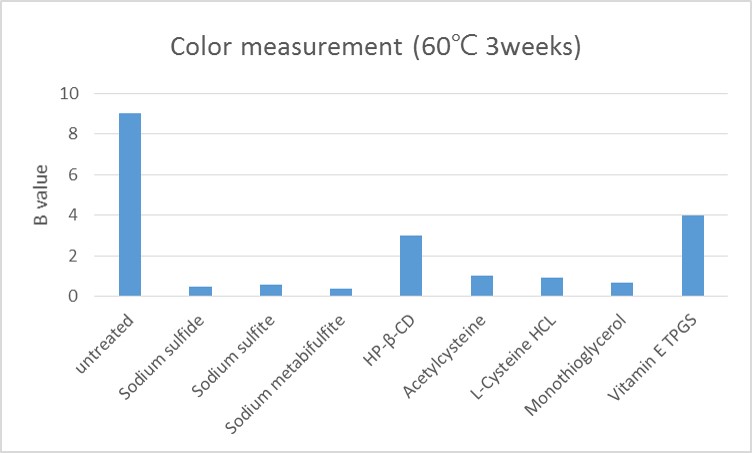 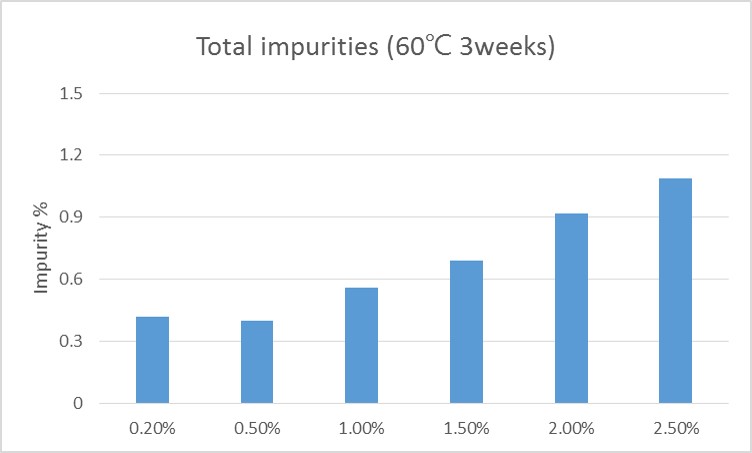