Purpose: Computer modeling can aid pharmaceutical formulators in designing and optimizing formulations while reducing time and cost spent on formulation development, unlike the traditional trial-and-error approach. Formulating for EfficacyTM (FFE) is an in silico modeling program that helps design and optimize topical formulations using the active and inactive ingredients’ Hansen Solubility Parameters to achieve optimal skin penetration. FFE is also capable of modeling skin diffusion studies to help decide which prototypes are the most promising to be moved forward to formulation and testing. FFE’s potential as a predictive tool for drug delivery has only been evaluated in a few studies, which were primarily focused on cosmetic emulsions. The aims of this projects were to 1) utilize FFE to design and optimize emulgels for ibuprofen using various penetration enhancers, 2) study the emulgels’ physicochemical characteristics, including pH, viscosity, spreadability, appearance, droplet size, and stability, and 3) evaluate the emulgels’ release in vitro, and permeation in vitro and ex vivo.

Emulgels were designed using FFE. pH was determined using a pH meter. Viscosity was tested with a viscometer. Spreadability was evaluated with a texture analyzer. Appearance was checked visually. Droplet size was analyzed using a light microscope. Stability was tested at 25°C and 45°C for 6 months. Solubility of ibuprofen in the penetration enhancers was determined in lab experimentally.


Results: In-silico studies FFE helped select 5 penetration enhancers (and solvents at the same time) for ibuprofen. The ingredient active gap (IAG), i.e., similarity of the solvent and ibuprofen, was the lowest for OA and DMI, and the highest for water. The best solvent for the oil phase was found to be OA, while for the water phase, DMI and DGME were found to be the best. A substantial difference was seen in the ratio of AFG (active-formulation gap) to SFG (skin-formulation gap) for the oil phase vs water phase. The AFG and SFG numbers indicated that the combined oil- and water-soluble skin penetration enhancers would provide a higher thermodynamic activity for ibuprofen, thus, have a higher penetration. Solubility predictions by FFE were in good correlation with the experimental solubility results.
Physicochemical characteristics
All emulgels were opaque, glossy, and monodisperse emulsions with a droplet size of 2‑3 µm. The pH of all formulations was skin compatible (5.5-6.1). All formulations exhibited pseudoplastic behavior. Viscosity and spreadability results confirmed that our formulations were comparable to a marketed emulgel (Voltaren). All emulgels were stable at 25°C for 6 months.
Performance studies
The cumulative amount of ibuprofen released at 24 hours was in the following order from highest to lowest: OA+DGME < OA+DMI < IPM < marketed emulgel < OA < OA-PEG 400 (Image 1). OA+DMI and OA+DGME had significantly the highest amount of ibuprofen permeating in vitro in 24 hours (p< 0.01, Image 2), their flux was higher than other emulgels’ flux, and the same as the marketed gel’s flux (p< 0.05). OA and OA+DGME was tested ex vivo, and OA+DGME significantly outperformed OA (p< 0.05, Image 3). A lower amount of drug permeated ex vivo, however, the tendency of permeation was similar in vitro and ex vivo


Conclusion: In silico results indicated that very different penetration enhancers, i.e., OA combined with either DMI or DGME, were the best combinations for boosting the skin penetration of ibuprofen. Indeed, in vitro results proved that OA+DGME, and OA+DMI worked the best. Similarly, OA+DGME was significantly better ex vivo than OA. The in vitro and ex vivo permeation results correlated well with FFE predictions, confirming the predicting skill and reliability of FFE. FFE was a fast, valuable and reliable tool for aiding in topical product design for ibuprofen. 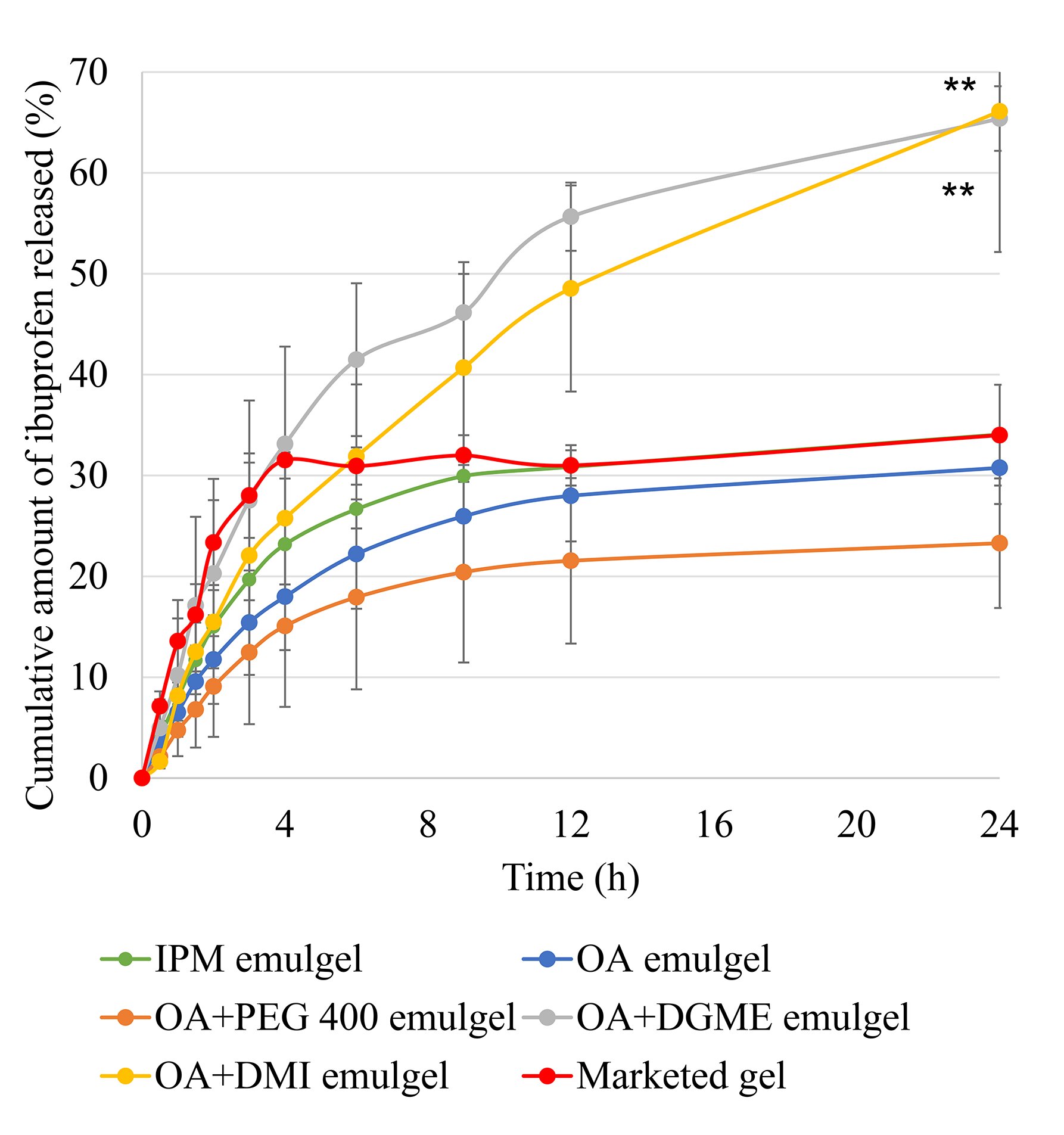 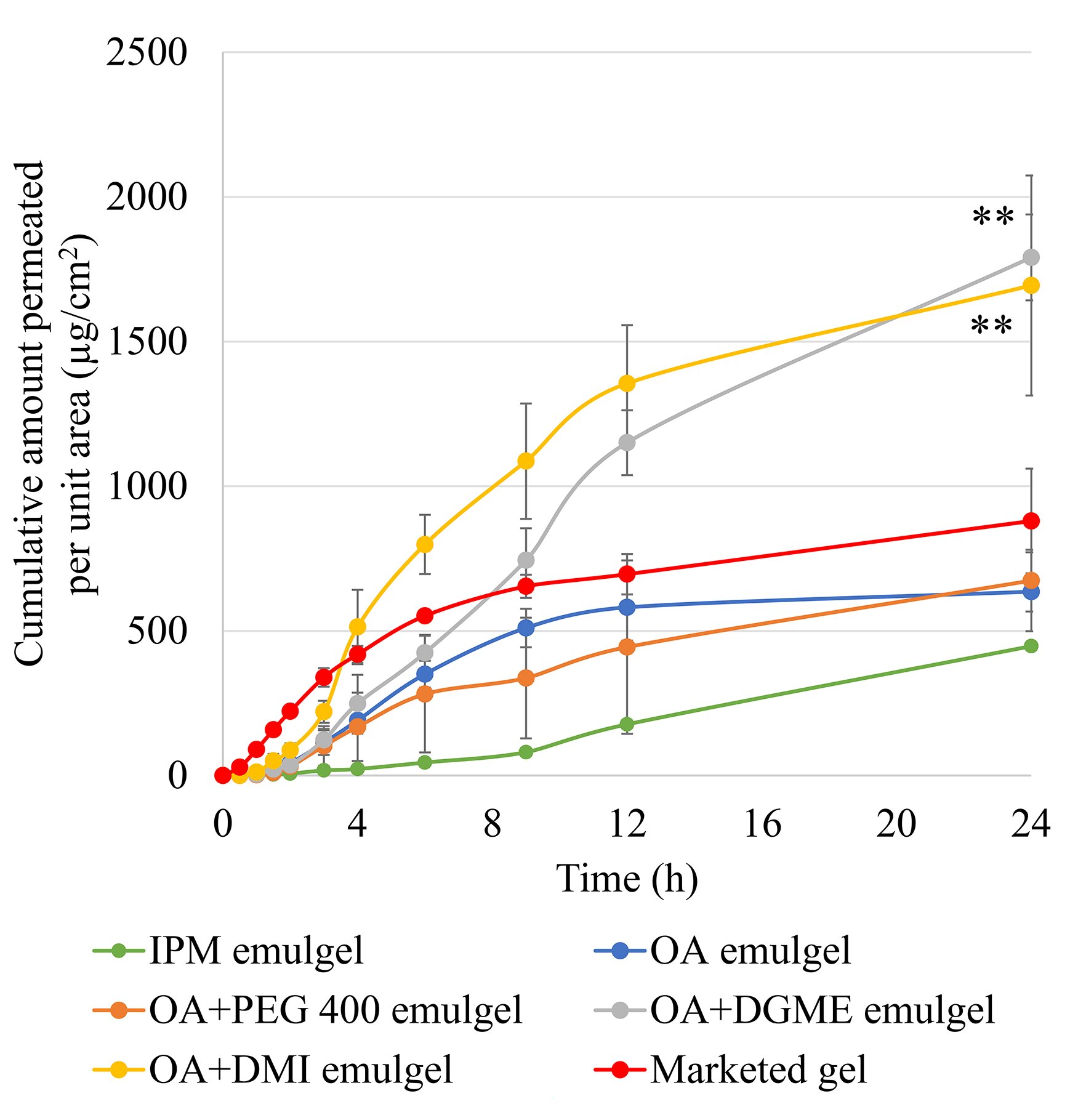 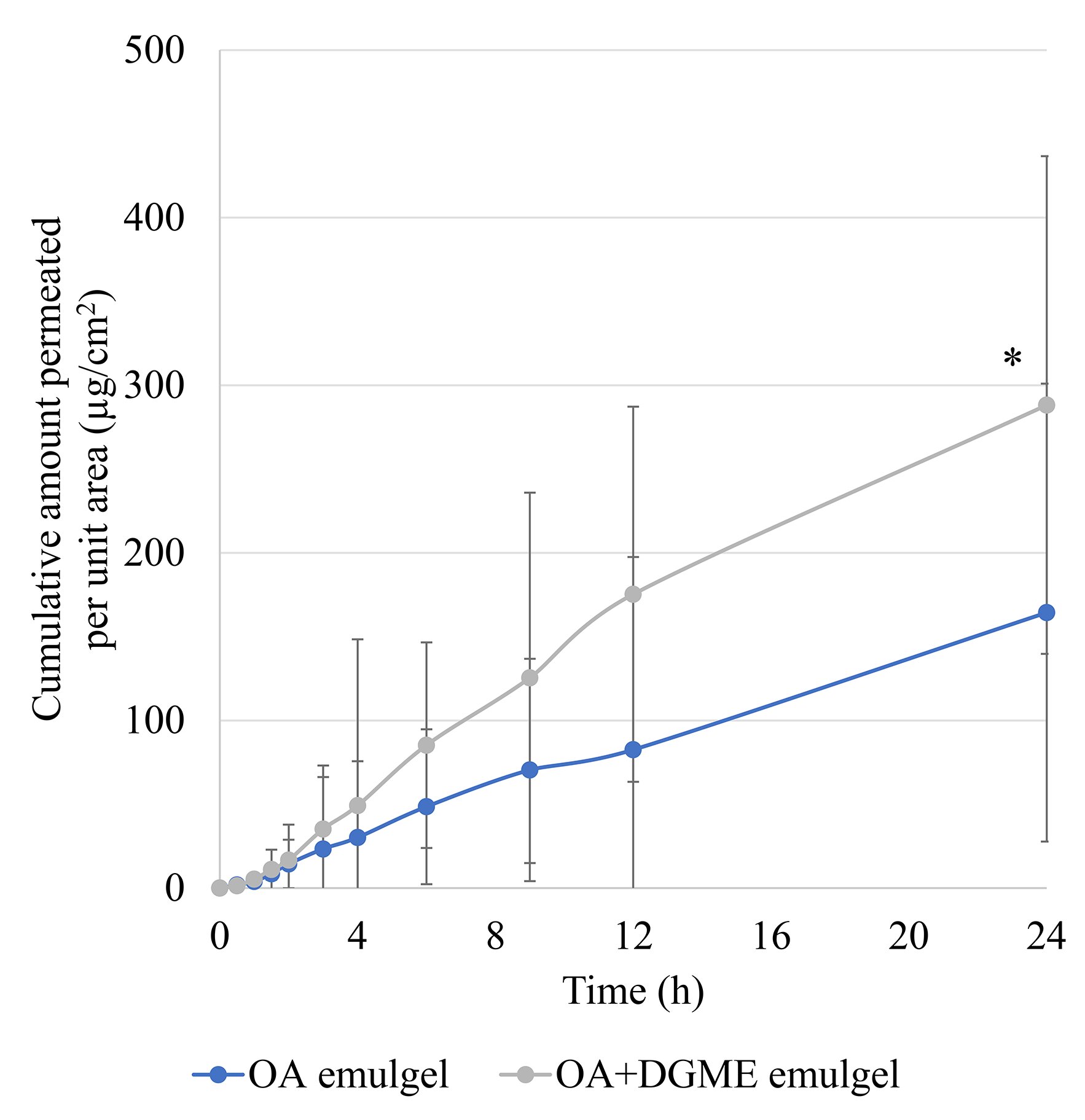