Purpose: Triple Negative Breast Cancer (TNBC) is one of the most aggressive type of breast cancers, comprised of 15-20% of all types and characterized by lack of estrogen receptor (ER), progesterone receptor and Human epidermal growth factor receptor 2 (HER2) expression. Although they are chemo-sensitive, they are found to metastasize rapidly and characterized with poor prognosis and low therapeutic options. However, membrane Androgen receptor (mAR) are found to be expressed in certain TNBCs which when inhibited, cause alterations in cell signaling pathways by modulating the intracellular signaling cascades. Bicalutamide (Bical), an anti-androgen therapeutics which functions by inhibiting the AR, is widely used as a medication in the treatment of prostate cancer. However, clinical trials with Bicalutamide and other antiandrogen drugs in TNBC have shown limited efficacy with a ~19% clinical benefit rate. Hence, in this study, we aim to enhance the therapeutic efficacy of Bicalutamide by activating the drug using Cherenkov radiation (CR) using FDG in the targeted treatment of TNBC with high specificity. Fludeoxyglucose 18F (FDG), a clinically used radiopharmaceutical PET tracer, was used as the source of CR, which is formed as a result of decaying beta (b) particle emitting radionuclides that in turn generates ultraviolet (UV) light in aqueous media.


Methods: Cultured MDAMB231 cells were stained with PE conjugated AR (D6F11) XPâ monoclonal antibody and analyzed for AR expression in flow cytometry. In vitro MTS assay was performed in MDAMB231 cells and MCF10A (normal breast epithelial cells) to assess toxicity of CR mediated Bical at various sub-toxic doses (25, 12.5, 6.25mM), followed by addition of different activity of FDG (0.2, 0.4, 0.8mCi). Cell viability was evaluated after 72h by measuring the mitochondrial activity in live cells using MTS reagent by absorbance measurement at 490nm. RNA sequencing analysis was carried out to understand the changes in expression at mRNA level as a result of CRIT by Bical (0.2mCi, 25mM) in MDAMB231 cell lines. Total RNA was extracted using Qiagen RNA mini extraction kit and the eluted RNA were subjected for NGS library preparation and sequencing by Illumina HiSeq 2500 in triplicate. Further, gene expression profile was generated using the Bioinformatic tools like the gene classification tool from DAVID Bioinformatics.


Results: Flow cytometry analysis showed that 81% cultured MDAMB231 cell lines stained positive for AR expression. Therefore, AR was found to be one of the potential therapeutic target to study its therapeutic efficacy with CR-induced Bical in triple negative MDAMB231 cell lines. IC 50 of Bical in MDAMB231 cell lines was obtained to 65mM and toxicity has been enhanced significantly by the exposure of 0.2mCi FDG (as it lies within clinically safe dosage limit) in the cancer cells at 25mM of Bical concentration which is in sub-cytotoxic dose. The combination of Bical and FDG treatment was found to induce more cell death than that in the other treatment groups and the control group. The heat map of differentially expressed 76 genes was plotted from the gene list obtained by RNA sequencing Analysis, at the most significant level of P value < 0.01 and Log fold chain value (LogFC) > 2. CXCR5, B3GAT1, NCAM1, HP are the genes that observed to be in the overexpressed gene list with high level of significance with on comparison with the untreated group of logFC > 5, while RNASE1 is observed to be downregulated with the treatment group. Moreover, these 4 genes are altered significantly in their expression with CRIT, mainly associated with breast cancer, among 76 differentially expressed genes.


Conclusion: Therefore, Cherenkov radiation from radiopharmaceuticals enhances the efficacy of Bical and potentially structurally similar antiandrogen drugs, at doses lower than the conventional IC50 values. Overexpressed proteins on post treatment were identified and RNA sequencing studies are being carried out to recognize the therapeutic proteins and underlying signaling pathway involved in the mechanism of induced cell death. Further studies have to be carried out to determine the toxicity and efficacy of combination radiopharmaceutical-Bical in mouse tumor models. 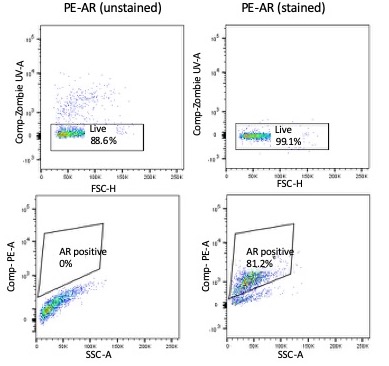 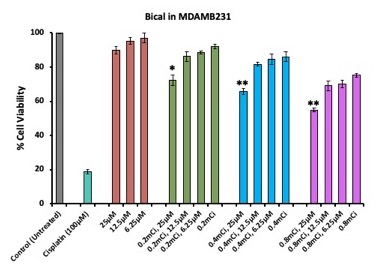