Purpose: Metformin hydrochloride, a type 2 diabetes hypoglycemic agent, has a high solubility in water, and the initial release occurs rapidly, resulting in side effects. Therefore, there is a need to reduce side effects and increase the convenience of taking medications. In addition, metformin has a low fluidity and compressibility, and it is intended to improve this by wet granulation rather than dry granules with disintegration process.


Methods: Metformin hydrochloride, PEO 8000k, Carbomer 940, and the granules were measured by FT-IR to analyze the chemical binding. DSC was used to measure the heat transfer, and crystallinity was analyzed by PXRD to confirm whether the wet granules were properly formed. A scanning electron microscope was used to observe particle states and surfaces. In addition, HPLC was used to evaluate drug release behavior and in vitro dissolution behavior of metformin hydrochloride sustained release formulation.


Results: 1. Analysis of the structural properties of granular materials. FT-IR was performed to confirm that the original drug, metformin hydrochloride, and PEO 8000k and carbomer 940, which were used as a sustained release, were well mixed in proportions and made into wet granules. Metaphorin hydrochloride peaks were mainly observed in each batch, and each batch was observed to have an increased peak by the ratio of PEO 8000k, carbomer 940. In addition, since the peaks due to the new binding can not be observed, it is considered that only physical mixing or weak interaction between drug and excipient is observed.

3. Analysis of crystallographic characteristics of granules. XRD was measured to confirm that metformin hydrochloride and wet granules were formed normally. The ideal form of wet granules is that the polymer used as a sustained release encases the drug and should not have a peak of the drug on the surface.

4.Morphological characterization of granules. The crystals of metformin hydrochloride were observed and the surface of each particle was observed to observe the size and shape of the wet granules. Metformin hydrochloride showed a relatively large crystal size of 150 ~ 500 μm, and PEO 8000k showed aggregated particles. In the case of Carbomer 940, fine particles are dispersed. Batch 1-8 shows that the granulated particles can be observed with a larger drug than PEO 8000k. The amount of granule was observed to be higher in Batch 8, and the crystal of the raw drug was less observed.

5. In vitro dissolution behavior of metformin sustained release. Metformin hydrochloride has high solubility in water and drug release occurs too quickly when taken directly. Therefore, in this study, a sustained - release tablet was prepared and dissolution test was conducted for 24 - hour drug release. The ideal sustained-release graph shows that after 3 hours, 50% of the efflux is released after about 12 hours and then about 80% of the effluent is released. In Batch 1 and 3, over 80% release occurred in the initial 3 hours and more than 95% of the drug released after 12 hours. In batches 3, 4, and 5, drug release was slower as carbomer 940 ratio increased. Drug release by PEO 8000k ratios can be seen in batch 2, 5 and 7 when drug release is delayed. However, the effect of carbomer 940 is more effective in retarding drug release than PEO 8000k. Therefore, by controlling the ratio of carbomer 940 with a fixed PEO 8000k ratio, effective drug release can be controlled. In batch 8, where the two release-retarding polymers were designed at the highest rate, the dissolution rate was 77% at 12 hours and higher at batch 7. Compared with the ideal sustained-release graph, batches 7 and 8 are considered to be the most suitable formulations.


Conclusion: In this study, a sustained release formulation was prepared by wet granulation using a water - soluble drug, metformin, using carbomer 940 and PEO 8000k as release - retarding polymers. The wet granules were analyzed by FT-IR, XRD, DSC, and SEM. The wet granules were formed properly and the shape of the wet granules was determined according to the ratio of the form and various excipients. In vitro excretion behavior was affected by the release retarding polymer, Batch 1 and 3 were not suitable as a sustained-release formulation and batch 7 and 8 were suitable. 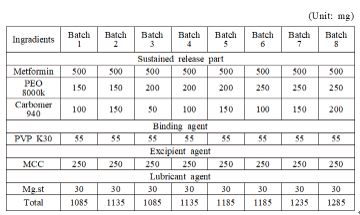 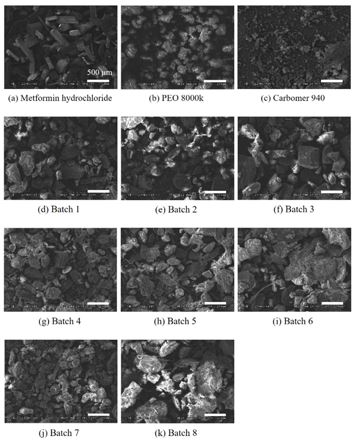 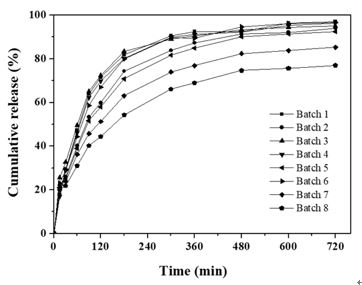