Purpose: Toll-like Receptors (TLRs) are a validated target for developing new immunostimulatory drugs.1 Activation of Toll-like Receptor 7 and 8 (TLR7/8) is associated with a Th-1 biased (cell-mediated) immune response, as opposed to a Th-2 humoral (antibody) response.2 The cell-mediated immune response primarily helps eliminate intracellular pathogens, such as viruses, that may have limited exposure to humoral defenses.3 The cell-mediated immune response is also crucial in the host regulation of improper cell replication and development of cancers.4 For these reasons, small molecule agonists of TLR7/8 are highly sought after for the development of new vaccine adjuvants or antitumor agents. Since imidazoquinolines have been proven to be useful TLR7/8 agonists, significant effort has been put forth to develop the structure-activity relationship (SAR) and to help identify potent and effective imidazoquinolines suitable for vaccine adjuvants and cancer treatments. To date, the SAR investigations of imidazoquinolines have mostly focused on the N1 and C2 positions. Recently, the disclosure of the crystal structure of 2 bound to the TLR8 receptor provides evidence that the C7 position might tolerate changes better than other aryl positions.5 To investigate this hypothesis, we synthesized various C7 substituted derivatives (Figure 1). In this initial study, we explored the influence of electronic effects at the C7 position through the addition of electron withdrawing and electron donating groups (EWGs and EDGs).


Methods: The compounds (3-8) were synthesized using a route found in Gerster et al.6 The nitriles (9-12) were synthesized using a procedure from Littke et al.7 The average EC50 values were determined from three independent measurements at 10 or more, full concentrations, performed in quadruplicate using either hTLR7 or hTLR8 transfected HEK-Blue cells along with corresponding Null controls from InvivoGen. The cytokine production was measured in triplicate at 20 µM using canine leukocytes.


Results: The table of the results can be seen in Table 1.


Conclusion: We observed that changes to the N1 and C2 positions combined with the C7 position maintained activity trends consistent with findings from others. We also observed that TLR7/8 tolerates all of the target C7 substitutions made in this study. We also observed a trend that EDGs at C7 of imidazoquinolines are stronger activators of TLR7/8 when compared to EWGs. This study also found TLR7/8 activating substitutions generally increased TNFα and IL-12 cytokine responses and that TLR8 activation potentiated an IFNγ response. However, one compound, 13, breaks this trend. Despite being one of the strongest TLR7 selective agonists 13 barely potentiates any cytokine induction. Other notable compounds produced from this study are 4, 7, and 13 which are up to 4-fold and 2-fold more active than resiquimod, 2, for TLR8 and/or TLR7, respectively, and up to 100x more active than the FDA approved imiquimod, 1, for TLR7. Only a few TLR7/8 agonists have been reported to date with < 100nM activity, and this is the first report of high potency agonists based on modifications at the C7 position. The results from canine leukocytes show that different C7 functionalities alter the agonist-cytokine response profile. These new C7 substitutions reveal that there is room to make changes at this position and more functional groups should be evaluated in the future in the hopes of finding new reactive handles to develop and formulate new prodrugs of imidazoquinolines. 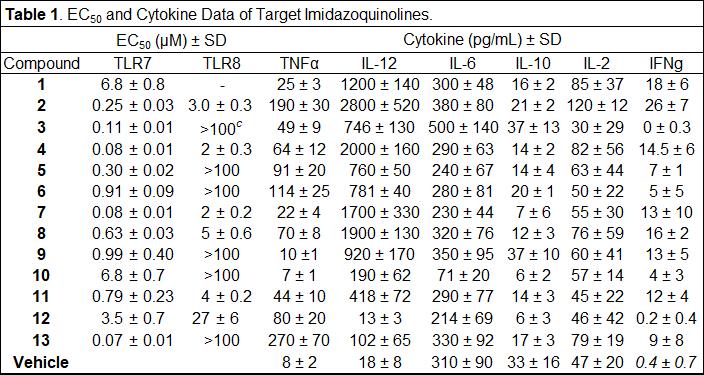