Purpose: In the absence of a safe and long-term effective cure, chronic pain is considered as an unmet medical need that requires the advancement of alternative, effective, and safe treatments utilizing new targets.1 Sigma-1 receptors (σ1Rs) are associated with pain modulation, nerve injury, and neuroinflammation.2 Interestingly, E-52862 is a selective σ1R antagonist currently in Phase II clinical trials for neuropathic pain treatment as monotherapy or an opioid adjuvant.3 Thus, σ1Rs have been demonstrated to be valid and attractive targets to treat chronic pain and to develop novel pain medications.2,3 Benzothiazolones are considered to be privileged scaffolds that have attractive drug likeliness properties, and benzothiazolone-based ligands have shown good affinity at σ1Rs. Remarkably, the benzothiazolone derivative SN56 and its fluorinated analog CM304, developed by our group, showed subnanomolar affinity and high selectivity toward σ1Rs.4 Additionally, CM304 demonstrated antiallodynic effect in the mouse chronic constriction injury assay. Unfortunately, both analogs displayed short in vitro half-lives (t1/2 = 1.0, and 1.6 minutes respectively) and extensive metabolism. Exocyclic amine derivatives (II) developed by our research group showed a slight improvement in the metabolic stability (t1/2 = 1.23-4.32 min), while retaining the affinity in the nanomolar range. Additionally, Bergkemper et al., reported σ1Rs antagonists with an exocyclic amine moiety (III) demonstrated high σ1R affinity and improved metabolic stability with 70% compound remaining after 1 hour, (Figure 1).5 In order to improve the metabolic stability and investigate the Structure-Activity Relationships (SARs) of the synthesized derivatives, we performed the following modifications: 1) moved the nitrogen atom outside the ring, 2) utilized different ring sizes, and 3) introduced 6-acyl/alkyl substitutions on the benzothiazolone ring (Figure 2). This work represents our continuous investigations into the SARs and structure metabolism relationships (SMRs) of the benzothiazolone derivatives targeting σ1Rs to help designing selective σ1Rs antagonists that might be advanced as therapeutic candidates.


Methods: The starting materials, 3-(2-bromoethyl)benzo[d]thiazol-2(3H)-one derivatives (1-3), were prepared according to Bhat et al.6 Subsequently, the secondary amine derivatives (4-12) were synthesized through a nucleophilic substitution of the corresponding haloalkanes (1-3) with the appropriate cycloalkaneamines. These were then subjected to reductive amination by treatment with solid paraformaldehyde in methanol, followed by reduction with sodium cyanoborohydride to afford the tertiary amine derivatives (13-21). The cyclohexyl derivatives (4-6, 13-15) were evaluated for their in vitro binding affinities at σ1Rs in rat liver membranes using [3H](+)-pentazocine as the radioligand. The molecular docking of the cyclohexyl derivatives was carried out utilizing the σ1R crystal structure (PDB ID:5HK1) with MOE-2014 software, using an “induced fit” method. In vitro metabolic stability of all the synthesized compounds was conducted in rat liver microsomes.


Results: Overall, the exocyclic amine strategy showed slight improvement of metabolic stability (t1/2= 0.8 -2.1 min) compared to the parent compounds SN56 and CM304. As expected, the tested compounds showed a binding pose that allows for a favorable ionic interaction of the basic nitrogen and Glu172, π-stacking interaction of benzothiazolone with Tyr103 and the common hydrophobic interactions. Surprisingly, N-substituted cyclooctyl derivatives showed slightly better metabolic stability than their cyclohexyl counterparts. This may be due to the cyclooctyl ring being bulkier with a spatial conformation that may help to slow metabolism. Moreover, the docking study revealed the binding pocket is wide and can accommodate bulkier substitutions. Regarding 6-substituted benzothiazolones, both 6-acyl/alkyl derivatives displayed better stability than the 6-unsubstituted ones. Also, 6-acyl/alkyl can be engaged in interactions that improve the affinity as noticed in 6-propyl/propionyl (5, 6) which showed increased affinity (11.6, and 6.2-fold, respectively) compared to the unsubstituted ring (4). Moreover, this trend was confirmed by molecular docking that showed favorable contacts of propyl and propionyl substitution with Ala98, Leu95, Leu105, and Leu184. N,N-disubstituted analogs showed, to some extent, lower metabolic stability than N-substituted derivatives which may be due to the N-methyl is a substrate for N-demethylation. It is noteworthy that, N-methyl has irrelevant effects on the affinity and showed no interactions in the docking study suggesting the N-methyl is not essential for the affinity at σ1Rs. Finally, the most stable compound (22) is a secondary amine with cyclooctyl ring and 6-propionyl substitution.


Conclusion: The preliminary evaluation showed our findings are consistent with those recently reported by Bergkemper et al.,5 suggesting that exocyclic amine moieties could help to improve the metabolic stability while retaining the affinity at σ1Rs. The secondary amines demonstrated slightly improved stability compared to tertiary amines. Moreover, increasing the ring size from six to eight appears to be preferred in terms of stability and binding at σ1Rs. Regarding 6-substitutions on benzothiazolones, both 6-acyl/alkyl substitution showed improvement in stability and affinity than the 6-unsubstituted ones, which require more investigations. The collected information will aid in further SAR studies and optimization. 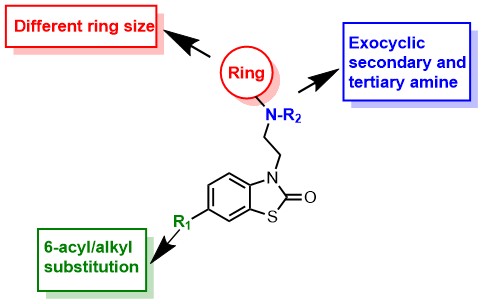