Purpose: Hydroxypropyl methylcellulose acetate succinate (HPMCAS), an anionic polymer, demonstrates wide applicability in drug delivery. It can be used as a carrier for amorphous spray-dried dispersions (SDDs) and thus enhance the solubility of BCS Class II compounds (e.g. Itraconazole (ITZ)). However, the grades of HPMCAS and drug loading can play roles in formulating. The aim of this study was to assess the grades of HPMCAS and drug loading influence on the thermal behavior and compaction profile.


Methods: The model drug, ITZ, was purchased from Letco Medical. HPMCAS L and H grades were purchased from Ashland. Preparation of SDDs: ITZ and HPMCAS dispersions were spray dried using Buchi mini spray dryer B-290. HPMCAS (L or H) was dissolved in a 2:1 (w/w) mixture of dichloromethane and methanol. ITZ was then added to the solutions to constitute 10 and 30% (w/w) of the total solid content in the solution. The total solid concentrations in the final solutions were 10% (w/w). The solutions were pumped into the atomizer at a rate of 16 g/min. The inlet and outlet temperatures were maintained at 100 and 56°C, respectively. The atomizing gas was set to 40. Thermo analysis: The glass transition (Tg) of ITZ was analyzed using a Discovery DSC 2500 by heating to 200°C at 10°C/min under nitrogen purge (50 mL/min) and Tg was the midpoint of the transition. Decomposition temperatures (Td) of SDDs were obtained using TGA 5500 at a heating rate of 10 °C/min from 30 to 500 °C under a constant flow of nitrogen (25 mL/min). Particle size distribution: Laser diffraction was utilized to measure the particle size by using a Master Sizer-2000 optical laser diffraction system. True density: True densities of SDDs and spray-dried ITZ were measured using a helium pycnometer Accupyc 1330. Compression methods: The compaction properties were tested by using Styl’One compaction simulator. 25, 50, 75 and 100 MPa compression pressures were applied under 5 mm/sec compaction velocity. Three replicate tablets were made and tested for each compression pressure. After compression, each tablet was weighed and measured for thickness and breaking forces with the use of MT50 hardness tester immediately following the ejection. Tabletability, compressibility, compactibility, elastic recovery and Heckel analysis were analyzed using the Analis™ software.


Conclusion: This study has shown that with the same drug loading, “L” SDDs had higher Tg, lower Td and lower true density compared with “H” SDDs. Meanwhile, they showed slightly better tabletability at high compression pressure (75 and 100 MPa), higher compactibility at low compression pressure (25 and 50 MPa), and higher elastic recovery. These differences may due to the particle size differences and the interactions between API and different grades of HPMCAS. Each SDD exhibited similar compressibility and mean yield pressure. With the same grade of HPMCAS, the SDDs with 30% of drug loading showed lower tabletability, compactibility and elastic recovery which correlated to the natural property of ITZ. 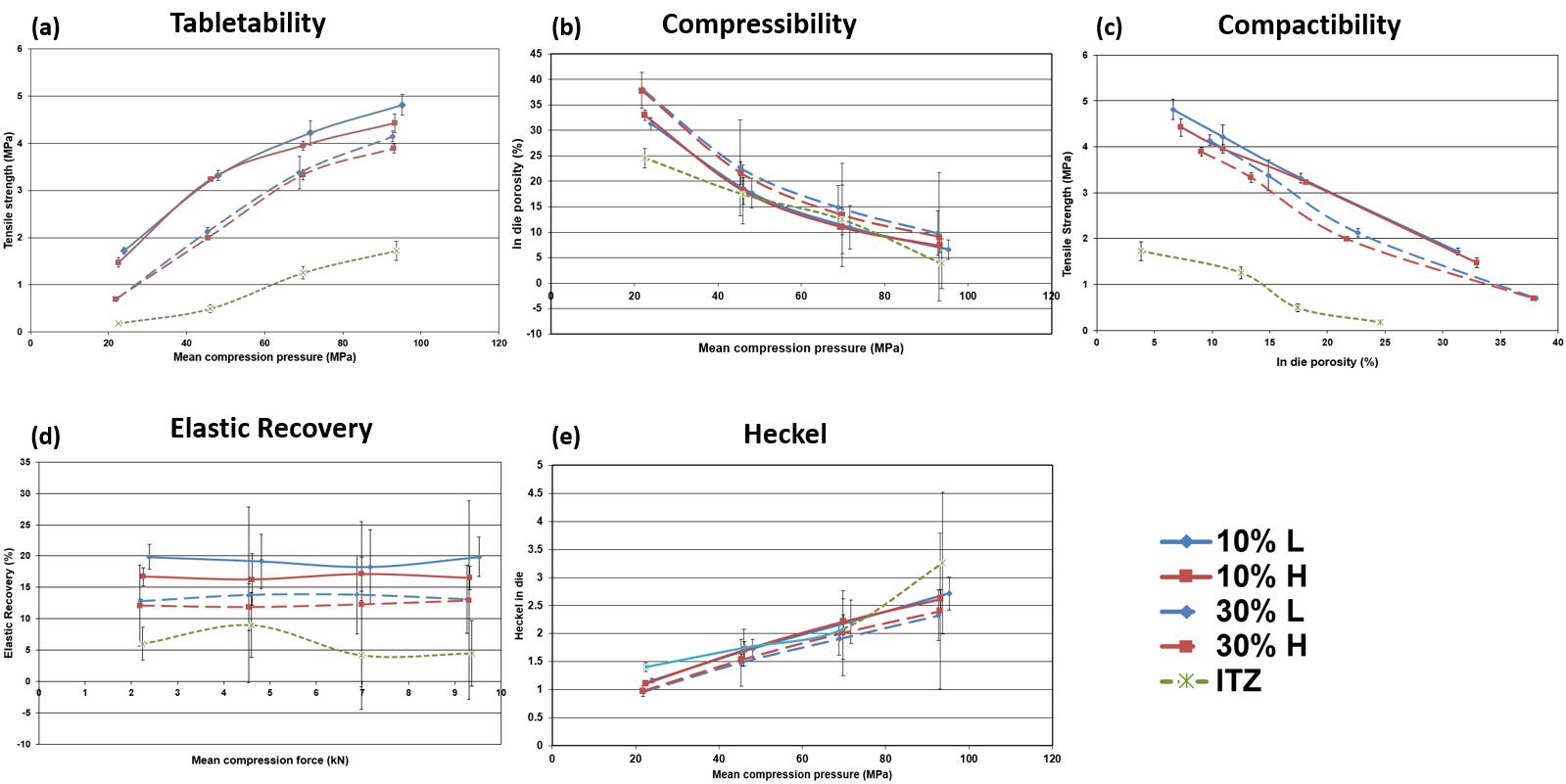