Purpose: Continuous melt granulation in co-rotating intermeshing twin-screw extruders is a solvent-free process to improve the flow and tabletability of powder blends. Leistritz nano-16 and micro-18 are commonly used for continuous melt granulation at different stages of product development. The Nano-16 extruder (trilobed) is designed with a minimal free volume to enable early development with a small amount of material (< 100 g). The micro-18 extruder (bilobed) is used to support phases 1 through 3 clinical trials (0.5 to 4 kg per hour). Leistritz micro-18 offers advantages, such as ability to scale up and flexible process design and control. Different drug-binder interactions and granulation mechanisms are anticipated for these two extruders because of the differences in screw geometry, free volume, and surface to volume ratio. This study aims to (1) investigate the difference in granulation behaviors and resulting granule properties between these two extruders and (2) determine the critical processing parameters that influence the chemical stability of gabapentin (GABA) for both extruders.


Methods: Twin-screw melt granulation (TSMG) of a hydroxypropyl cellulose (KlucelTM EF) and GABA mixture at 20:80 weight ratio was carried out using both extruders with 30° forward kneading elements. Assay and impurity (GABA-lactam) of GABA granules were analyzed using a reversed-phase HPLC method with UV detection. Tabletability of the granules was characterized using a compaction simulator (Presster®). The heat capacity and enthalpy of solution granules were measured with DSC and isothermal solution calorimeter. Apparent density of granules was measured using a helium pycnometer. Specific mechanical energy (SME) and degree of fill (DF) were calculated based on the extruder geometry and the process parameters.


Results: Granulation in Nano-16 could only occur at high DF ( > 18%) and high barrel temperature (≥110 °C), while granulation in Micro-18 occurred at all DF (4.2 to 50%) and even at low barrel temperature (60 °C). The correlation between GABA-L level and DF was positive and negative for TSMG using Nano-16 and Micro-18, respectively (Figures 1A). GABA-L level correlated positively with SME at each feed rate (Figure 1B) and with granule temperature across all feed rates for Micro-18 based GABA granules (Figure 2). The observed difference is attributed to the differences in screw geometry. Kneading element disc for Nano-16 (2.5 mm) is narrower than that for Micro-18 (5 mm); therefore, the intensity of dispersive mixing is lower for Nano-16. Additionally, the heat transfer between the barrel and processed material is more efficient for Nano-16 because of the shallower channel (max channel depth is 1.2 mm and 3.1 mm for Nano-16 and Micro-18, respectively). Since the intensity of dispersive mixing is lower for Nano-16, higher barrel temperature and higher DF are required to promote interactions between GABA and Klucel in order to facilitate granule growth. Granule formation in Nano-16 is attributed primarily to the axial compaction and heat transferred from the barrel. High DF allowed for greater axial compaction and more efficient heat transfer. At higher DF, formulation was subjected to higher shear stresses, which potentially lead to crystal defects or amorphization. On the other hand, granule formation in Micro-18 is based on the dispersive mixing at kneading elements. Therefore, higher SME achieved with higher screw speeds and lower feed rates led to an increased degradant level. Tabletability of granules prepared using Micro-18 was improved under all conditions, where higher SME corresponds to better tabletability. For granules prepared using Nano-16, no improvement in tabletability was achieved unless DF reached a threshold of 18%, above which the tabletability remained the same for all processing conditions.


Conclusion: The difference in the screw geometry between Leistritz Nano-16 and Micro-18 extruders resulted in different granulation mechanisms and different correlations between process parameters and granule properties. For Nano-16, DF was a critical parameter, where higher DF led to higher degradant levels and more compressible granules. DF. For granules prepared using Micro-18, SME was a critical parameter, where a higher SME led to higher degradant level and more compressible granules. The distinct behaviors call for close monitoring of both DF and SME to attain successful scale-up of TSMG from Nano-16 to Micro-18. 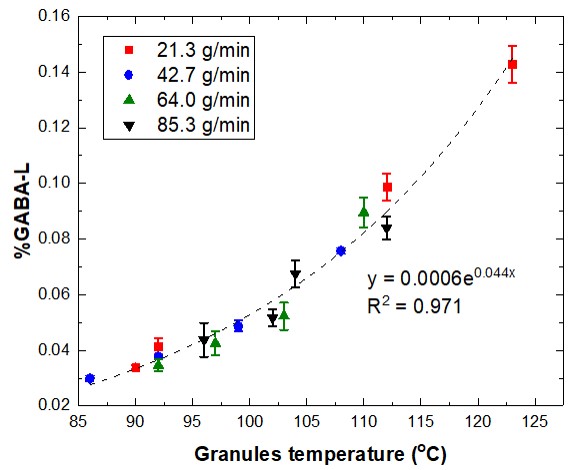