Purpose: Several drug delivery systems have been designed to help reduce prescription drug abuse by deterring and preventing tampering and misuse. Many of these abuse deterrent formulations (ADFs) utilize thermoplastic polymers to enhance mechanical properties and make the entire dosage form into a physically strong matrix that can resist mastication, crushing, and other particle size reduction efforts. When the thermoplastic polymer is hydrophilic, the formulation may also form a high viscosity gel in aqueous solutions which can make it more difficult to drawn up into a syringe for parenteral abuse. However, this does not successfully prevent the drug from being extracted and injected. Therefore, formulations that have abuse deterrent properties at multiple stages of abuse are needed. This study was conducted to develop a novel composition using a swellable ionic drug entrapping agent, croscarmellose sodium (XCMC) and a water-insoluble thermoplastic polymer matrix, polyvinyl acetate/polyvinylpyrrolidone (Kollidon SR), and to evaluate the stability of its various abuse deterrent properties over time. The thermoplastic polymer was used to improve the mechanical strength of the formulation and enhance resistance to physical manipulation, while the trapping agent serves to bind with the drug and lowers the amount of free drug available for extraction, potentially deterring intravenous abuse.


Methods: Tablets containing 100 mg of a model drug (dextromethorphan HBr or tramadol HCl) and 400 mg of a 3:5 binary mixture of XCMC:Kollidon SR were prepared under a 2000-pound force using a Carver press. Tablets were then thermally sintered at 120oC for one hour in a hot air oven before cooled down to ambient temperature and stored in a desiccated environment. Non-treated tablets were used as negative control. Crush resistance was evaluated by subjecting the tablets to two different electromechanical manipulation methods: ball-mill (5 min at 25 Hz; Retsch MM200), and high shear grinder (10 sec at 150 W; Science Ware MicroMill II). Additionally, at times 1, 2, and 3 months, heat treated tablets were tested for their ability to maintain their mechanical resistance to crushing during storage. Powders resulting from crush resistance tests were collected and characterized for their particle size distribution using sieve analysis. Resistance to drug extraction from crushed heat-treated tablets were examined using three aqueous solvents; water, normal saline and 40% ethanol. Dissolution tests from intact tablets were also performed at 0, 2, and 3 months intervals. Trials were carried out using a rotating paddle apparatus (50 rpm) with ultrapure water or 0.1N HCl as the dissolution media controlled at 37±2oC. Drug recovered from extraction attempts and release during dissolution were determined by UV absorption spectrophotometry (Shimadzu UV-1700). All studies were performed in triplicates.


Results: Heat-treated tablets exhibited high mechanical strength and resistance to crushing by different mechanical and grinding actions when compared to non-treated tablets (Figure 1). This resistance was maintained over an extended period of storage with most tablet powder fragments remaining greater than 850 microns (Figure 2). These tablet fragments would be difficult and undesirable for abuse by nasal insulation. Additionally, the electromechanical methods were shown to be highly reproducible with minimal variability, which has been noted with manual trituration methods. During extraction attempts from crushed tablets only 5.9%, 6.2% and 4.0% of drug was able to be recovered from water, normal saline, and 40% ethanol, respectively. Figure 3 (i) shows the dissolution of dextromethorphan in water was significantly reduced (< 30%) via the binding action with XCMC in the tablets as is intended to prevent ease of abuse by aqueous extraction. When in the lower pH environment of 0.1N HCl, such as after oral ingestion, the tablets maintained an extended release profile for 24 hours. There was no statistical difference noted between time points when compared to the 0-month reference.


Conclusion: Sintered tablets composed of a binary mixture of XCMC and Kollidon SR were able to maintain resistance to significant particle size reduction and largely inhibited drug extraction from large particles, as the drug was trapped in the matrix system of Kollidon®SR and XCMC. Abuse deterrent properties and normal drug release were maintained when stored for 3 months at room temperature. Solid oral dosage forms made from this polymer mixture may therefore be useful as a stable ADF tablet matrix. 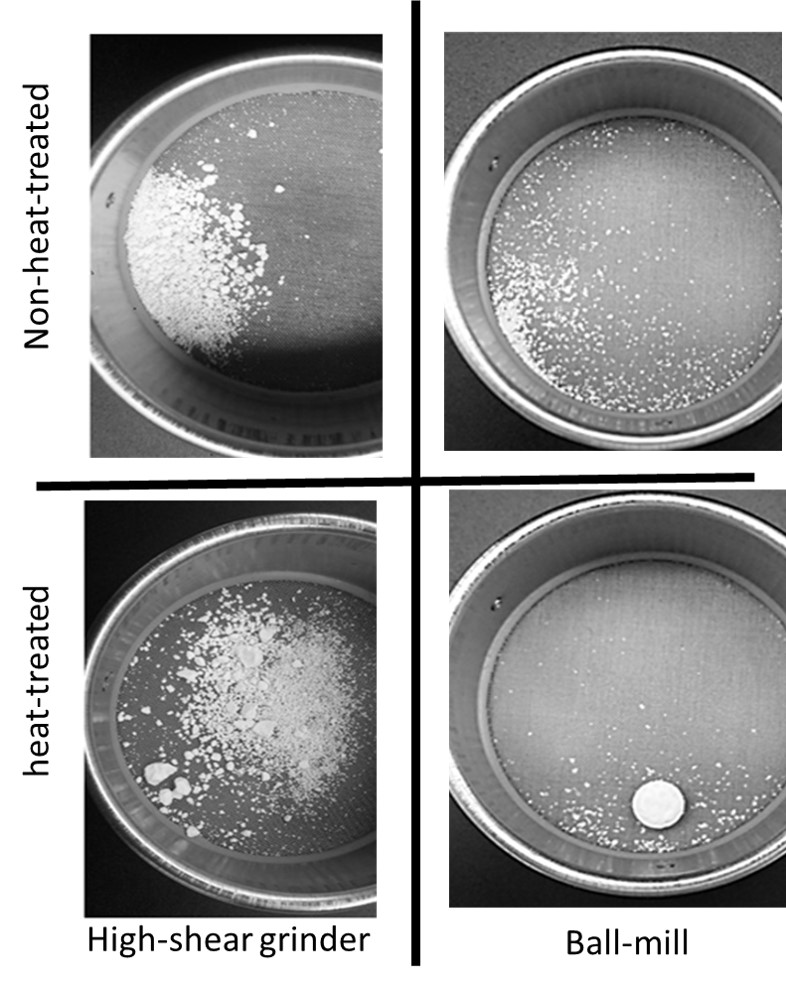 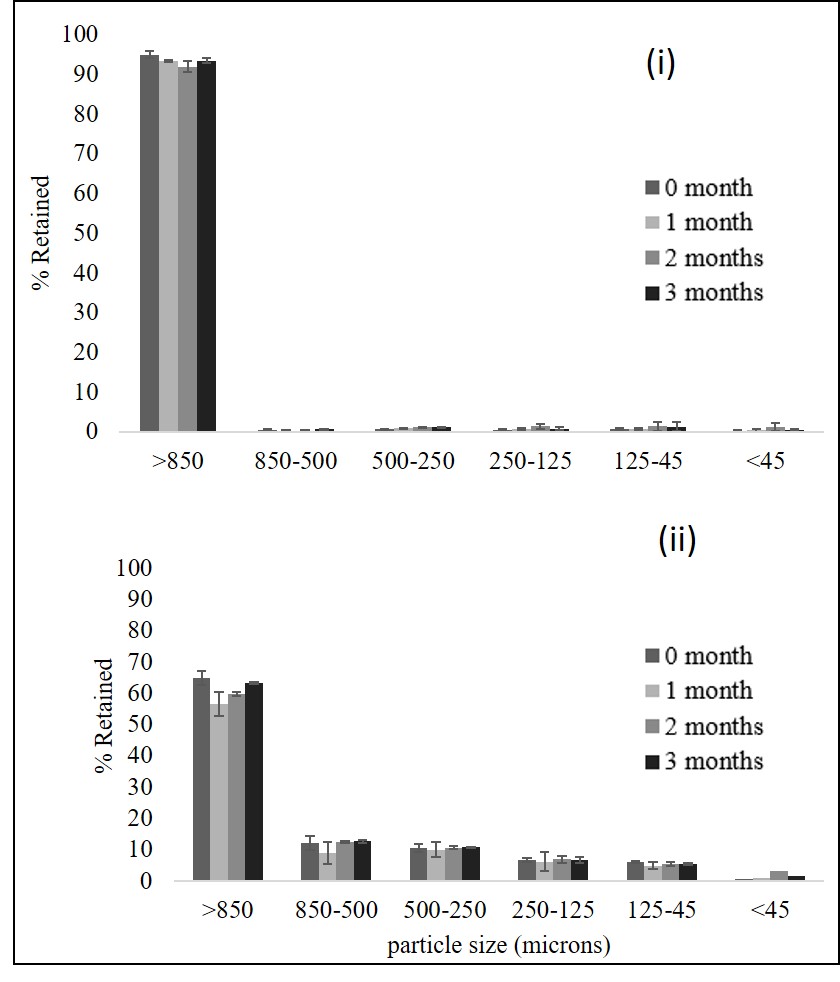 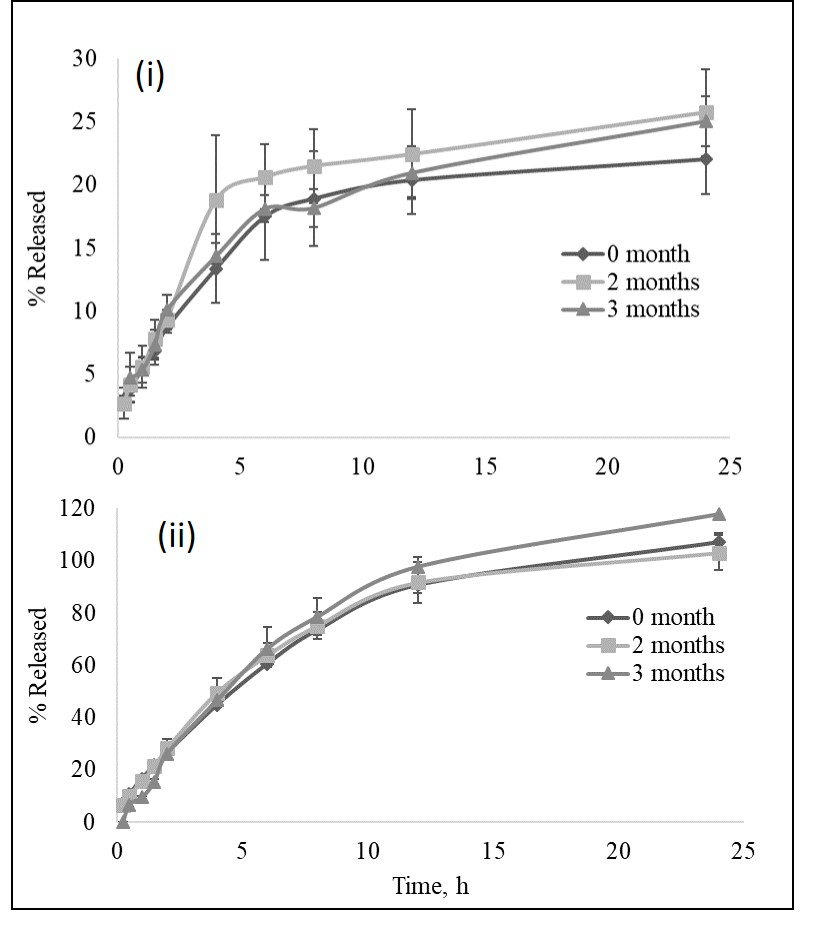