Purpose: Cyclodextrins are a group of ring oligosaccharides with a variable number of glucose units, they can bind with drug molecules to form a complex with enhanced solubility and permeation properties. However, the complexation process must be optimized as excess concentration of cyclodextrin may result in undesirable effects e.g. decreased permeation through the skin (1). The complexation between Hydroxypropyl ß cyclodextrin (HPßCD) and Naloxone (NX) was previously reported (2). In the current study, the feasibility of using ITC and molecular modelling as predictive tools for the molecular complexation between cyclodextrins and NX is investigated. These tools can save chemicals and time wasted during in-vitro screening process and provide more understanding for the process of complex formation.

Methods: ITC Experiments - ITC measurements were carried out at 298.15 K on the Microcal VP-ITC® microcalorimeter. Degassed NX solution was inserted into the injection needle of the device (290µl) and degassed HPßCD solution was inserted into the cell (1.4302 ml). Titrations parameters were set to 58 injections each of 5 µl over 6 S and the interval between injections was 200 S and the stirring rate was 310 rpm.

Molecular modelling - The 3D chemical structures of NX and HPßCD were obtained from www.chemspider.com then energy minimized using the MM2 force field of the docking program ArgusLab version 4.0.1 (3). In order to determine the affinity of HPßCD to form dimer or complex molecules, one molecule of HPßCD was used as a binding site and 2-hydroxypropyl glucopyranose (as if it is from another HPßCD molecule) or NX respectively was used as a ligand moiety.

As the net heat evolved in the first phase was not purely due to the exothermic interaction, we omitted the first phase before fitting of the curve to the one set of identical sites model of the Origin 5.0® software and developing the values of fitting parameters (N, K, ΔH, ΔS and ΔG) as shown in Table 1. The stoichiometry (N) of the binding of NX to HPßCD was 2:1, which may indicate that 2 molecules of NX bind to one molecule of HPßCD. The values of enthalpy ΔH were negative values indicating that the binding is exothermic. In addition, the values of Gibb ‘s free energy ΔG were also negative indicating that the binding interactions were spontaneous and favoured.

From the previous results, we can conclude that the binding of NX with HPßCD is more favourable than the binding between two molecules of HPßCD, the fact that supports our previously mentioned explanation of the ITC curve. Another simulation was done by the addition of another NX molecule to the previous HPßCD-NX complex. This simulation resulted in a position with a binding energy of – 4.08 kcal/mol and this also supports the result of the ITC that the stoichiometry of binding is 2NX: 1 HPßCD.


Conclusion: ITC and molecular modelling are not only efficient tools in predicting the cyclodextrins complex formation process, but also can explain each other and show us the molecular and thermodynamic basis of this process while saving the time and cost spent during the pursuit of knowledge. 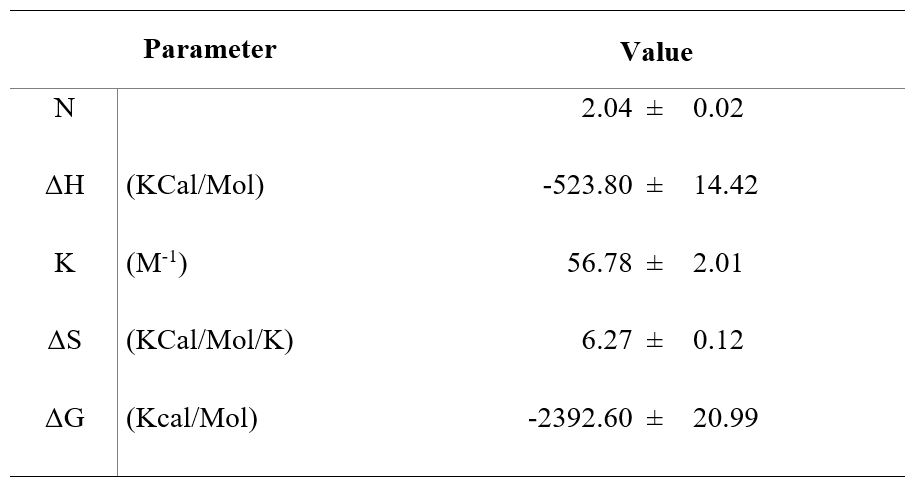 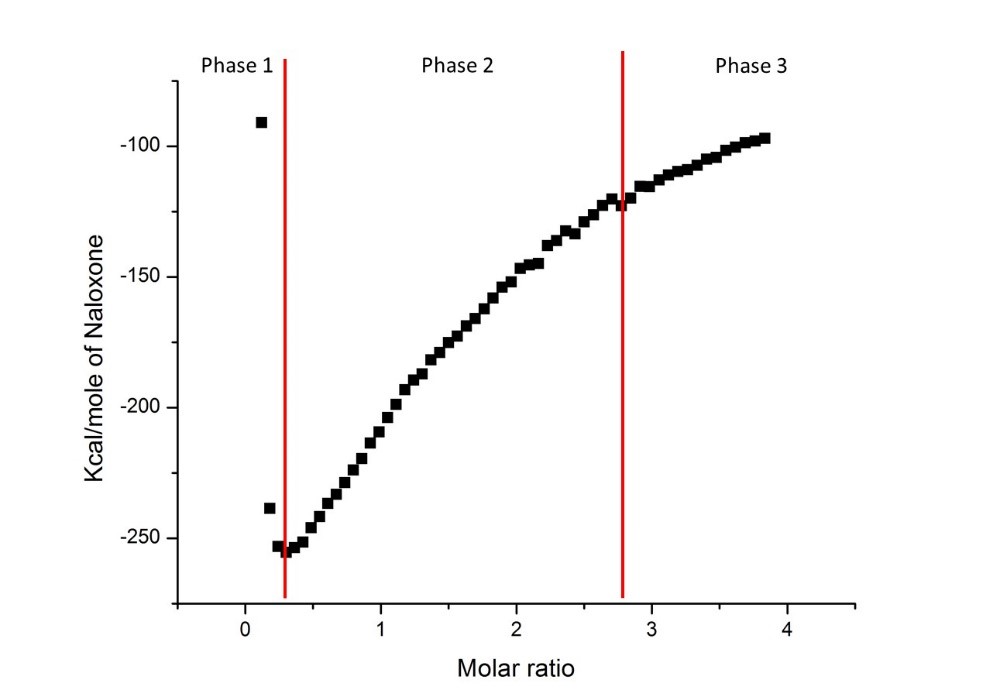