Purpose: A recently published study from 2017 reported use of high throughput drug discovery screening to decrease prostate cancer cell growth and found a synergistic effect with a combination of curcumin and ursolic acid. Unfortunately, both drugs are notorious for their poor bioavailability, which is in part a result of their poor water solubility. Our group has previously published on the use of an enhanced amorphous solid dispersion technique comprising a polymer carrier, drug, and a mixture of excipients that spontaneously emulsify to overcome the aqueous solubility limitations of the highly lipophilic and high melting point drug, atovaquone. We hypothesize based on our previous success that applying this formulation technique to ursolic acid and curcumin will result in an improvement in the dissolution behavior of both drugs, unachievable with a binary amorphous dispersion alone which could have a significant impact on prostate cancer treatment in the future.


Methods: Screening studies were employed to determine the optimal polymer carrier and spontaneous emulsifying component, a mixture of a high HLB surfactant, low HLB surfactant, and oil which spontaneously emulsifies upon dilution with water. Dynamic scanning calorimetry (DSC) was used to screen drug miscibility with polymer carriers. A sustained supersaturation study was additionally used to screen for the preferred polymer carrier in which dissolved drug in a water-miscible solvent was added to an aqueous buffer (pH 6.5) with pre-dissolved polymer. The solubility of each drug in various surfactants and oils was tested followed by production of ternary phase diagrams to determine the ratio of each excipient required. The rheological behavior of formulation blends was tested to determine the preferred hot melt extrusion parameters. Formulations containing drug, individually and in combination, were then hot melt extruded (HAAKE™ Minilab II) between 150 – 180 oC depending on the formulation at 150 RPM. Solid state characterization of the extrudates was performed by DSC and XRD. The dissolution behavior was tested phosphate buffer (pH 6.8) at 37.1 oC at 50 rpm using a modified USP apparatus 5 (paddle over disk).


Results: Screening studies with various polymers by DSC narrowed the preferred polymer carrier list to Affinisol AS 716 G, Kollidon VA64 and Soluplus for sustained supersaturation screening. Affinsiol AS 716 G was found to perform better than the other two polymers at sustaining supersaturation for both Curcumin and Ursolic Acid (C/Ceq 137.4 and 30.8 at 24 hours respectively). Screening studies for the spontaneously emulsifying component resulted in 2 separate combinations of excipients carried forward for study, one which was found to spontaneously emulsify at high aqueous dilutions (SEC 9) and one that only spontaneously emulsified with low aqueous dilutions (SEC 1). Rheology studies found no difference in the melt viscosity between SEC 1 or 9 but found a significant plasticization effect with samples loaded with curcumin. The opposite was observed with samples loaded with ursolic acid, increasing the melt viscosity with notable noise caused by friction of the solid ursolic acid particles that failed to dissolve loaded at 25% up to 180 oC.

Without SEC the extrudates loaded with 30 % curcumin or 10 % UA were translucent while only the curcumin loaded extrudates kept that property when a SEC was added. The combined approaches were neither without nor with SEC translucent. These observations were supported by DSC and XRD data, showing some crystallinity of both drugs in the combinations. Figure 1a depicts curcumin extrudates, which produced concentrations of 10 - 13 µg/mL, while the physical mixture with curcumin and the curcumin and ursolic co-loaded extrudate without SEC were much lower. Figure 1b shows the dissolution data for the ursolic acid loaded extrudates. Most of the extrudates do not show any measurable concentrations, similar to the physical mixture. Only the two extrudates loaded with only ursolic acid and an SEC showed measurable concentrations, as high as 11.4 µg/mL.


Conclusion: The presence of a spontaneously emulsifying component resulted in improved dissolution behavior of the solid dispersions containing curcumin and/or ursolic acid even in the cases where a complete absence of crystallinity was not achieved. Processing of each component separately produced more favorable formulation that the combination of the two drugs. Additionally, having a spontaneously emulsifying component resulted in an increase in crystallinity of the combination product, possibly a result of the decrease in polymer present to dissolve the drugs. Future studies will explore optimizing the polymer, SEC and drug ratios as well as exploring possible interactions between the two drugs during dissolution and processing. 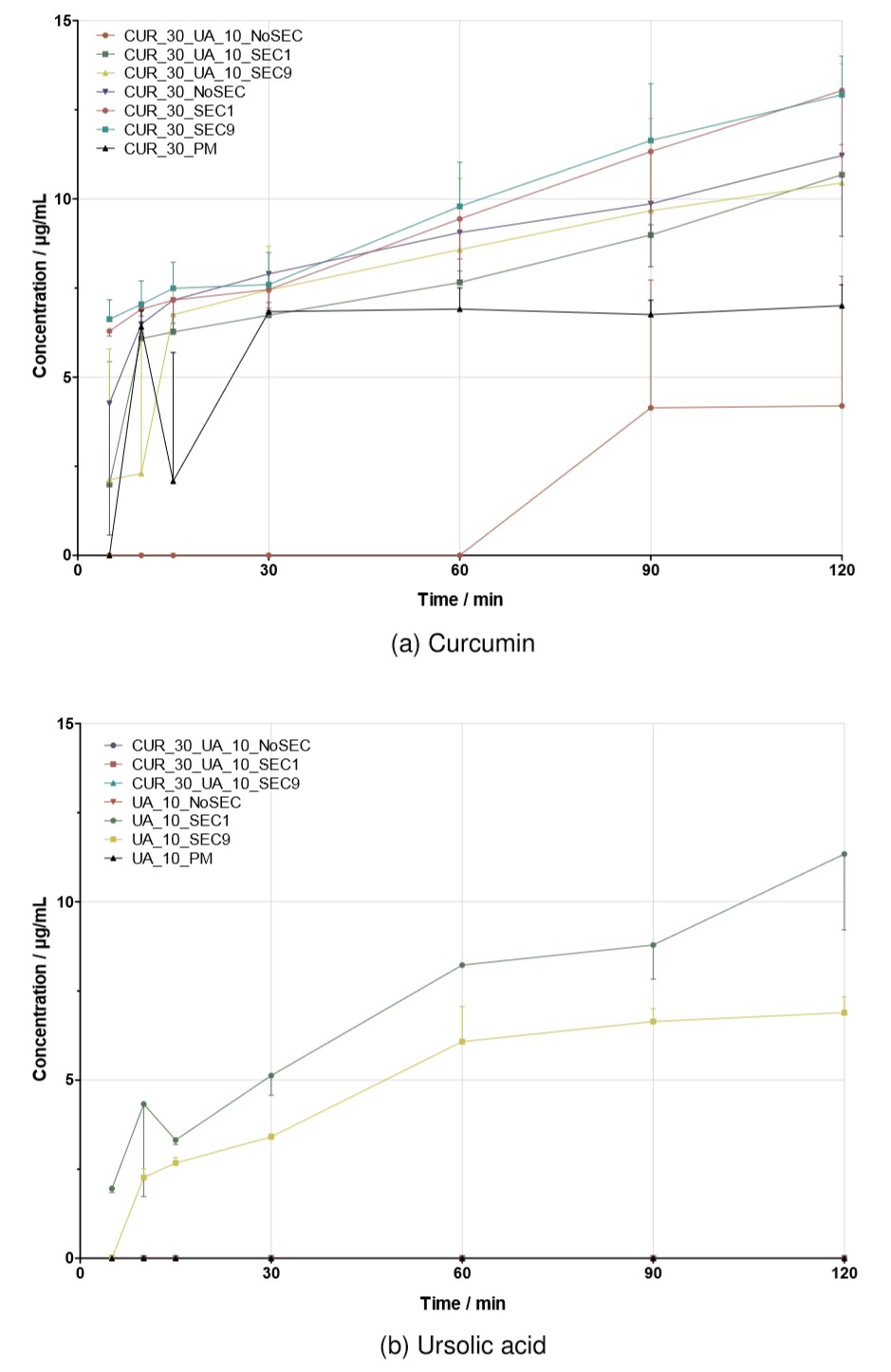