Purpose: Albumins are the most common type of globular proteins found in different species having immense physiological importance. From the research applications perspective, albumins can be used as a drug delivery carrier and stabilizer. Over the years, variations in surface properties and binding or adsorption interactions of albumins have remained a key investigating area for researchers. Moreover, external factors like moisture or temperature can greatly affect the structure, stability, folding and activity of albumin molecules making them susceptible to physicochemical transformations. These interactions are influenced by the protein structure and presence of surface functional groups as well as their arrangement along the protein molecule. Despite being important for protein functionality, humidity (RH) and temperature induced variations in proteins are still far from being fully understood. Surface energy, often described in terms of their non-polar or dispersive (γd) and polar or acid-base (γAB) components, could be employed as a potential descriptor for studying these effects and interactions. In this work, we have performed a comparative surface energy heterogeneity analysis of albumins obtained from different sources. Furthermore, the albumins were also examined for the RH and temperature induced variations in their surface properties, also described from additional thermodynamic characteristics like enthalpy (ΔH).


Methods: Albumins obtained from different sources, like chicken egg albumin (CEA), bovine serum albumin (BSA) and human serum albumin (HSA), were selected as model proteins for this study. Surface energy characterization was done using iGC Surface energy analyzer (iGC-SEA) equipped with humidity and temperature control modules. About 300 mg of albumin samples were packed into individual silanized glass columns (300 mm length and 4 mm I.D.). Finite dilution surface energy experiments (FD-IGC) were carried out at the 30˚ Celsius and 0% RH to determine the surface energy heterogeneity characteristics of the selected albumins. For RH and temperature studies, the IGC experiments were performed at the desired RH and temperature conditions using an infinite dilution approach. The columns were pre-conditioned for 1 h at the specified RH and temperature prior to the actual analysis.


Results: The preliminary results obtained from surface energy heterogeneity characterization using FD-IGC approach revealed a difference in the heterogeneity profiles of the studied albumins. All albumin types were found to possess energetically heterogeneous surfaces (Fig.1), with the γd varying from around 48.5 mJ/m2 to 45.5 mJ/m2 for CEA and HSA samples and from 46.2 mJ/m2 to 43.85 mJ/m2 for BSA. The results from RH studies indicated almost similar changes in the γd component for selected albumin types at the exposed RH conditions with a variation between 44-46 mJ/m2 at all the RH levels. On the other hand, a significant jump in the γAB at 10% RH was observed, from 3.2 mJ/m2 to 12.3 mJ/m2 for CEA and from 4.6 mJ/m2 to 14.9 mJ/m2 for BSA, as the RH increased from 0% to 10%. This was followed by a sudden decrease back to their initial levels for these albumins, as the RH was raised above 10%.


Conclusion: The surface energy characterization revealed a species-dependent variation in the surface properties of the selected albumins. The albumins from different sources were found to exhibit surface energy heterogeneity. In addition, our preliminary studies revealed the impact of RH and temperature conditions on surface energetics of these albumins were studied. These changes were particularly prominent in the γAB component implying that the polar functional groups of protein molecules could be more sensitive to the external variations and interactions. Thus, the surface energy characterization can be used as a potential tool to differentiate the surface nature of albumins from different species and also for tracking the onset of temperature or moisture induced physicochemical changes in these biomolecules. 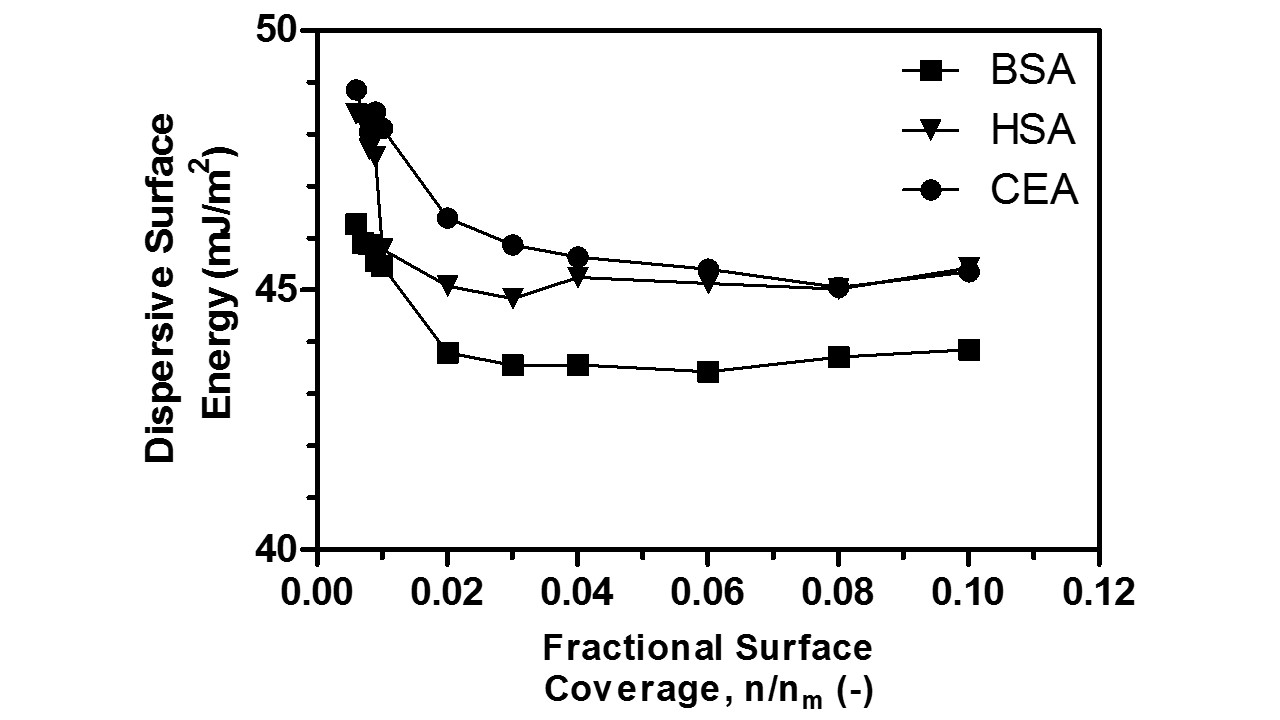