W1030-03-18 - Lipid Nanocapsules for the Encapsulation of Piperine

Purpose: The aim of this work is to investigate the best formulation of Lipid Nano Capsule (LNC) to encapsulate piperine in order to overcome its low bioavailability. This task was carried out in two parts. In the first part of this study, LNC was prepared with three different oils and the stability of LNC was investigated. The best oils were selected to be candidates to encapsulate piperine. Further studies including zeta potential, size measurements, and drug release were performed for piperine encapsulated within LNC. In the second part of this work, different nonionic surfactants were used to prepare LNC. The best surfactants were selected to be candidates to use in LNC formulation loaded with piperine. Further studies including zeta potential, size measurement, and drug release were carried out for piperine encapsulated with LNC.


Methods: Based on the phase inversion process which is stated and patented by Heurtault and his co-workers [1], LNC particles were obtained. This task was performed by utilizing a number of oils such as Labrafac, soybean, and ethyl oleate oils. By fixing the oil component at 21%, different formulations of LNC with different proportions of components were prepared using Labrafac as oil and one of three different surfactants including Tween 80, Tween 20, and Solutol HS to determine the best surfactant for LNC formulation to encapsulate piperine. Different amounts of piperine were dissolving in labrafic and ethyl oleate oils to investigate the effect of piperine loading on the size of particles. The size of LNCs were characterized by dynamic light scattering (DLS) using a Malvern Nanosizer ZS (Malvern,United Kingdom). The instrument operated at the temperature of 25oC or 37oC and the scatter angle of 173o. The measurement was performed in triplicate. The zeta potential was analyzed by Electrophoretic Light Scattering (ELS) using Malvern Zeta sizer ZS. This assay was carried out at the temperature of 25oC and 37oC for nanoparticles. The study of piperine release from the particles was performed in physiological conditions. Briefly, 1 ml of piperine encapsulated in LNC was placed into three dialysis tubes. Each tube was placed in separate beakers containing 2% albumin in phosphate buffered saline PBS (pH 7.4) at 37oC and was stirred for 24 hours in 200 rounds per minute. The amount of piperine was determined by measuring the UV absorption of samples after 1, 2, 3, 6, and 24 hours.


Results: LNCs with a diameter of 50 nm were obtained when ethyl oleate and labrafac oils were used for the formulation [2]. From the timeline shown on the x-axis in Figure 1, it is clear that the size of these two formulations remained stable during the period. However, surprisingly, LNCs were not obtained in the normal size range (20-100nm) when soybean oil was used as the oil component of the formulation and a fluctuated and unstable size range during the period can be seen.From the data presented in Figure 2 it can be seen that where 17% Solutol SH 15 was used in LNC formulation, an excellent LNC was found with ca 50nm diameter which remains stable during the period shown below.

The last task of this work was performed to investigate piperine release from nanoparticles and appreciate the impact of oil on piperine release. The absorption of samples were measured after 1, 2, 3, 6, and 24 hours (Figure 3) and the concentrations were calculated. It can be seen that there was no piperine release after one hour from nanoparticles when Tween 80 was used in their formulation. The reason is unclear, however it can be justified that in this formulation a high amount of Tween 80 was used as a proportion of LNC thus resulting in an increase in the shell of the nanoparticle and prevention of the release

of the drug from the LNC core. As reported in literature, surfactants not only influence drug release from LNCs, but also have a role in toxicity, in which when surfactant proportion is increased, toxicity increases.


Conclusion: Lipid nanocapsules were selected in order to incorporate piperine and overcome its low bioavailability issue. The reason behind selecting LNCs among other nanocarriers is that it has an excellent profile in comparison and all its components are non-toxic and approved by the FDA.

Therefore, the best oil and surfactant for LNC preparation were determined for the encapsulation of piperine. For future work, by having the best formulation of LNC to incorporate piperine in hand, this formulation can be used to encompass anticancer drugs which are affected through resistance by cancer cells. 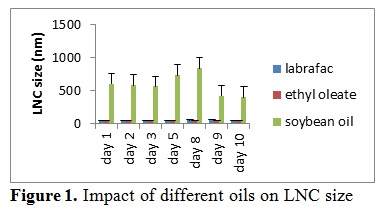 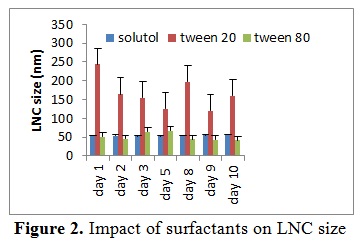 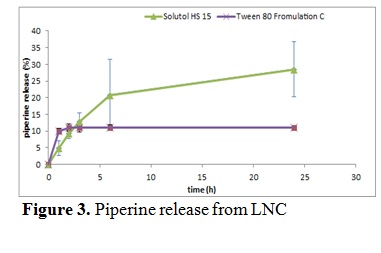