Purpose: In 2001 the FDA approved the NuvaRing® as the first combined contraceptive intravaginal ring (IVR). During the first days after application of NuvaRing® an in vivo burst release of EE can be observed. This burst release can lead to a variety of undesired side effects. With the in vitro dissolution methods available to date (shake flask method), the burst release observed in vivo cannot be properly described. In 2018 several generic contraceptive IVRs were released to the market. Recently, results of a pharmacokinetic bioequivalence study comparing plasma levels after administration of Ornibel®, a generic IVR and NuvaRing® over a duration of 35 days were published. The authors only presented mean plasma profiles, but these clearly indicate that , whereas long-time plasma levels obtained from the two IVRs are similar, the extent of the burst release is different. The purpose of the present study was to establish an in vitro dissolution method that is predictive for both the overall plasma profile obtained after administration of a contraceptive IVR and the burst release that is often observed within the first hours of administration.


Methods: Two different IVRs, i.e. the NuvaRing® and the Cyclelle® (= Ornibel®) IVR were used for the in vitro experiments. Both IVRs are intended to release 120 µg ENG and 15 µg EE per day over a time range of 21 days. A novel in vitro model addressing drug release into the vaginal lumen, permeation through the vaginal tissue and absorption into the systemic circulation was developed. The model consists of a 3D-printed dissolution cell, which is divided into three compartments: an inner compartment simulating the vaginal lumen that contains the IVR, a gel layer as a diffusion barrier, i.e. the simulated vaginal tissue and, an outer compartment simulating the blood circulation (see figure 1). The composition of the diffusion barrier was established in a series of screening experiments that focused on determining a gel that is stable throughout the entire experiment and enables passive diffusion of EE and ENG. A hydrogel containing 2 % agarose turned out to be the most promising material for this purpose and was applied as diffusion barrier. Vaginal Fluid Simulant containing glucose (VFS+G) and 0.5 % sodium dodecyl sulphate (SDS) was used to simulate the fluid composition in the vaginal lumen. The outer compartment (acceptor compartment) was represented by phosphate buffered saline pH 7.40 with 0.5 % SDS added. SDS was added to both the intraluminal- and the acceptor fluid to maintain sink conditions. Each individual IVR was placed into the inner compartment of a cell. Then, intraluminal fluid and acceptor fluid were added to inner and outer compartment, respectively, the cell was closed and placed into an incubator shaker (IKA 3000 KS control) and agitated at 65 rpm and 37.0 °C. At pre-determined time points, samples were removed and the media in inner and outer compartment were completely replaced by fresh media. After equilibrium, the amount of EE and ENG in the diffusion barrier was regarded as constant and only assessed at the end of the test duration, i.e. after 21 days using a validated extraction method. Samples were analyzed by HPLC. Daily and cumulative drug release of both IVRs were calculated. In the final step, cumulative drug release was corrected by the drug concentrations determined in the diffusion barrier. The in vivo plasma concentrations of EE and ENG from NuvaRing® and Cyclelle® were digitalized from the in vivo plasma profiles reported by Algorta et al. using WebPlotDigitizer. The fraction absorbed in vivo was calculated by the Wagner-Nelson method and plotted versus the fraction released calculated from the cumulative in vitro release profiles at corresponding sampling time points.


Results: Figure 2 shows daily EE and ENG in vitro release from the NuvaRing®. Within the first hours an increased drug release (burst) could be determined. The cumulative in vitro release profiles (not shown) indicate that after the initial burst both EE and ENG release follows zero-order kinetics. Fitting cumulative in vitro EE release of NuvaRing® with the corresponding in vivo plasma data resulted in a linear relationship (R² = 0.9961) (figure 3). Similar results were obtained for the Cyclelle® IVR when in vitro and in vivo data were processed in the same way (data not shown, R² = 0.9796). This indicates that the in vitro model enabled a good prediction of in vivo drug release for both IVRs.


Conclusion: A novel predictive dissolution method for predictive drug release testing of IVRs was developed. The method allows to better address the in vivo burst release that can be observed for several IVR types shortly after application of the IVR. The method will be validated and fine-tuned in future experiments with a larger number of contraceptive IVRs for which in vivo data are available. 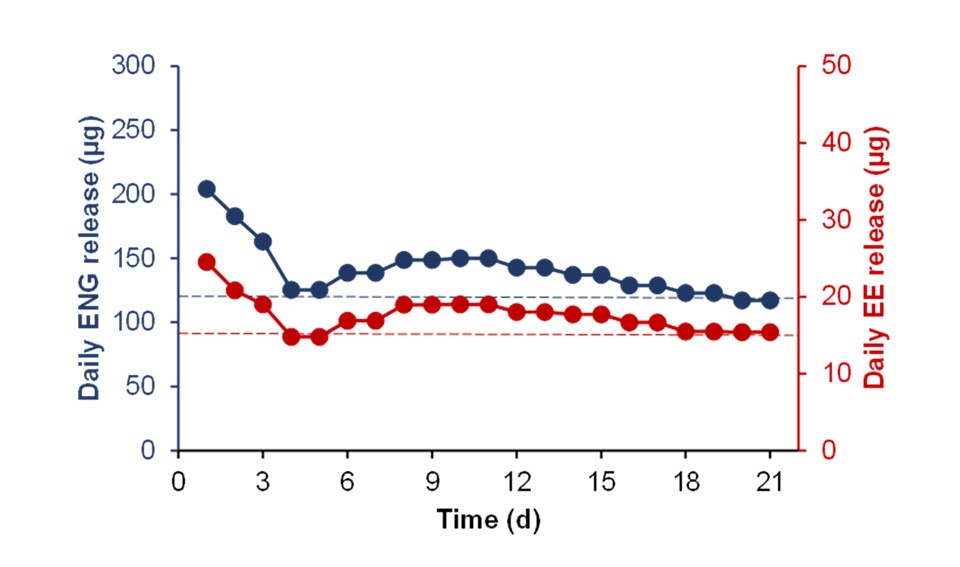 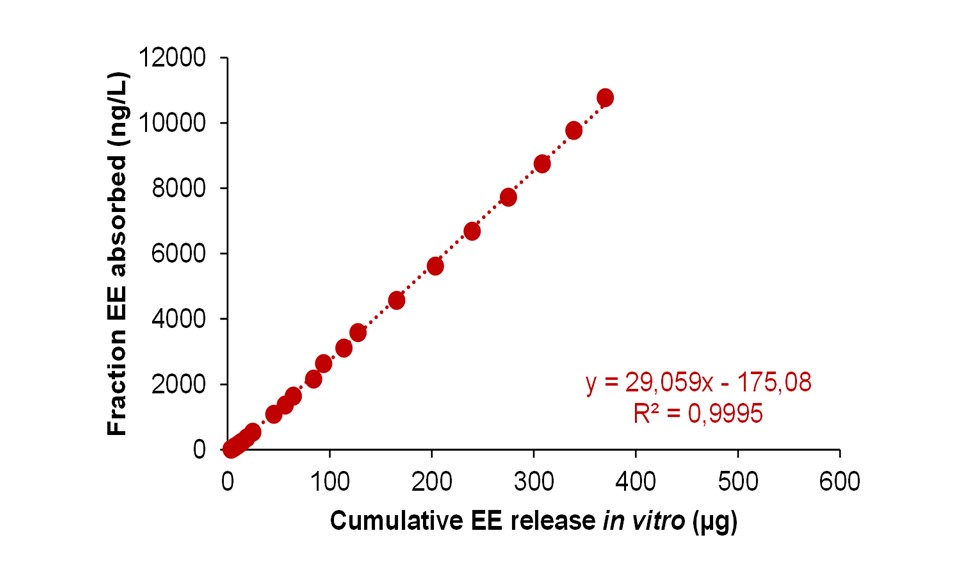