Purpose: A stimulant laxative drug, bisacodyl, is prescribed to treat chronic constipation and neurogenic bowel dysfunction. However, bisacodyl has low water solubility and it leads to limited drug release in colon, resulting poor pharmacological effect. In addition, bisacodyl causes irritation to intestinal mucosa. Especially, if the drug is released from the upper intestine and systemically absorbed, it can cause several side effects, including abdominal pain, nausea and vomiting. To acquire sufficient pharmacological effect and minimize side effects, drug solubilization techniques and colon-targeted delayed-release system should be applied to the drug simultaneously. In this study, we prepared enteric-coated tablet which can improve delayed-release pattern and dissolution of bisacodyl compared to the commercial product, Dulcolax®.


Methods: Before preparing drug-loaded tablet, excipients were monitored to optimize drug dissolution property. Solubilizers and adsorbent were evaluated and selected based on their solubilizing effect. In addition, the compatibility between the bisacodyl and the solubilizers was also monitored by comparing drug stability of drug-solubilizer mixtures at high temperature condition. With the selected excipients, tablet was manufactured by wet granulation method. During the process, solvent and binder was also evaluated to further enhance physical properties and release pattern of the tablet. Excipient powder mixture was mixed with binder solution using high shear mixer. After the mixing step, drying process using fluidized bed dryer was followed by milling process using oscillating granulator. The granule was pressed into tablets and coated with Eudragit L/Eudragit S-based solution. Finally, the release pattern of the optimized enteric-coated tablet was compared with that of commercial product.


Results: Among the solubilizers, The drug solubility in Poloxamer 407 (28.7 μg/mL at 0.2% w/v solution), Tween 20 (26.6 μg/mL), and Vitamin E TPGS (30 μg/mL) was obviously higher than that in other solubilizers and solubilizer-free condition (3.0 μg/mL in distilled water). Especially, Poloxamer 407 exhibited the fastest bisacodyl dissolution and the lowest drug degradation compared to the others. And in adsorbent monitoring test, Aerosil 200-used granule showed better drug dissolution compared to other groups (Neusilin US2 and Neusilin UFL2-used granules). Based on these data, Poloxamer 407 and Aerosil 200 were selected to prepare bisacodyl-loaded tablet. When ethanol-water mixture was used as a binder solvent in granulation process, bisacodyl was blended with powder vehicle. However, when acetone was used, bisacodyl could be applied as a dissolved form since the drug is soluble in the solvent. Moreover, in drug release test at stimulated colonic fluid (pH 6.7), drug-dissolved acetone group showed 2-fold higher dissolution than ethanol-water mixture group. In addition, when Kollidon VA 64 was used as a binder instead of HPC-EF, drug release rate was further increased, resulting significantly enhanced dissolution compared to Dulcolax®. In the dissolution test using continuous dissolution media, the drug release from optimized formulation was effectively restrained below 5% at pH 6.5 (stimulated upper intestinal fluid), rapidly elevated at pH 7.2, and dissolved over 40% at pH 6.7(stimulated colonic fluid). Compared to Dulcolax®, the formulation showed further delayed release. This indicates that it can prevent rapid drug release in upper intestine and GI irritation with providing better therapeutic outcomes.


Conclusion: Through the stepwise optimization of the formulation, enteric-coated laxative system with improved drug release properties was successfully prepared. Based on this research, we suggest that the formulation could be a promising alternative to enhance pharmacological effect and minimize side effects of existing bisacodyl products. 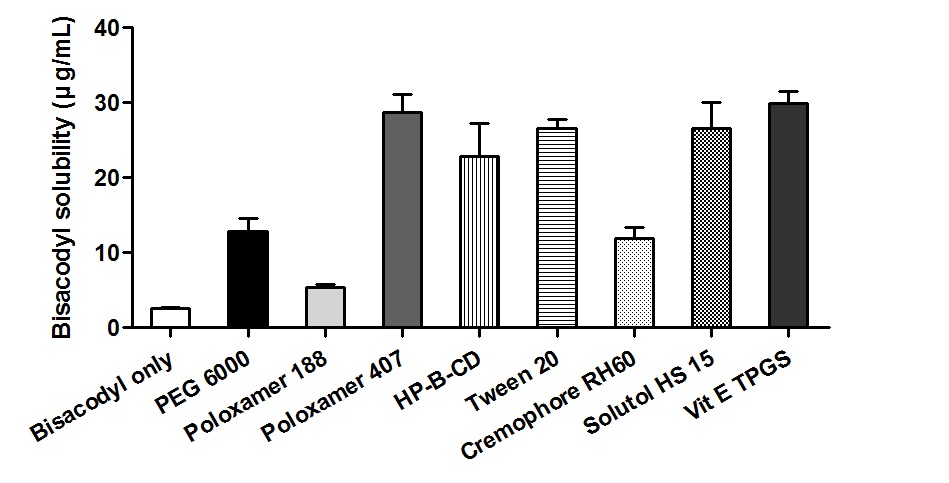 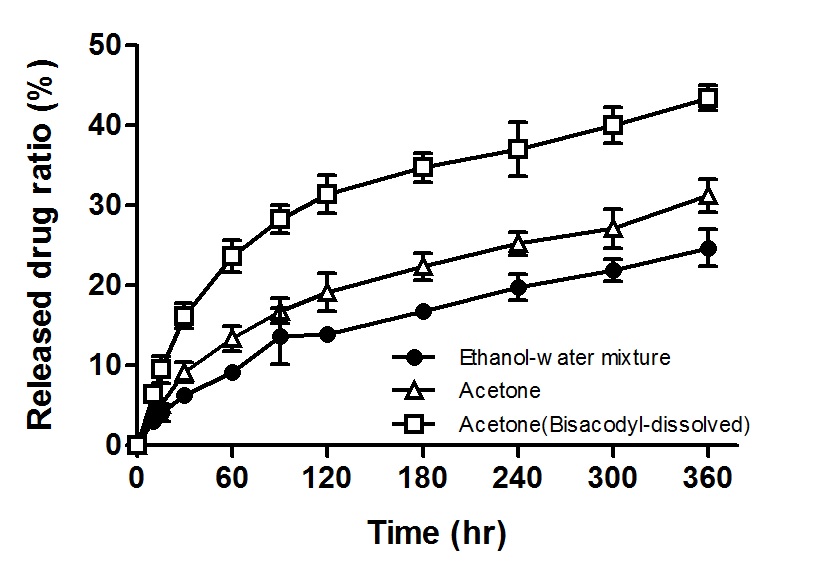 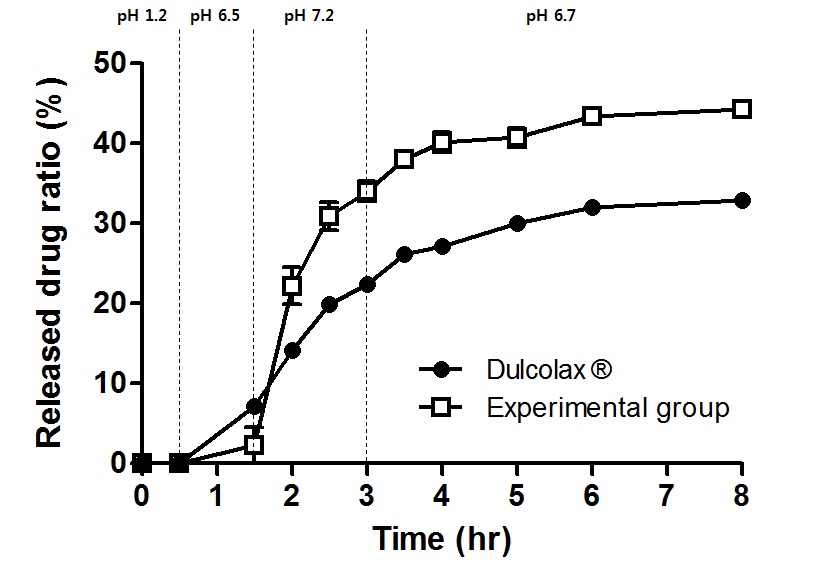