Purpose: Enoxaparin sodium (Lovenox) is a low molecular weight heparin. It is used to treat the patients undergoing orthopedic or general surgery for prevention of deep venous thrombosis and pulmonary embolism. Enoxaparin sodium is often diluted for accurate delivery of doses to neonatal, infant and pediatric patients.Therefore, enoxaparin sodium is used for compounding in hospital pharmacies. The purpose of this study is to develop a simple, rapid, sensitive method for determining the stability of enoxaparin sodium in a compounded injection (20mg/mL)present in apre-filled syringe.The analysis is carried out for 4 weeks to test the stability of drug in compounded pre-filled syringes to be administered to patients.


Methods: Instrumentation included a waters HPLC (e2695 separation module) equipped with a photo diode array detector and waters spherisorb 80Å SAX (Strong anion exchange) Chromatographic column (250mm length x 4.6mm ID). The chromatographic separation was achieved using an isocratic solvent system comprising 50% 5mM Potassium phosphate monobasic (adjusted to pH3) and 50% 5M sodium perchlorate monohydrate (prepared in-situ using 5mM Potassium phosphate monobasic) (adjusted to pH3). The flow rate was maintained at 0.6 mL/min keeping an injection volume of 10 µL for 55 minutes. The column temperature was set at 30oC and detected at 232nm. Using Empower 3 software the output signal was monitored and processed. Initial determination of linearity was carried out with four working concentrations (1mg/mL, 5mg/mL, 10mg/mL, 20mg/mL)of enoxaparin sodium prepared from the stock solution, the USP standard for enoxaparin sodium was used for preparing initial stock. Compounded enoxaparin sodium (20mg/mL) in pre-filled syringeswere collected from hospital pharmacy and stored at room temperature(25oC)and at refrigerated conditions (4oC). Samples from compounded injections were analyzed for drug content using HPLC on day0 and day 7. Samples stored at room temperature and refrigerator will be analyzed for percent of enoxaparin sodium at day 14 and day 21 and day 28.Sterility testing is done by utilizing full contents of pre-filled injections by selecting at least 10% of containers.For testing the sterility of compounded prefilled syringes, a 3% w/v of soy-bean casein digest medium was prepared as per USP chapter < 71 >. Later, 1 mL of compounded preparation is added to 9mL of 3% w/v of soy-bean casein digest medium and subjected to incubation for 14 days. The culture tubes were visually inspected during the incubation period.


Results: Initial attempts of separation were performed by gradient elution method, yet it was found to be a complex method and it was observed difficult to elute even after a long period time. The Enoxaparin Sodium peak was identified and the retention time(RT) was found to be 16±0.5 minutes as shown in Fig. 1. The r-squared value for HPLC linearity was found to be 0.999 as shown in Fig. 2 with %RSD of 0.61. The percent of enoxaparin sodiumpresent on day 0 is 101%w/v.Whereas,96% w/v and 96.5%w/v of enoxaparin was obtained on day 7 for the samples stored at room temperature and refrigerator temperature respectively.


Conclusion: Therefore, a simple reproducible isocratic method was developed for detection of enoxaparin sodium.The results of this study indicated that based on the linearity andstability indicating assay of enoxaparin sodium can be performed using the developed isocratic HPLC methodequipped with SAX column.This developed method is suitable for analyzing the drug content in pre-filled syringes. Drug content on day 7 indicated >90% of drug was retained in compounded pre-filled syringes (20 mg/mL). Futurestudies include testing the sterility of compounded pre-filled injections as per USP chapter < 71 >. 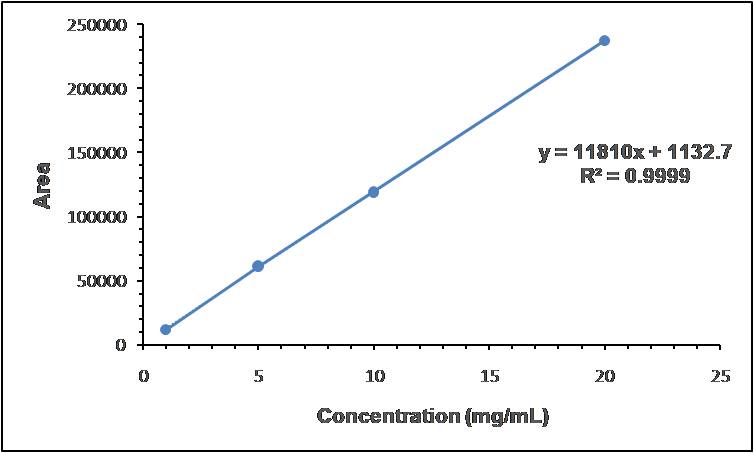