Purpose: Exosomes are nanovesicles of endocytic origin that are abundantly found in biological fluids and play a crucial role in intercellular communication. These endogenous biomolecule nanocarriers have excellent biocompatibility and are also able to migrate across biological barriers. Exosomes are inherently bioactive with demonstrated implications in the etiology of metabolic diseases and cancer. Thus, these nanovesicles are a valuable nanotool for disease prognosis and treatment. Moreover, their innate characteristics provide them with superior properties over other nanomaterials for drug delivery. The prime focus of our research is to develop exosome-based tools for theranostic applications. To facilitate creation of such systems the first step is to isolate, characterize, study and modify exosomes.


Methods: A sequential differential centrifugation protocol was used to isolate exosomes from raw bovine milk and human serum. Once the exosomes were isolated, they were characterized according to the parameters set by International Society for Extracellular vesicles. The exosomes were characterized for size, size distribution, zeta potential and shape via Dynamic Light Scattering and Transmission Electron Microscopy. The yield was quantified by the BCA protein assay. Exosomal markers were identified via Immunoblotting.

To assess stability of exosomes, they were subjected to different treatments such freeze thaw cycles, physical incubation (at 37°C and 25°C), probe sonication and electroporation. Further they were modified by loading with lipophilic and hydrophilic dyes, DiD oil and Alexa Fluor 647 via physical incubation. Free dye was separated from the dye loaded exosomes using centrifugal filters and solid phase extraction. To understand the dye release behavior the dye loaded exosomes were then subjected to an in-vitro dye release study.


Results: The sequential differential centrifugation method was optimized and was able to isolate a monodisperse population of particles with an average size of 98.17±17.6 nm and a zeta potential of -10.06±2.78 mV (n=10). Nano-vesicular nature and spherical shape was confirmed by Transmission Electron Microscopy. The isolation procedure was able to provide a minimal yield of 100 mg/liter of milk. Further, exosomal markers (CD9, TSG101, CD81) were identified across different batches via immunoblotting. Apart from milk an alternate source of exosomes was also evaluated. Exosomes were isolated from Human serum using the same protocol and were characterized in a similar manner. Exosomal yield from human serum was found to be 1/4th to that of bovine milk.

For loading exosomes with the dyes, different methods were compared and evaluated. None of the treatments were found to have an effect on the size, size distribution, zeta potential and protein content of the exosome dispersion. Physical incubation is the least invasive method and was able to load the exosomes with dye amounts comparable to the other methods. Lipophilic DiD loading was optimized to up to 45ug/mg of exosomes with >80% entrapment efficiency. For encapsulating hydrophilic materials, they need to penetrate the outer lipophilic bilayer and enter the central aqueous core. Hydrophilic Alexa 647 loading was hence found to be low in comparison to DiD, but concentration dependent (up to 5ug/mg) with low entrapment efficiency (less than 5-30%). In-vitro dye release studies for Alexa 647 loaded exosomes showed mixed order release kinetics, an initial zero order time independent release for the first 10 hours followed by a first order release. However, DiD loaded exosomes released less than 1% of the loaded dye in 24 hours.


Conclusion: The sequential differential centrifugation method is a reliable method to isolate exosomes in a reproducible manner. In terms of yield and cost, isolating exosomes from raw bovine milk is more economical that using human serum. Further, it is essential to evaluate the stability of exosomes for their suitability towards future theranostic application. The exosomes were tested and found to be quite stable to the simple treatment/modifications. For future studies, we intend to encapsulate the fluorescently labelled exosomes with fluorescent short ssDNA molecules. This will enable us to analyze the uptake and colocalization of exosomes with their cargo within mammalian and bacterial cells. The same system would be used to study and compare the in-vivo pharmacokinetic behavior of exosomes in healthy and tumor induced animal models. These experiments will help us in generating data describing cellular interaction of exosomes as well as their tumor homing capacity and will contribute to our long-term goal of developing exosome-based systems for cancer theranostics. 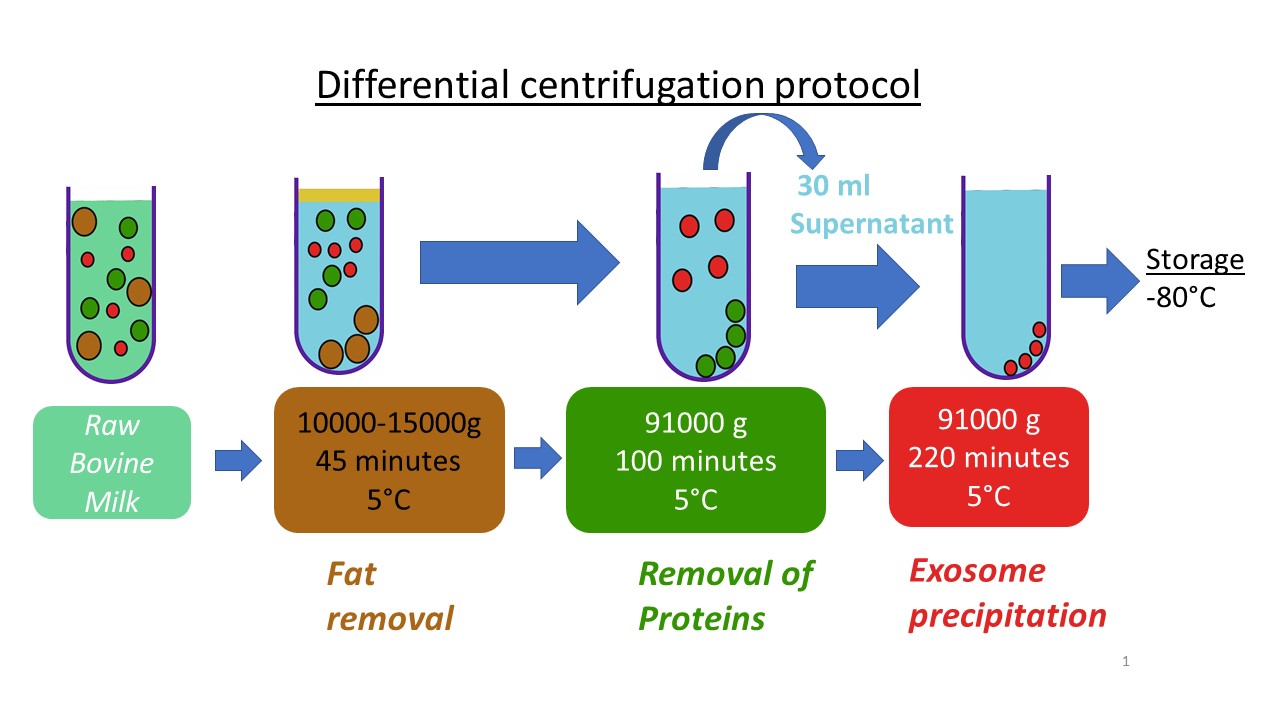 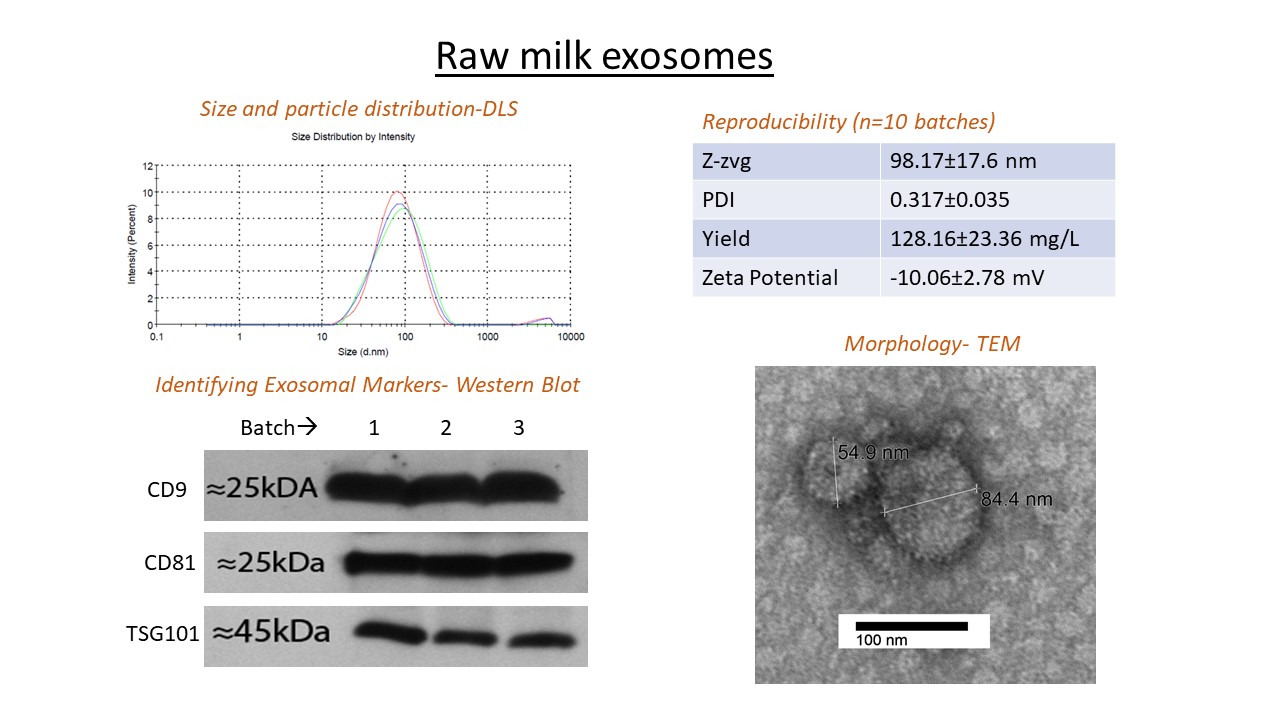 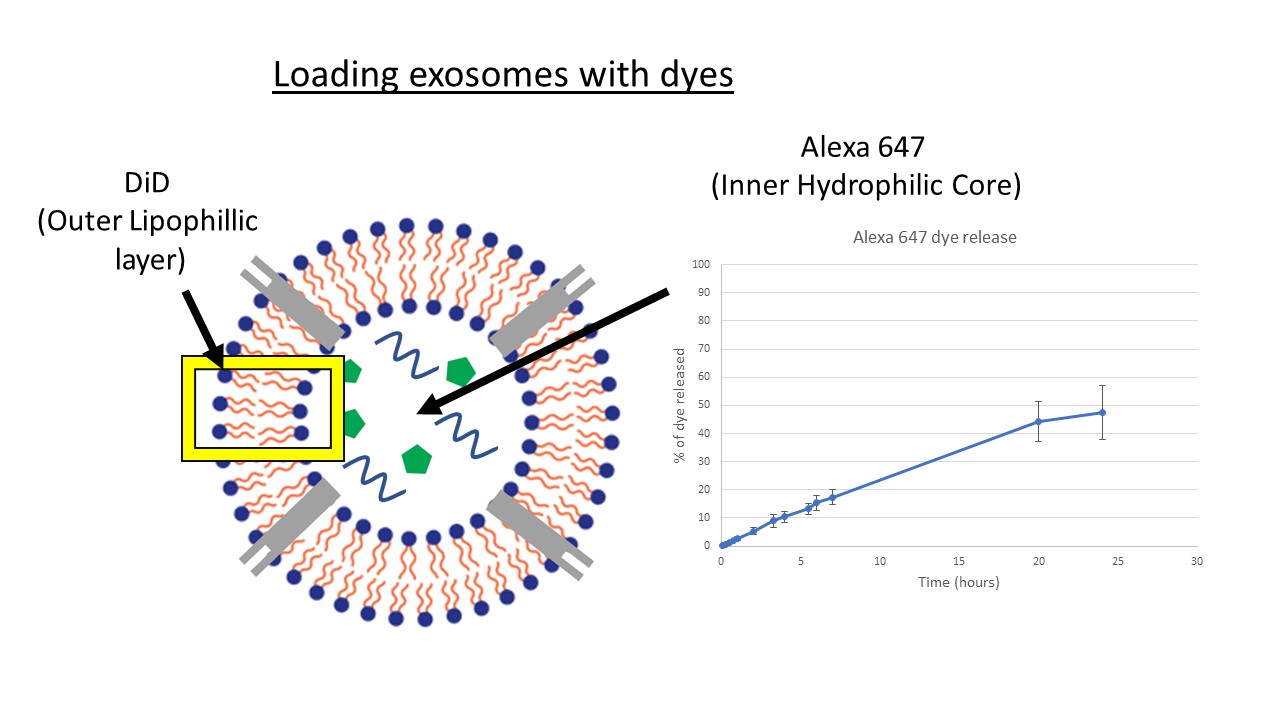