Purpose: An unknown degradation product was determined by accurate mass analysis to be of identical mass to the parent compound with a unique retention time by liquid chromatography. Due to the small size of the molecule, and the extremely limited MS degradable functionality present, MS/MS fragmentation data was of minimal use as an analytical method. As a result, sample-limited multidimensional solution NMR spectroscopy was conducted to elucidate the structure of the degradant. This poster presentation will provide a detailed account of the methodical approach utilized for the structure elucidation of microgram quantity of the degradant using high-field (700 MHz) solution NMR spectroscopy coupled with 1.7 mm MicroCryoProbe technology. We will show that the structure of the degradant is the result of an unexpected novel rearrangement process. We will also present qNMR results obtained for the degradant which allowed for the accurate determination of the UV relative response factor (RRF). Ultimately, this gave the relative concentration of the degradant present in the aged samples without a standalone synthesis of the degradant.


Methods: The parent compound of interest (A) is a crystalline free base. In the FMF lead formulation (a mini-tablet formulation), the degradant was observed under accelerated stability conditions (0.2% after 4 wk 60C/35% RH open dish). The degradant was also observed in other FMF-like mini-tablets, particularly in a formulation where stearic acid was used in place of magnesium stearate in which case a small amount of the peak was formed after 4 weeks at 60C/35% RH open dish. In solution, the degradant forms in the presence of di-acids, but not in simple acids like dilute HCl. LC-MS studies show the degradant has the same accurate mass as the parent, indicating similar elemental composition. However, differences in the fragmentation patterns were observed in both positive and negative ion mode and definitive structure from LC-MS was not possible. The degradant was then isolated and submitted for NMR analysis. The sample was analyzed using a Bruker Avance III HD 700 MHz NMR spectrometer equipped with a 1.7 mm HCN TCI MicroCryoProbe (~75 micrograms in 35 microliters of DMSO-d6).


Results: Analysis of the 1H NMR spectra of the degradant clearly showed similarities with the parent but with some key structural differences. A variety of 2D NMR experiments were employed to deduce the definitive structure of the degradant. Results from the long-range 1H-13C gHMBC experiment revealed a dramatic change for the carbonyl-like carbon and moderate changes for the methine carbons. The IDR-gHSQC-TOCSY experiment was run with varying mixing times to elucidate nearest neighbors. Combining all this information allowed us to piece together the structure of the degradant. For quantitative analysis, approximately 400 micrograms of the degradant was isolated through HPLC fraction collection from parent granules and minitablets that had been enriched in the degradant by thermal stress (60C/35%RH open dish). Samples containing parent and the degradant in approximately 1:1 (w/w) ratios were prepared in DMSO-d6 at target concentrations of approximately 4 mg/mL, 2 mg/mL, and 1 mg/mL, and analyzed by NMR and HPLC. The determination (qNMR) of the molar ratio between parent (A) and the degradant (B) was accomplished using a 90 pulse width, a 60 second recycle delay, and 16 transients. The raw data was processed using exponential multiplication and Fourier transformed to afford the 1D 1H NMR spectra used for quantitation. The experiments were run in duplicate for all three concentrations. Molar ratios between parent and the degradant (mparent/mdegradant) were calculated using the methyl resonances of the ethyl groups for both the degradant and the parent. Integration of the two resonances (1.12-1.07 and 1.05-1.02 ppm, respectively) was done in duplicate for all three concentrations and the average molar ratios were calculated. The HPLC peak areas at 236 nm were also measured in duplicate and averaged to calculate A236nmdegradant/A236nmparent ratios. The RRF was then calculated and averaged over the three concentrations. 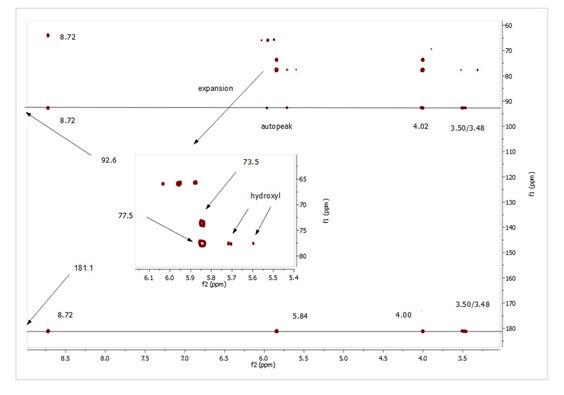 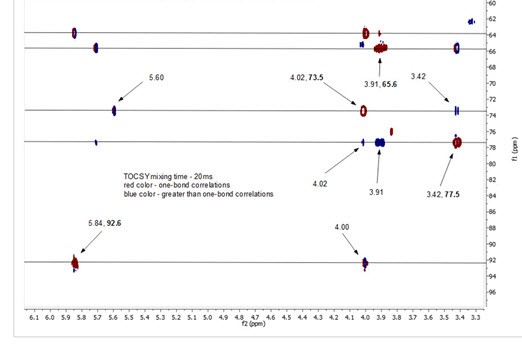 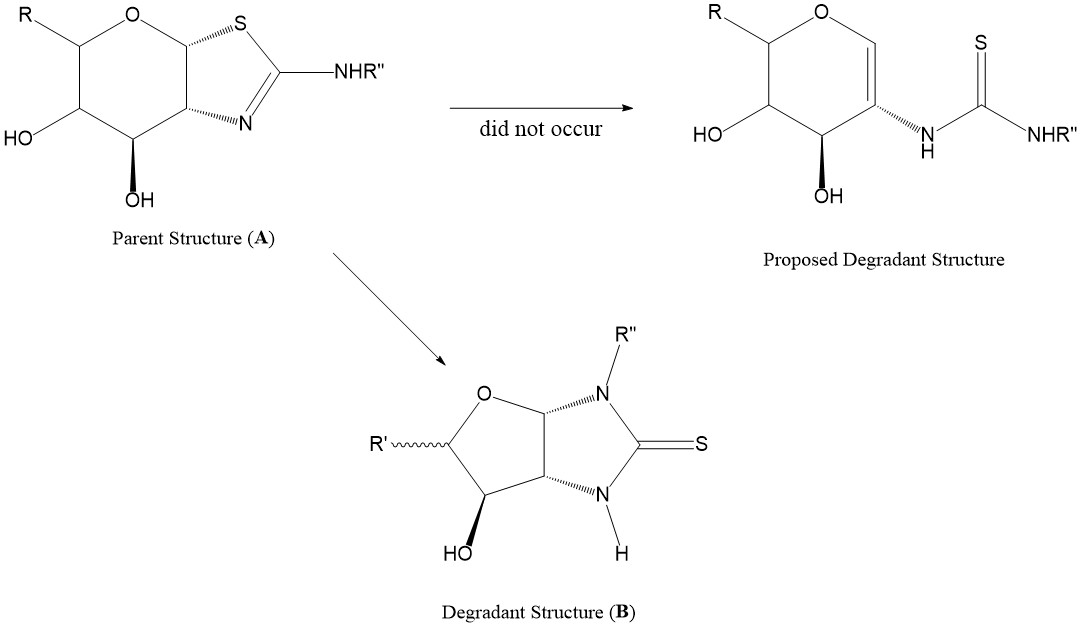