Purpose: Psychostimulant abuse is a significant public health problem. There are no FDA-approved pharmacotherapies to treat cocaine-use disorder (CUD). Medication development efforts have examined substitute agonist therapies. 3-fluoroamphetamine (also called PAL-353) is a synthetic amphetamine analog that was efficacious following acute administration as well as when administered continuously through an indwelling catheter for the treatment of CUD, yet no studies have characterized its pharmacokinetics (PK). Since transdermal delivery may be an optimal approach to delivering PAL-353 for CUD, in the present study, we determined the PK of PAL-353 in male Sprague Dawley rats following intravenous and transdermal routes of administration. A desirable transdermal pharmacokinetic profile for PAL-353 should allow for a short latency, a controlled and prolonged delivery, and a rapid clearance following drug removal.


Methods: PK studies were performed in the male, Sprague Dawley rats weighing 234–302 g (6–8 weeks old) following procedures approved by the Mercer University Animal Care and Use Committee. Animals were randomly divided into intravenous and transdermal groups (n=3) after one week of acclimation. A crossover design was utilized with a washout period of at least seven days between experiments. Animals were fasted overnight before dosing but with free access to water. Intravenous bolus injections (5 mg/mL of base equivalency in normal saline) were given through the lateral tail vein at a dose of 5 mg/kg. Animals in the transdermal group were administered a 10% w/w hydroxypropyl methylcellulose E4M gel (50 mg of gel over 5 cm2) on the dorsum 24 h after the hair was shaved using an electric groomer (Norelco, Philips, Andover, MA). The double-stacked single-sided medical tape with a total thickness of 0.254 mm (3MTM1521, 3M, St. Paul, MN) was cut out with an area of 5 cm2 and attached to the skin to form a reservoir for gel application. After the gel was thoroughly spread over the application area, a piece of Tegaderm was mounted over the reservoir to prevent the gel from rubbing off. Blood samples (0.15 mL) were collected under isoflurane (1–3% induction, maintenance to effect) from the lateral tail vein and placed in tubes with anti-coagulant EDTA-K2 at 0, 0.25, 0.5, 0.75, 1.5, 3, 6, 9, 12, 15, 18, 21, and 24 h for the intravenous group, and 0, 0.25, 0.5, 1.5, 3, 6, 9 (gel removal), 10.5, 12, 15, 18, 21, and 24 h for the transdermal group, respectively. Plasma samples were harvested and then analyzed using a novel bioanalytical method that coupled liquid-liquid extraction and LC-MS/MS. The rodent PK data were verified by examining in vitro permeation through human epidermis mounted on Franz diffusion cells. The skin surface was maintained at 32 °C. A dose of 10 mg/cm2 of gel (corresponding to 0.5 and 1 mg/cm2 for PAL-353) was dispensed and gently spread over the exposure area of 0.64 cm2 using an electronic positive displacement pipette (Repeaterâ E3x, Eppendorf, Hamburg, Germany). Then, the receptor compartment samples (PBS, 300 μL) were collected at 0, 0.25, 0.5, 1.5, 3, 6, 9, 22 and 24 h and analyzed using a validated HPLC-UV method. An in vitro-in vivo correlation (IVIVC) analysis was performed using the Phoenix IVIVC toolkit to assess the predictive relationship between rodent and human skin absorption/permeation.


Conclusion: We have characterized the PK profile of PAL-353, demonstrated that it has favorable PK properties for transdermal administration for CUD, and provided preliminary evidence of the capacity of rodent data to predict human skin flux. 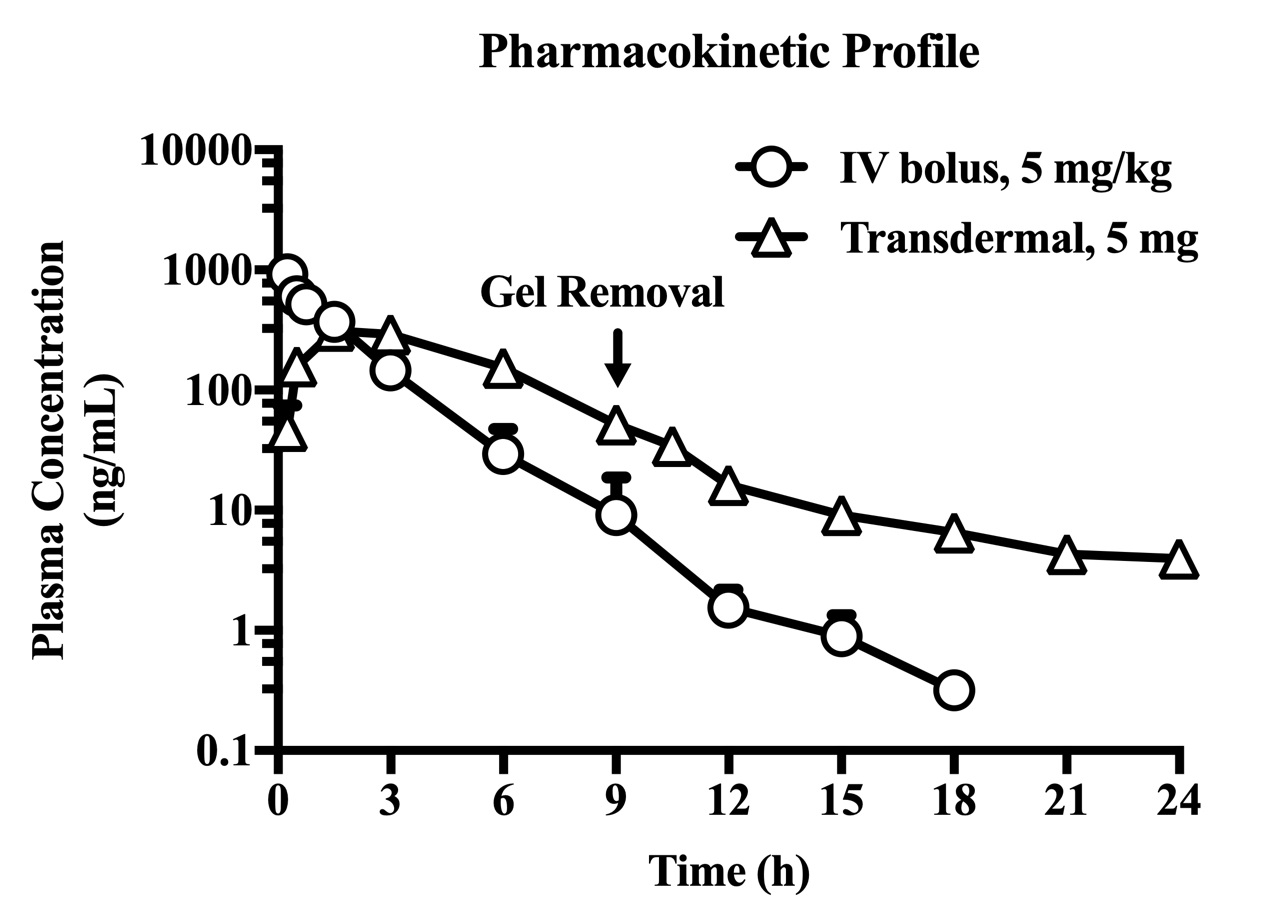 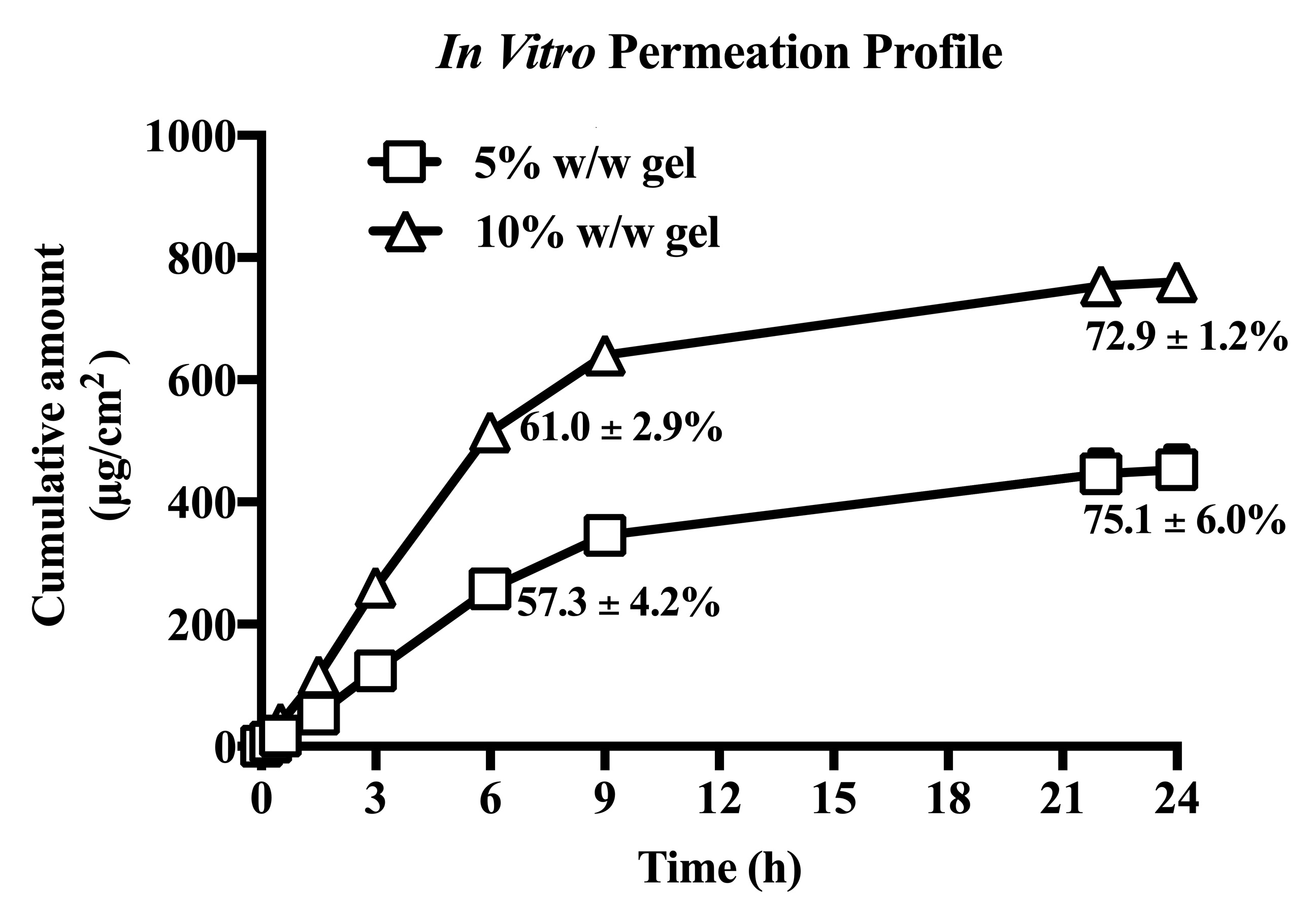