Purpose: In the soft shell capsule manufacturing process, there are four critical steps; 1) preparing the shell material, 2) preparing fill materials, 3) encapsulating fill materials, and 4) drying the finished capsules. Throughout this process, capsule shell gel strength and film strength play a critical role in encapsulating, sealing, drying, and final handling and performance of the soft capsules. Therefore, the purpose of this work was to compare the gel strength and the physical properties of shell materials made from gelatin and SeaGel® formulations. Additionally, the drying kinetics have a significant impact on the properties of the final soft shell dosage forms. This study investigated and compared drying kinetics between the two different material formulations under various drying conditions.


Methods: Representative gel mass and film samples were made for formulations containing gelatin or SeaGel® carrageenan and starch. The gelatin gel mass was prepared using a two-prong HV-blade mounted in a Ross mixer, to reduce air entrapment that can occur with agitation. Additional water was back added after initial gel preparation, to achieve the desired 40% moisture content, due to loss during preparation from frequent vacuum application. The SeaGel® gel mass was prepared in a three step process. First two separate slurries were prepared, one of the carrageenan and plasticizer, and the other of starch and water. The slurries were then combined in a Ross mixer equipped with a rectangular blade and allowed to stir at elevated temperature under constant vacuum. The prepared gel masses were then fed into an encapsulation line and the resulting ribbons formed on the drums were used as the film specimens. Gel strengths were measured in a similar manner to a standard gelatin bloom test. The as prepared gel mass formulations were measured using a TA XT Plus (Stable Micro Systems) equipped with a half inch, flat face probe. The probe was operated at a speed of 0.5 mm/sec and the force required to penetrate 4 mm into the gel mass was recorded as the gel strength. Drying rates of wet films were measured using a Q500 TGA by TA instruments. Samples were held at either 25°C, 35°C, or 45°C for 6 hours to ensure that the film was completely dry.


Results: The relative gel strengths of the gelatin and SeaGel® formulations were investigated. A standard gelatin “Bloom test” was applied to the as formulated gel mass to determine a gel strength for the two different materials. The gel strength was measured at 4°C, 25°C, and 37°C and the data are shown in Figure 1. In all cases, the SeaGel® gel mass shows a higher strength than the gelatin, and has a much smaller change in gel strength when measured at different temperatures. The higher gel integrity at elevated temperatures could lead to improved handling of the gel mass and therefore better encapsulation performance.


Conclusion: A standard gelatin Bloom test was performed on the as prepared gel masses to understand relative gel strengths of the materials. The SeaGel® material showed a higher gel strength at all temperatures investigated, and had less of a dependence on temperature than did gelatin. The drying kinetics of gelatin and SeaGel® films at different temperatures was investigated. At elevated temperatures SeaGel® films had a faster drying rate than gelatin films at an equivalent moisture content and did not show signs of melting indicating a higher thermal stability of SeaGel®. 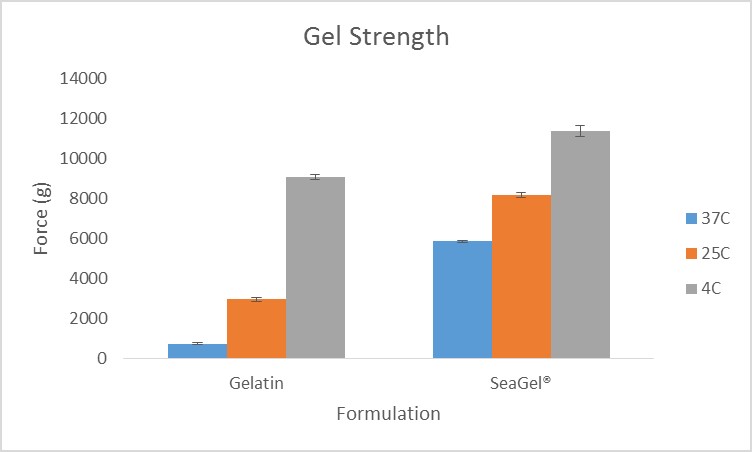 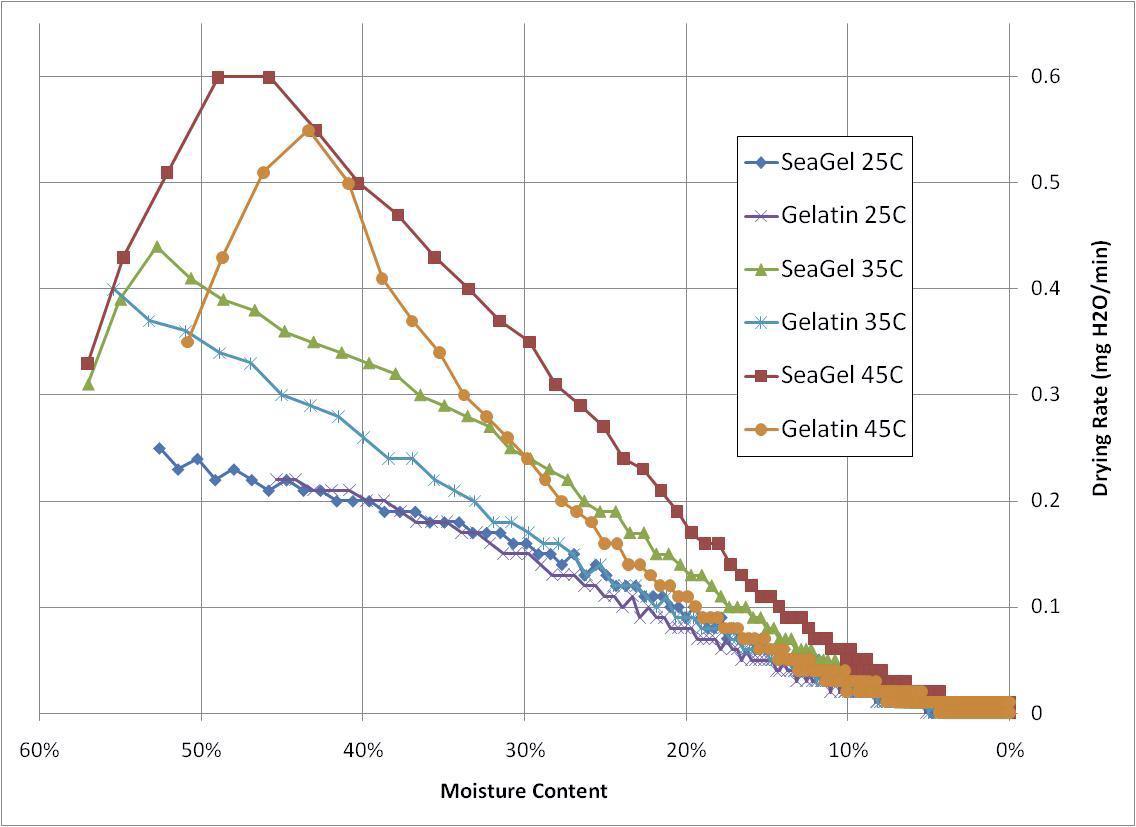 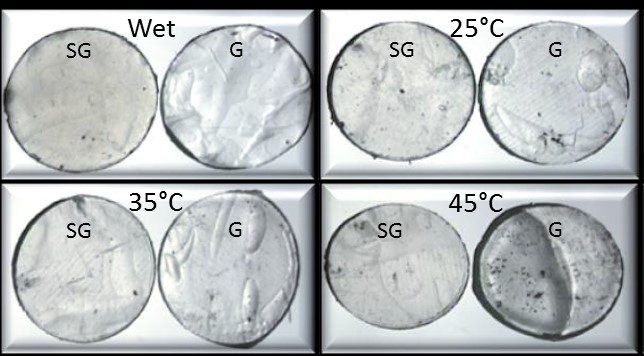