Purpose: Voriconazole (formerly known as UK-109,496), is a second-generation triazole antifungal agent widely used in the treatment of invasive fungal infections. Voriconazole is a potent competitive and noncompetitive inhibitor of CYP3A4, which metabolizes ~50% of the marketed drugs. Coadministration of CYP3A4 substrates with voriconazole is highly likely to result in clinically relevant drug-drug interactions (DDIs). The primary route for voriconazole elimination is metabolism, mainly catalyzed by the isoenzyme CYP2C19 with minor contributions of other enzymes. Therefore, pharmacokinetics (PK) and the extent of DDIs is influenced by the CYP2C19 genotype. The goal of this work was to develop and validate a mechanistic absorption model (MAM) and physiologically based pharmacokinetic (PBPK) model of voriconazole that could be used for quantitative prediction of DDIs with co-administered CYP3A4 substrates.


Methods: GGastroPlus™ 9.6 Advanced Compartmental Absorption and Transit™ (ACAT™), PBPKPlus™, DDI and Metabolism and Transporter modules were used to build the MAM/PBPK model for voriconazole. Tissue volumes, weights, and blood perfusion rates were generated by the program’s internal Population Estimates for Age-Related (PEAR™) Physiology™ module. Physicochemical and biopharmaceutical inputs were either obtained from literature or predicted by ADMET Predictor™ 9.0. Individual tissues were modeled as perfusion-limited tissues and the tissue/plasma partition coefficients (Kp) were estimated using default Lukacova method. Metabolism of voriconazole by CYP2C19, CYP3A4 and minor FMO3 enzymes was modelled by Michaelis-Menten kinetics with the GastroPlus built-in expression levels in gut and liver for CYP2C19 and CYP3A4 and fitted value for FOM3 in liver. Autoinhibitory effects of CYP2C19 and 3A4 were included in the model. The Km values for all three enzymes and Ki value for irreversible inhibition of CYP3A4 were obtained from literature. Vmax for all three enzymes, Ki value for irreversible inhibition of CYP2C19 and inactivation rates for CYP2C19 and 3A4 values were fitted to in vivo data after oral administrations of 200 mg twice daily doses of tablet for 13 days and a single 200 mg dose on day 14 in mostly Caucasian subjects (90% of subjects were CYP2C19 extensive metabolizers) [1]. The model was validated by comparing simulated and observed plasma concentration-time (Cp-time) profiles of voriconazole following oral administrations of tablet for different dosing regimen (day 1: 400 mg twice daily, days 2-9: 200 mg twice daily and day 10: a single 200 mg dose) from a different study (83% extensive metabolizers) [2]. Drug-drug interactions following IV and oral administrations of midazolam [3, 4] and IV administration of alfentanil [5] mediated mainly by CYP3A4 inhibition were predicted through dynamic simulations in GastroPlus DDI module using the validated midazolam and alfentanil PBPK models. IC50 value for reversible inhibition of CYP3A4 was obtained from the literature.


Results: The developed PBPK model adequately captured the observed voriconazole Cp-time profile following oral administration as shown in Figure 1. The model also successfully described observed Cp-time profiles for both voriconazole and midazolam from clinical drug interactions study (Figure 2). The predicted effects of voriconazole on midazolam and alfentanil area under the Cp-time curve from time zero to time extrapolated to infinity (AUC0-inf) and/or maximum plasma concentration (Cmax) were in close agreement with observed values for different dosing regimens (Table 1). These results showed that dynamic simulations adequately predicted the effect of CYP3A4 competitive and noncompetitive inhibition by voriconazole on the PK of midazolam and alfentanil.


Conclusion: The work demonstrates the utility of the MAM/PBPK approach to predict DDIs. The mechanistic absorption and PK of voriconazole were adequately described using physiological and drug-specific parameters along with the enzyme kinetics. The model successfully captured the dose and time-dependent PK of voriconazole, and adequately predicted its DDIs with midazolam and alfentanil - primarily related to voriconazole competitive and noncompetitive inhibition of CYP3A4-mediated metabolism. This model can be utilized for quantitative prediction of DDIs effect of voriconazole on other CYP3A4 substrates. 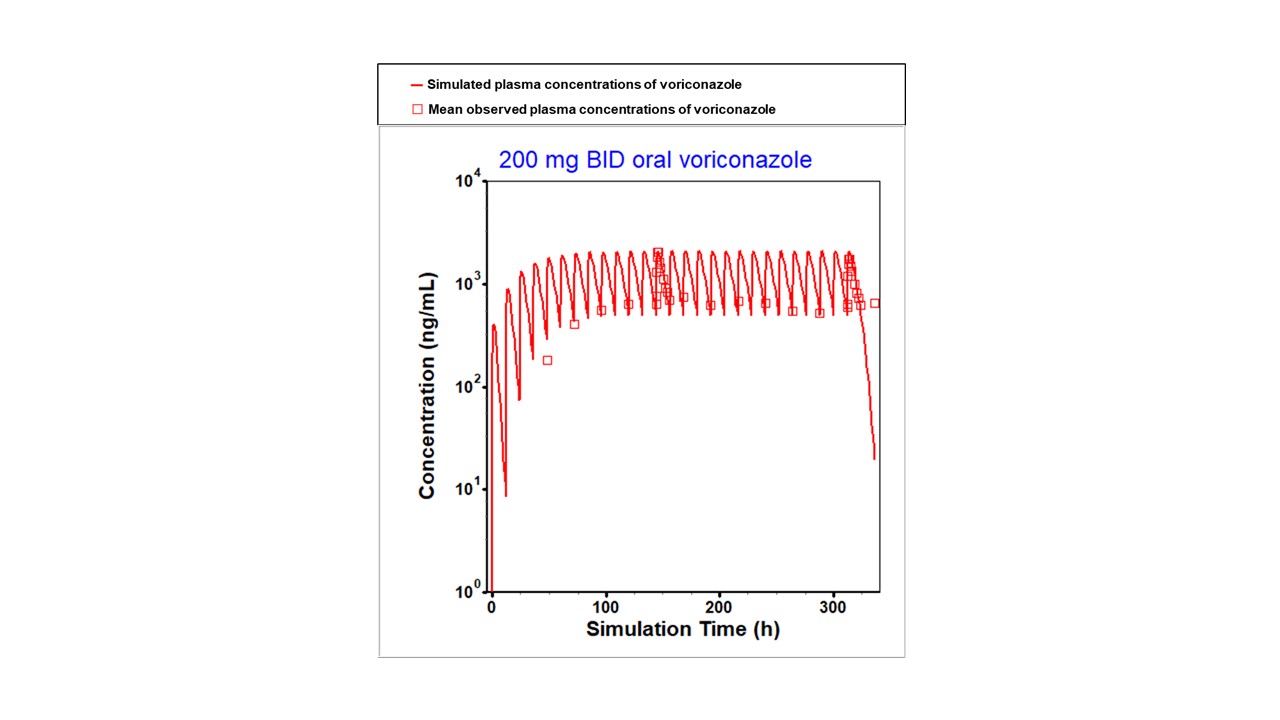 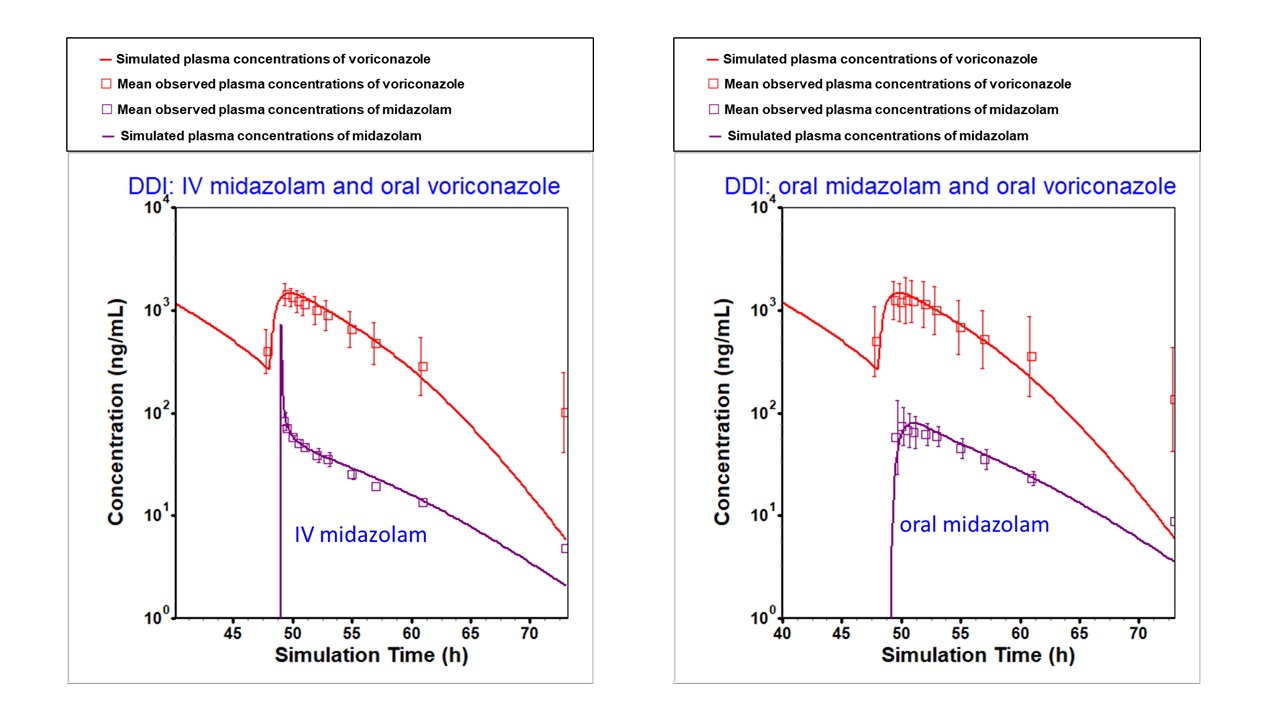 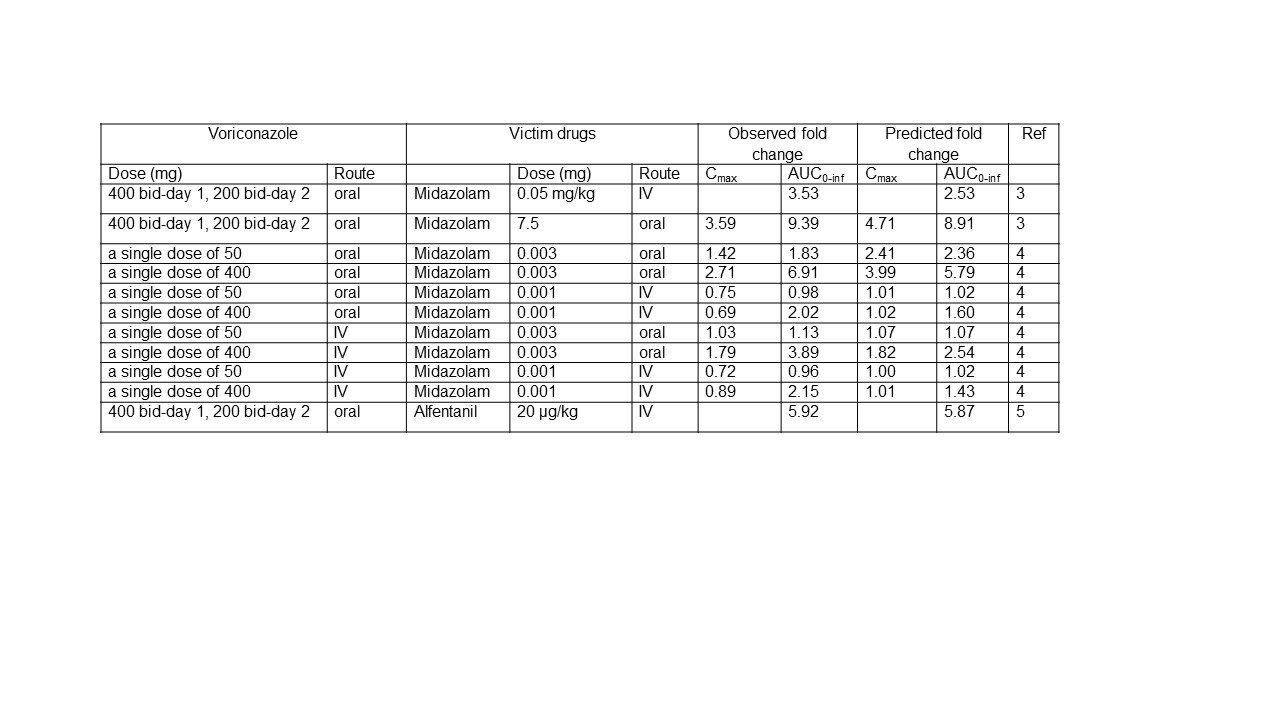