Purpose: For topical semisolid dosage form, besides the selection of functional excipients, such as emulsifiers and thickeners, the arrangement of matter (Q3) is also important to determine the drug release profile. The rheological characteristics of semisolid systems have been investigated to explore the relationships between the strength of structure and the release rate of drug [1-3]. But, the conclusion is still in dispute because of the complexity of multiphase structure in semisolid formulation and the interactions between vehicle and drug substance.

This work tried to explore the correlation between rheological behavior and the release rate of active compound. 811, which is a synthetic purine nucleoside analog for the treatment of herpes simplex virus infections, was selected as model compound. A typical o/w emulsion was prepared in which 811 exists mostly as suspension form.


Rheology: Anton Paar MCR 102 rheometer with 25mm sandblasted parallel plate and geometry gap of 0.5mm. All tests were performed in triplicate and results were expressed as mean ± SD.

In vitro release test (IVRT): A vertical diffusion cell system was used to perform IVRT using an appropriate receptor medium and a synthetic and inert membrane. The experiment is carried out at 32±1⁰C in six replicate per run by manual sampling at 0.5h or 1h intervals over a 4 hours’ period.


Results: Rheological Characterization
1) Oscillation strain sweep
As shown in Fig. 1, four 811 creams exhibited typical viscoelastic behavior with the increasing of shear strain. The linear viscoelastic region (LVR) was identified where the storage modulus remained constant. The limit of LVR was calculated based on the boundary definition of 3%. When shear strain exceeded the LVR, the storage modulus (G’) and the loss modulus (G”) decreased and arrived at flow point where G’=G”, which indicates the internal structure is breaking to such an extent causing the material to flow.
As summarized in Table 2, the rheological parameters of these four creams was influenced by the homogenization conditions. The longer duration or higher speed of homogenization led to the increasing of G’ on the LVR at 0.1% strain while the value of strain at both LVR limit and flow point decreased, which suggests enhanced homogenization will increase the hardness of the microstructure of emulsion.
2) Shear flow test
Four 811 creams showed similar shear-thinning behavior. As summarized in Table 2, the same effect of homogenization was observed at the shear rate of 0.01S-1 that increased viscosity was obtained under stronger homogenization conditions. But, this increasing trend was not obvious at the shear rate of 1S-1 and 100S-1. It can be elucidated that the contribution of microstructure strength to the viscosity became weak while the intrinsic property of excipient plays a dominant role at high shear rate.
IVRT
The in vitro release profile of four 811 creams were shown in Fig. 2. As summarized in Table 2, the correlation coefficient between mean release rate and rheological properties were calculated. Strong correlation with release rate was found for the values of G’ on the LVR at 0.1% stain, strain at LVR limit and flow point. In current o/w creams, 811 exists mostly as suspension form due to poor solubility in both water and oil phase. As a result, the release of 811 is mainly related to the diffusion and convection of drug particles and influenced by the apparent viscosity or macroviscosity of the vehicle [1]. The value of G' on the LVR at 0.1% strain directly reflected the strength of microstructure. The lower % strain at LVR limit and flow point indicated that the structure become more rigid and tend to exhibit brittle fracture behavior.


Conclusion: This work investigated the effect of rheological behavior on the in vitro release rate for 811 cream, which indicates the increase of microstructure strength will inhibit the diffusion of active compound with limited solubility in the emulsion. This correlation between rheological properties and mean release rate allows an easy method for product design and manufacturing release control. 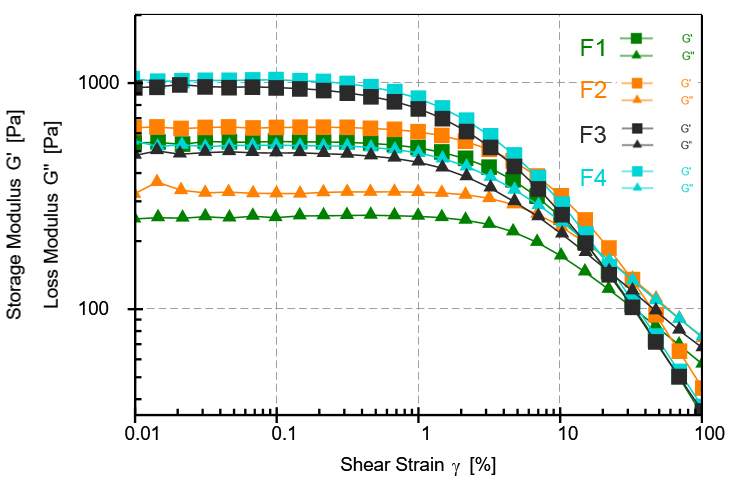 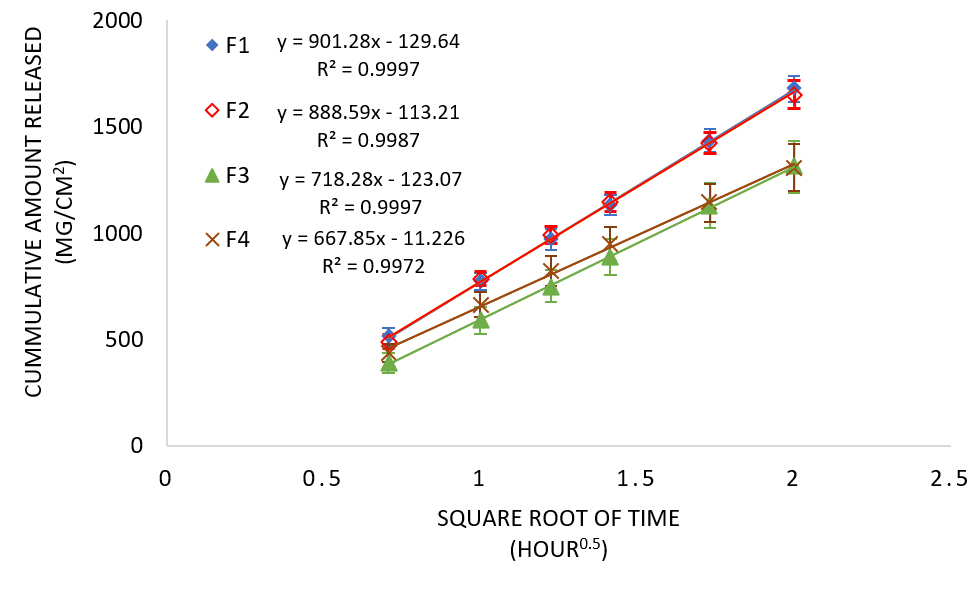