Purpose: Propranolol (PRO) is a first generation β blocker. Due to its poor solubility it has been marketed as a hydrochloride salt. Despite its safety and efficacy, this salt has poor oral bioavailability and decreased solubility due to common ion effect. Therefore a need for screening of alternative forms such as: salts, co-crystals, ionic liquids or eutectics has arisen. As PRO is a weak base and consequently can form different salts with pharmaceutically acceptable counter ions, the synthesis of a number of other salts with small organic counterions such as oxalate, maleate and fumarate has been reported [1]. Stott et al. have published on PRO being able to form eutectic as well as multicomponent (salt) phases with lauric and capric acids, monocarboxylic acids [2]. Dicarboxylic acids are widely used counterions since they are multi-ionisable and therefore phases at different stoichiometries may be formed. The formation of a new solid state forms composed of PRO and azelaic acid (AZE) was investigated by detailed physicochemical studies.


Methods: Propranolol hydrochloride was purchased from Glentham Life Sciences (UK) and AZE was purchased from Sigma Aldrich (Ireland) each with at least 98% reported purity. Ethanol was obtained from Fisher Scientific, UK and was of HPLC grade. PRO free base was precipitated out by mixing PRO•HCl solution with saturated NaCO3 solution. PRO was then washed, filtered under vacuum and oven dried for 5 hrs at 70 °C. Di-propranolol azelate (DPA) crystals were obtained from ethanol solution of PRO and AZE mixed in stoichiometry 2:1 via standard solvent evaporation method. Physical mixtures of AZE and DPA were prepared by grinding the compounds in appropriate molar ratios in an agate mortar and pestle to obtain homogenous powders. DSC measurements were carried out using a PerkinElmer Diamond DSC unit (USA). The unit was refrigerated using an ULSP B.V. 130 cooling system (Netherlands). A heating rate of 10 °C/min was used with nitrogen (40 ml/min) as the purge gas. A single crystal of di-propranolol azelate with approximate dimensions 0.100 mm x 0.170 mm x 0.310 mm, was used for X-ray crystallographic analysis. The X-ray intensity data were measured at 180K on a Bruker Kappa Apex Duo with an Oxford Cobra low temperature device using a MiTeGen micromount.


Results: A new salt, di-propranolol azelate (DPA), was recrystallised from ethanol. Its structure has been obtained (Fig. 1). The dashed lines represent hydrogen bonds present between O20 and N16 and O22 and the hydrogen atom attached to O14. The ionisation of AZE and PRO is visible with the proton transfer occurring from O20 to N16. The single crystal structure revealed that stoichiometry of this new salt is 2:1 PRO:AZE. DSC thermograms of AZE:DPA mixtures are shown in Fig. 2.

All binary physical mixtures composed of AZE and DPA display an endotherm at a constant temperature of around 72 °C, which may indicate the formation of a eutectic phase between the salt and the acid. From the DSC analysis it is expected that the composition of the eutectic is around 0.5 mol of PRO as at this composition a single, sharp endotherm is produced which has the highest enthalpy.


Conclusion: A structure of a new salt, di-propranolol azelate with a melting point of 149.2 ºC, was solved. Moreover, it has been shown by thermal analysis and construction of a phase diagram that the salt is able to form a eutectic phase, melting at ~72 ºC, with AZE. In addition, the eutectic composition is a promising candidate for pharmaceutical processing as it has a lower melting point than pure PRO, which may prevent thermal degradation of the drug. 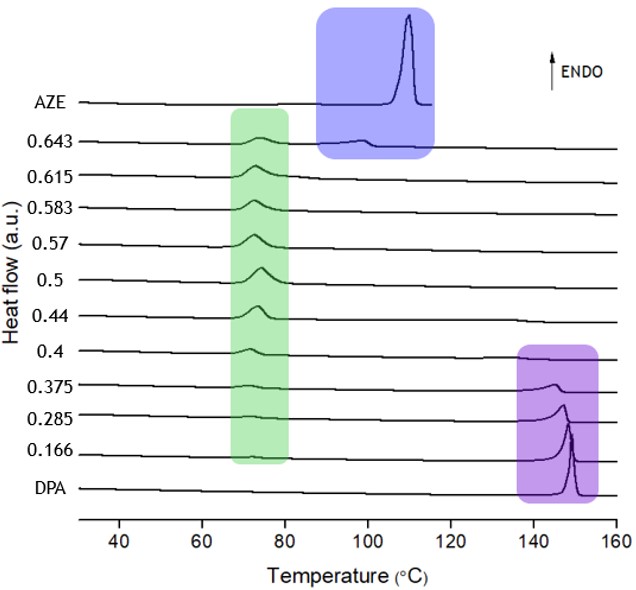 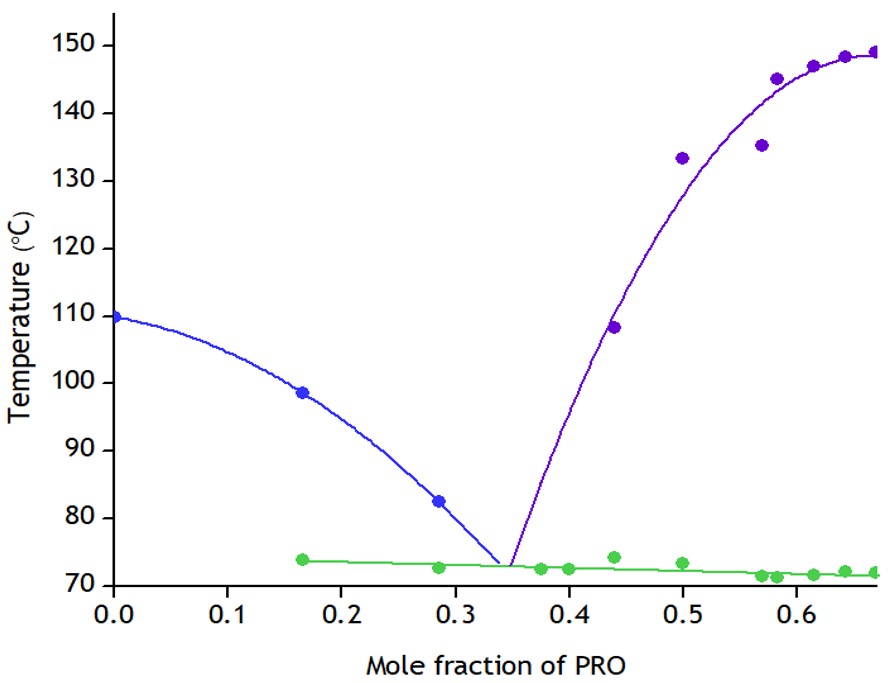