Purpose: The first gene therapy clinical trials were started nearly 30 years ago, but the field only now seems to be on the verge of wide spread adoption. Safe and efficient gene delivery, however, is still a major obstacle and is often described as “the Achilles’ heel of gene therapy.”Vectors for delivering genes are typically classified as either viral or non-viral. Although there are a variety of advantages and disadvantages associated with each class of vector, viral vectors remain the preferred approach. In fact, viral vectors have been used in approximately two-thirds of the clinical trials performed to date. Of the viral vectors used in these trials, adenovirus (Ad) is the most common. Adenovirus fiber and capsid proteins, however, mediate an inflammatory response and initiate clearance of the virus in patients with pre-existing immunity. Further, adenovirus infection relies on interaction of the virus with the coxsackie adenovirus receptor (CAR), which limits the ability of the virus to deliver genes into CAR-negative cells such as endothelial cells, epithelial cells, smooth muscle cells, and some cancers. Our objective was to develop and study a hybrid vector that provides advantages over both viral and non-viral vectors.


Methods: A fiberless adenovirus (FlAd) was produced by genetically removing the fiber gene with the aim of reducing the related drawbacks associated with tropism and immunogenicity. Potential replacements for the fiber protein included polyethylene glycol grafted poly-L-lysine copolymer (PLL-g-PEG). A copolymer library was synthesized using 550 Da, 2 kDa, and 5 kDa PEG and PLL (4–15, 15–30, and 30–70 kDa) with different degrees of grafting (5, 10, and 25%). The hybrid vectors were formed by electrostatically associating PLL-g-PEG with FlAd at different ratios (0.001 to 1 µg/106 virus particles), where “design of experiments” was used to optimize the approach. The hybrid vectors size and zeta potential were measured using DLS technique and transmission electron microscopy was used to study particle morphology. The hybrid vectors were evaluated by their ability to infect both CAR-positive (HEK 293) and CAR-negative (NIH 3T3) cells. To guide further development of the hybrid vector, we investigated the mechanisms of intracellular trafficking by measuring transduction efficiency and cellular internalization in the presence of a panel of drug inhibitors of various endocytic pathways. The performance of the hybrid vector was compared to native and fiberless adenovirus to understand potential bottlenecks in the delivery process.


Results: Transmission electron microscopy was used to confirm association of the virus particles and polymer and to study particle morphology. The hybrid vector complexes had an icosahedral to spherical shape with a hydrodynamic diameter ranging from 120–305 nm and a zeta-potential ranging from -3 to 19 mV. The cell transduction studies indicated that fiberless Ad alone was not able to infect cells with the same efficiency as the native Ad due to the absence of the fiber and knob which facilitate binding to CAR receptors. PLL-g-PEG/FlAd hybrid vectors were able to transduce CAR-positive HEK 293 cells and CAR-negative NIH 3T3 cells with a 3.3 and 8.5-fold increase compared to unmodified flAd. Addition of the PLL-g-PEG copolymer restored 70% of the infectivity of Ad in HEK 293 cells that was lost as a result of removing the fiber and knob. In addition, the hybrid vector was non-cytotoxic on both cell types. The intracellular trafficking of the hybrid vector was dependent on the properties of the copolymers. The hybrid vectors used a combination of clathrin- and caveolar-dependent endocytosis and macropinocytosis and caveola mediated endocytic pathways to enter the cell.


Conclusion: The synthetic component of hybrid gene delivery vectors plays a significant role in their cellular interactions gene delivery. Ultimately our goal is to transition from viral to non-viral vectors that maintain the same level of transduction efficiency. By understanding how our current hybrid vectors compare to the native virus, and by determining the bottlenecks in the gene delivery process, we hope to be able to design materials to specifically overcome these bottlenecks. This stepwise transition from viral to non-viral vectors will lead to novel vectors that are both safe and highly efficient. 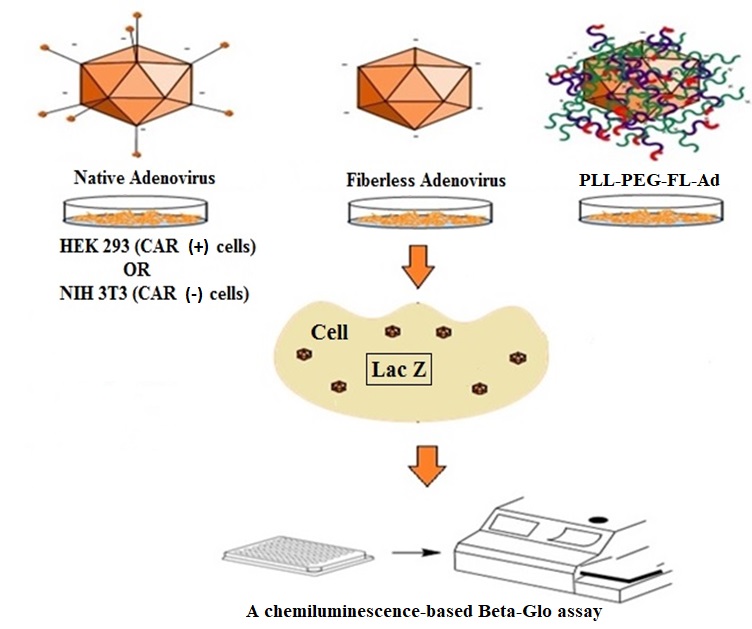