Purpose: Functional excipients are critical components of extended release formulations for providing long-term delivery of active pharmaceutical ingredients (APIs). Furthermore, these functional excipients have a significant impact on the rate and mechanism of API release during dissolution. In this study, a rate-controlling polymer, hydroxypropyl methylcellulose (HPMC), was investigated for its role in API dissolution from extended release formulations. HPMC is a water soluble and swellable polymer that is utilized for controlling the rate of release of API through the formation of a gel layer at the tablet-solution interface. As is it hydrated, the gel layer allows for diffusion of water-soluble molecules through the tablet into the bulk solution in a controlled manner. The gel thickness and strength can be modulated by varying the amount of polymer in the formulation and this in turn can be used to control the release rate of API. The purpose of this study was to measure both HPMC and API dissolution from extended release tablets and use this information to provide insight into the specific release mechanisms of the formulations.

Interestingly, all formulations released a similar absolute mass of polymer (Figure B) at time points before 8 hours, yet a clear trend can be seen in the API dissolution rate (Figure A - solid dissolution profiles) depending on the amount of HPMC in the formulation. These results suggest that it is likely the swelling/gelling properties of HPMC that contributed to the differential release of API from the tablets. It is hypothesized that the strength of the HPMC gel formed at the solid-liquid interface is responsible for controlling the rate of diffusion of the API out of the tablet matrix. For example, the gel layer formed in the 10% HPMC tablets was likely weaker (compared to the gel layer of the 35% HPMC formulation) allowing drug molecules to diffuse out of the system at a faster rate.

A simple model based on the total API and polymer release was utilized to calculate the percentage of drug diffusion at each time point. These results were plotted as a function of percent HPMC in the formulation (Figure C). The data indicated that higher levels of HPMC in the tablets led to a more diffusion-based release mechanism of the API. It is suspected that this was due to a stronger HPMC gel formed at the 35% HPMC level and diffusion was the main driver for API leaving the solid matrix. The 10% HPMC formulation exhibited weaker-gelling properties therefore a combination of diffusion and erosion-based mechanisms were responsible for the API release. In addition, the results presented in Figure C indicated that the percent of diffusion decreases over time for all HPMC formulations tested and erosion becomes more influential in the release of API at later time points.


Conclusion: In this study, it was demonstrated that HPMC can be used as a rate-controlling polymer to tune the release of API from tablet matrices. The data indicated that HPMC gel-strength plays a major role in modulating API release and that the mechanism of release (diffusion versus erosion) is dependent on the amount of HPMC contained in the formulation. Further work showed that the release mechanism of the tablets during dissolution can be altered by changing the type and concentration of ions in the media. These insights help provide a better understanding of API release from HPMC-based drug products and shed light on the influence of ions on HPMC properties during dissolution. 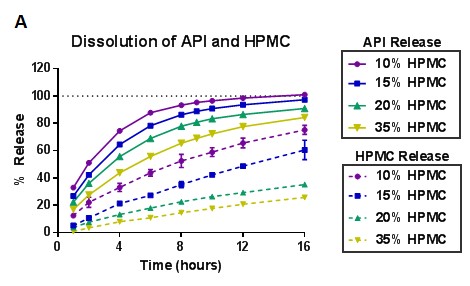 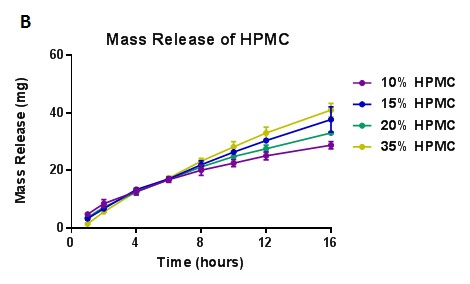 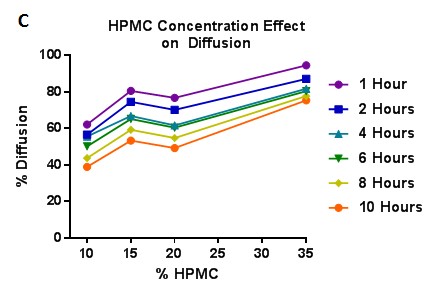