Purpose: As the most widely used oral dosage form, tablets are widely manufactured, tested, and regulated. The disintegration of a tablet and, subsequently, release kinetics of the active pharmaceutical ingredient (API), is facilitated by utilizing swelling polymers and/or polysaccharides as disintegrants. The disintegration process governs the drug release kinetics, playing a key role in determining drug dissolution and eventual absorption and bioavailability. It is thus of great importance to fully understand and predict the disintegration and dissolution processes, enabling the rational design of tablet formulation. Current computational methods [1,2], nonetheless, neglect the fluid dynamics around the tablet (for example, in a testing device or even in the gastrointestinal tract) and, more importantly, fail to realistically model the mutual influence between the fluid and drug/excipient particles. Herein, we aim to develop a high-fidelity, physics-based simulation method of tablet disintegration and dissolution. We have developed a computational platform which can simulate three basic processes of tablet dissolution, including fluid-solid interaction, particle disintegration, and particle dissolution. For this purpose, we have utilized the Lattice Boltzmann Method (LBM) as the general framework and integrated Bonded Particle Model (BPM, which is a variation of Discrete Element Model) with immersed moving boundary method.


Methods: A tablet is modeled as an assembly of individual, contacting particles of API and excipients. Their bonding interactions can be described by the bonded particle model [3]. Translation and rotation of particles are governed by Newton’s second law. Contact bonds or forces are modeled by the force-displacement law. The bonds between particles will be broken when external forces and internal swelling forces exceed critical thresholds. Swelling of disintegrated particles is determined by calculating the weight change of a particle due to water uptake. Dissolution of such a disintegrated particle is also considered following the advection-diffusion model.

We have developed a computational platform of particle dissolution in the fluid by utilizing open source LBM C/C++ libraries (Palabos®) and BPM/DEM libraries (LIGGGHTS®). As shown in Figure 1, the fluid phase is evaluated using the Lattice Boltzmann Method. LBM uses the particle distribution function to represent the fluid, from which the velocity and density of the fluid can be calculated [4]. In addition, dissolved drug concentration is computed using a scalar distribution function developed from the lattice Boltzmann method [5]. The fluid-solid interaction is modeled by the immersed moving boundary method [6]. Fluid dynamics exert shear and normal forces on each particle, affecting water uptake kinetics which is modeled by BPM. Dissolution of a particle is based on the advection-diffusion model.


Results: Based on the integrated LBM/BPM model, we have set up a different scenario of drug particle dissolution tests. One example is the simulation of tablet disintegration in USP Apparatus II, the size of the USP apparatus II vessel and the paddle is based on the USP specifications in general Chapter < 711 >. The dissolution vessel and paddle are modeled by 3D meshes as simulation boundaries; rotation of the paddle can be simulated as moving boundaries in LBM. The tablet is modeled by a compact of around 300 BPM particles with a initial radius of 1.2 mm. By running this simulation, we could evaluate the influence of hydrodynamic force on drug tablet disintegration and particle dissolution. As shown in Figure 2, because of the hydrodynamic force driven by the movement of paddle USP Apparatus II, there exists an upgoing force which will lift the tablet up and facilitate the disintegration of the tablet as well as the dissolution of tablet particles. By comparing Figure 3 with Figure 2, we can see the impact of bonding force on the distribution of particles. By removing the bonding forces between drug particles, the tablet is easily disintegrated by the hydrodynamic forces. And the dissolution of particles is thus facilitated.


Conclusion: Our simulation advances simulating and predicting in vitro dissolution of tablet products. Different from previous CFD simulation of USP apparatus II which mostly focus on the distribution of hydrodynamic force and velocity field, our simulation couple both velocity and concentration distribution, as well as the impact of hydrodynamic force on drug tablet particles. Through this work and the following studies, we set to understand the drug concentration distribution in the USP apparatus II vessel and how to best sample the solution in practice. Our future efforts will be built upon this study and predict disintegration and dissolution kinetics of real tablet products under in vivo condition. 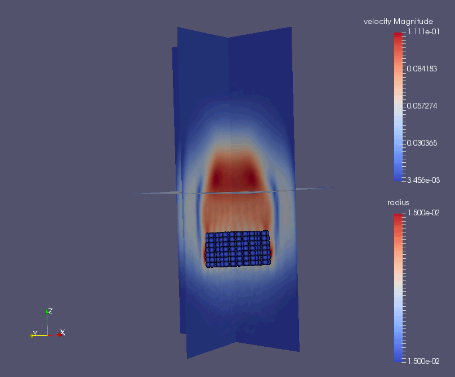 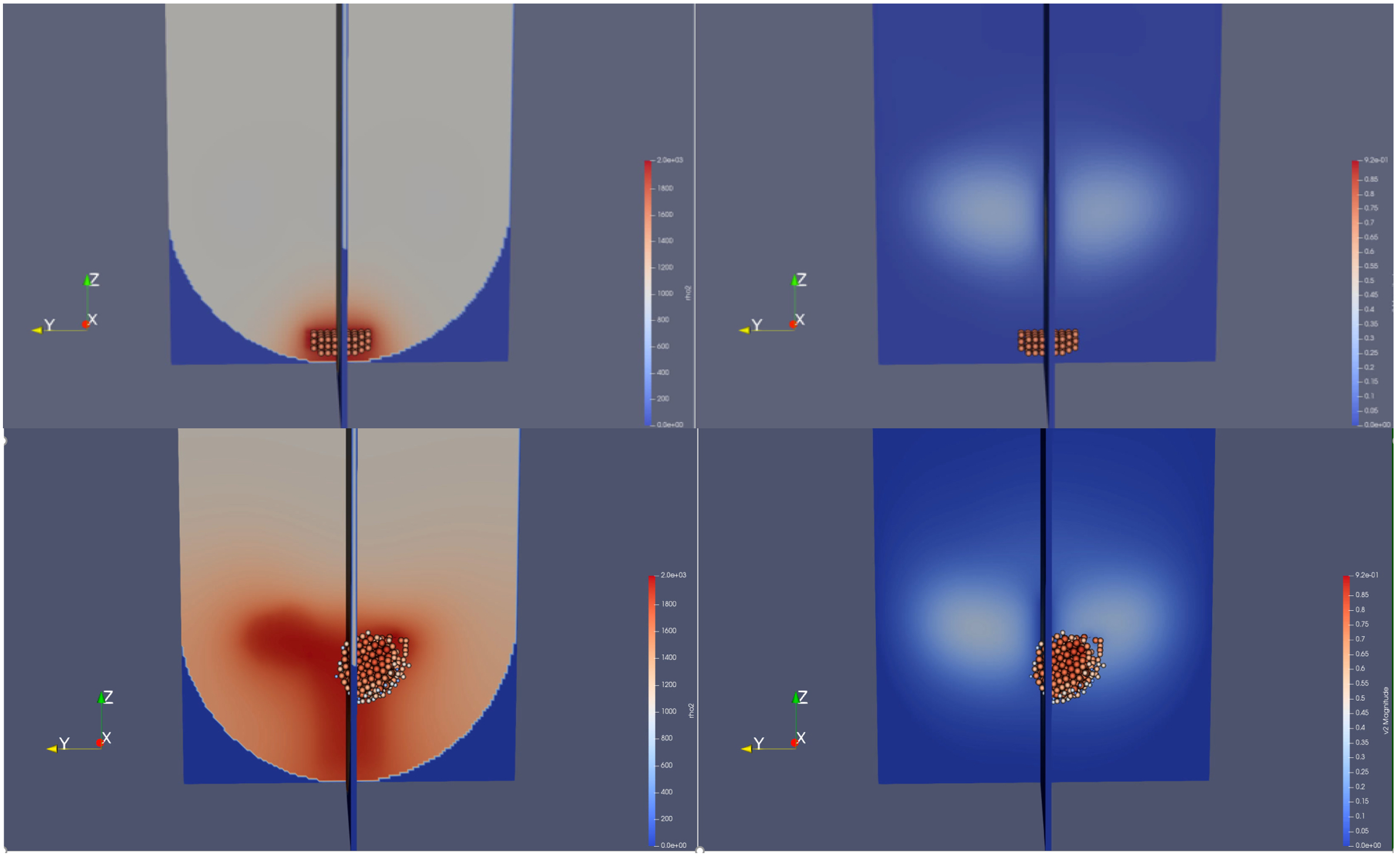 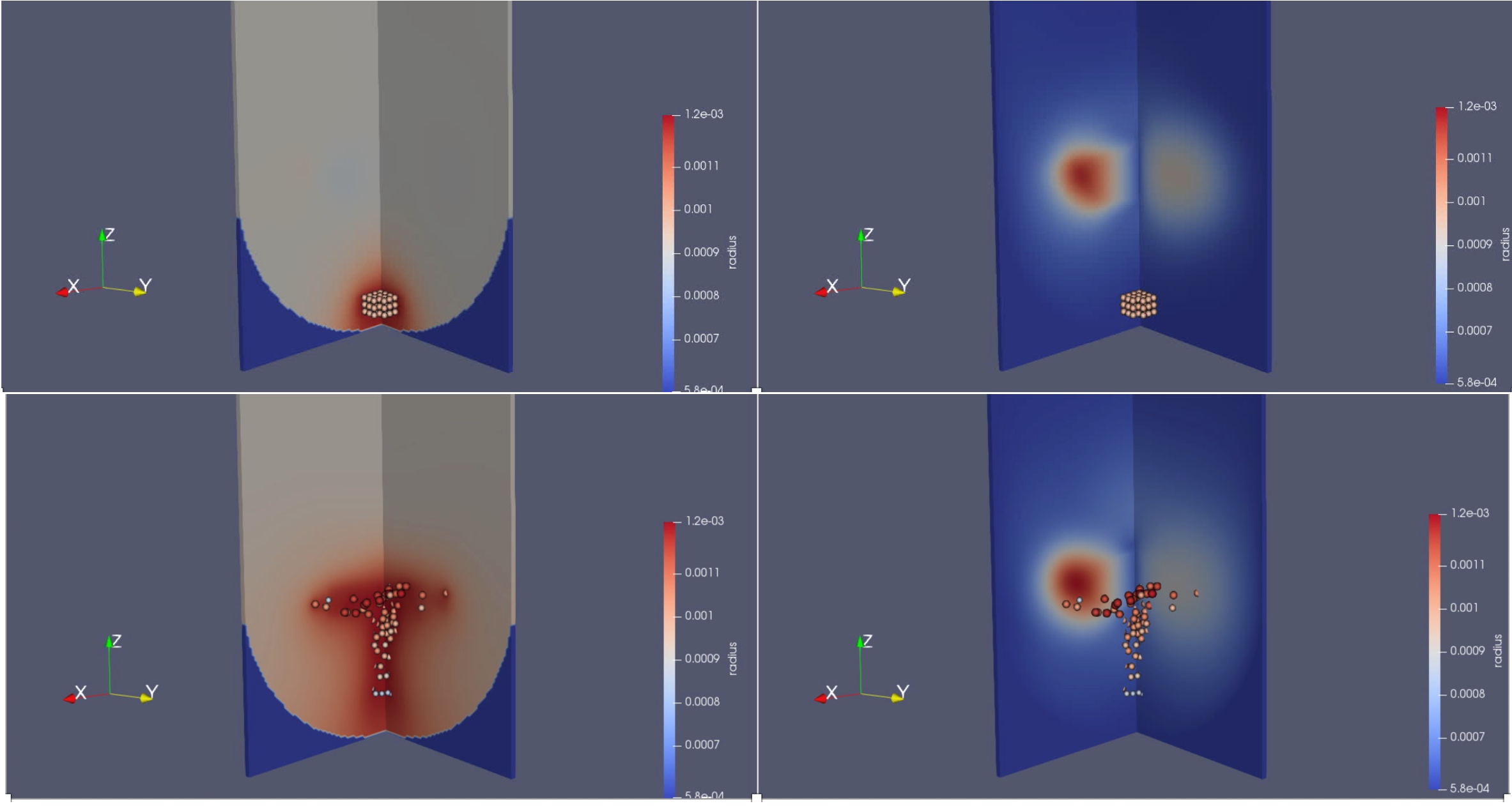