Purpose: This study aims to investigate the influence of different polymers on the physical properties of filaments for 3D printability to establish the printer's processing window.


Methods: Formulations of different polymers investigated are shown in table 1. These twelve different formulations were extruded via a Thermo Fisher Scientific 11mm twin screw co-rotating extruder. All zones were set at 150 °C, and screw speed was set at 100 rpm. The diameter of the filaments was measured by digital caliper and recorded. Differential scanning calorimetry (DSC) was used to characterize the physical state and thermal properties of the filaments. A TA-XT2i texture analyzer (Texture Technologies Corp. Hamilton, MA) was used for filaments’ characterization by a 3-point bend test (Zhang et al., 2017), stiffness test, and resistance test. The Prusa i3 mk3s 3D printer was used to print filaments into tablets. The tablets' thickness, width, hardness, and minimum printable temperature were measured and recorded.


Results: Twelve types of filaments were successfully produced by HME. The three-point bend test demonstrated HPC can enhance the elasticity of the filament but will decrease the stiffness and resistance. HPMC improved the filaments’ stiffness and resistance but reduced the elasticity in bending. HPMC - AS increased the viscosity of melted filaments so that the melted material will be easy to stick on the bed. During the 3D printing process, formulation 4 was observed to be too brittle, and it would be broken by the feeder gear. However, formulation 6 was not broken by the feeder, so the breaking distance of filaments should be greater than 6.8 mm. The surface of formulation 10 was so soft that it was broken by the feeder. Formulation 12 was shown to be too tough, suggesting the stiffness of filaments should more than 8300g. Formulation 13 did not have enough resistance so the melted material was not pushed out from the nozzle, while formulation 6 exhibited enough resistance. Thus, it was determined that the resistance of filaments should be greater than 2.0 kp. Formulation 6 conformed to the above standard but due to the viscosity of the melted filament being too low, it was not able to stick on the bed and was not able to be processed. Finally, only formulation 11 was printed successfully and met all processing standards.


Conclusion: With respect to the original Prusa i3 MK 3S 3D printer, the process window of filaments is breaking distance greater than 6.8mm, stiffness greater than 8300g and resistance greater than 2.0kp. The filaments which have enough viscosity and meet the above standards can be printed by this printer. In addition, drug and polymers/polymer blends determine filament and 3D printing success. 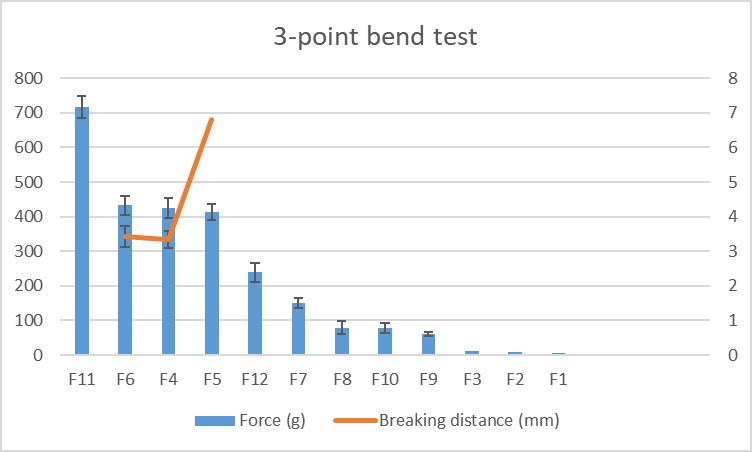