T0930-12-78 - LC-MS Method Development for Quantitation of Midazolam, Ketamine and Their Metabolites: Application to a Pharmacokinetic Study in Patients on Extracorporeal Membrane Oxygenation Therapy

Purpose: Midazolam (MDZ) is a sedative-hypnotic benzodiazepine. Ketamine (KET) is a dissociative anesthetic that provides analgesia at low doses and anesthesia at high doses. A pharmacokinetic (PK) study of MDZ and KET was conducted to map the disposition of MDZ and KET two molecules in critically ill patients on extracorporeal membrane oxygenation (ECMO) therapy. KET and MDZ are metabolized into nor-ketamine (NK), de-hydro nor-ketamine (DHNK) and 1-hydroxy midazolam (HMDZ) respectively. The present work describes a highly sensitive liquid chromatography-mass spectrometry (LC-MS) based assay for simultaneous quantitation of two drug molecules (MDZ and KET) and their respective metabolites (NK, DHNK, and HMDZ) in patient plasma samples.


Methods: Study Design - A single-center, prospective, non-interventional pharmacokinetic (PK) study was conducted in the surgical cardiovascular intensive care unit at Thomas Jefferson University Hospital. Adult patient > 18 years-old on veno-venous or veno-arterial ECMO administered either MDZ or KET as per standard of care were included in the study. Whole blood (3 -5 mL) was drawn into 7 mL tubes (BD Vacutainer) pre-coated with EDTA. Samples were immediately placed into ice following the draw and centrifuged at 3800 rpm at 4o C. Plasma was removed and stored at -80o C until analysis.

LC-MS Method - An LC-MS method was developed using Dionex Ultimate 3000 UHPLC attached with Thermo Exactive Orbitrap system. Separation of MDZ-KET was carried out on Bridge® HILIC 3.5 um, 4.6x150 mm column. An isocratic elution with mobile phase as 70:30 0.1% formic acid (FA) in water and 0.1% FA in acetonitrile (ACN). The injection volume was set to 5µL and a flow rate of 0.250 mL/min. The mass scan range of 200 to 345 m/z was used under positive ion mode.

Extraction and Linearity - Plasma samples were spiked with various concentrations of NK, DHNK, and HMDZ (10 to 2000 ng/ml). Carbamazepine (m/z=237 Da) was used as an internal standard at a concentration of 1 µg/mL in plasma. All the plasma samples with standards and test were subjected to extraction in 0.1% FA-ACN in the ratio of 1:3 (plasma: 0.1%FA-ACN). All the extracted samples were subjected to LC-MS runs as described above.


Results: KET and MDZ metabolites were detected from the spike human plasma samples using the above-mentioned LC-MS method as shown in figure 1a and b. A significant separation of MDZ-KET was observed using the current method with MDZ retention time RT=7.89 min and KET RT=7.54 min. Chromatograms for metabolites, with and without MDZ-KET mix, is shown in figure 2. Extraction protocol for MDZ-KET along with their metabolites from plasma gave optimum recovery for the metabolites along with MDZ-KET and internal standard. The regression analysis of the linearity curve of all the three metabolites (extracted from plasma) were obtained with r2=0.99. Furthermore, LOD and LOQ for all the three metabolites were found to be in nanogram levels. The pharmacokinetic study shows the time-based variation in the concentration of both drugs (MDZ-KET) and their metabolites detected in the patient samples.


Conclusion: An LC-MS method was developed for the simultaneous estimation and quantitation of MDZ, KET and their metabolites (NK, DHNK, and HMDZ) from plasma samples with parent drug and metabolites simultaneously detected in clinical samples. Application of this method will complement pharmacokinetic studies in this patient population. 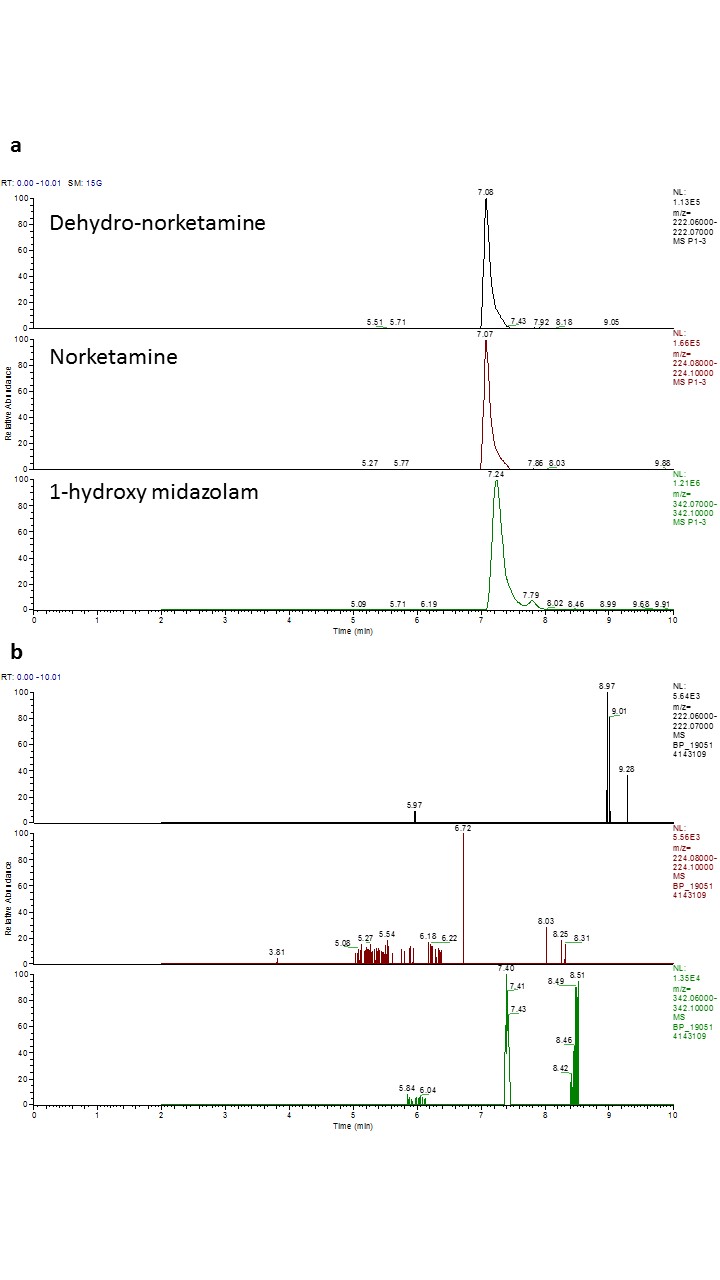 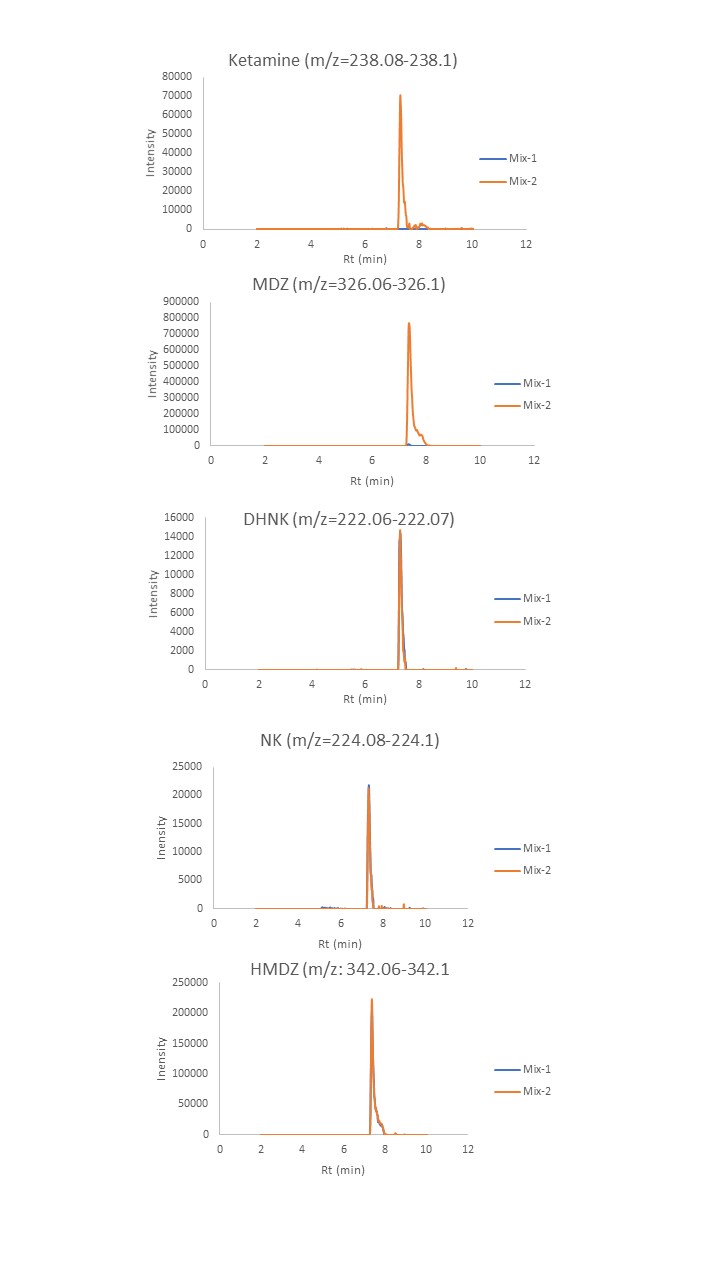