T1030-11-73 - LC-MS/MS Method for Quantification of Orexin-A in Plasma, a Biomarker for Narcolepsy

Purpose: Orexin-A, also known as hypocretin-1 is an excitatory neurotransmitter produced in the lateral and posterior hypothalamus that regulates arousal and sleep-wake cycle, and stimulate appetite. Increased levels of orexin-A increases awake time during light phase and decreases to about half of its maximum during sleep thereby regulating the diurnal sleep-wake rhythm. Deficiency of this neurotransmitter could lead to type-1 narcolepsy, a chronic prototypical neurological sleep disorder characterized by excessive daytime sleepiness (EDS), cataplexy and short latency abnormal rapid-eye-movement (REM) sleep. Orexin-A also has been implicated in the pathophysiology of depression. Histaminergic system plays a key role in regulating sleep-wake cycle and promotes arousal activity. In order to study the role of orexin-A in narcolepsy and its relationship to depression, a highly specific and selective method capable of measuring endogenous orexin-A levels and its modulation following treatment is required. The objective of the present work is to develop a highly specific and selective method for quantification of orexin-A in plasma using LC-MS/MS and study its modulation post administration of pitolisant, a histamine 3 receptor (H3R) antagonist/inverse agonist in Sprague Dawley rats.


Methods: A Nexera X2 UHPLC system (Shimadzu Corporation, Kyoto, Japan) hyphenated with a Sciex Triple QuadTM 6500+ mass spectrometer (Sciex, Singapore) was used for analysis. Chromatographic separation was achieved using an XBridge BEH300 C18 (4.6 × 100 mm, 5 μm) column. 0.1% v/v formic acid in water (A) and 0.1% v/v formic acid in acetonitrile (B) was used to elute orexin-A under gradient conditions. The mass spectrometer equipped with an IondriveTM Turbo V ionization source interface operated in positive ion selected reaction monitoring (SRM) mode was used for detection. SRM transition of m/z 713.0 → 858.4 was monitored for orexin-A. Analyst® 1.6.3 software was used for sample acquisition, data processing and quantitation. 100 µL of plasma sample was added to 10 µL of leuprolide (Internal standard) and quenched with 300 µL of acetonitrile, vortexed for 30 sec and centrifuged at 10000 rpm for about 10ºC for 10 min. The supernatant was transferred and dried under nitrogen gas at 40ºC. The dried residue was reconstituted with 100 µL of 0.2% v/v formic acid in water-acetonitrile (80:20 v/v) and injected into LC-MS/MS system. The method was applied to quantify orexin-A concentrations in plasma following administration of pitolisant (30 mg/Kg, i.p) to Sprague Dawley rats maintained at light-dark cycle.


Results: Selectivity and specificity of the method was evaluated by determining the endogenous plasma orexin-A levels. Mean recovery at three quality control levels was found to be 94%. Matrix factor as well as normalized matrix factor ranged from 0.9 – 1.1. The method was linear over the range of 1 – 100 ng/mL with correlation coefficient greater than 0.996. The stability was proved in plasma at room temperature (4 hr) and -70 °C (2 days). Processed samples were found to be stable for up to 21 hr at 5°C. In control group, orexin-A levels are 40% lower in dark phase than in the light phase. In the group treated with pitolisant before the dark phase, a minimal decrease in plasma orexin-A levels were observed compared to the predose level. Whereas, the group treated with pitolisant at the beginning of the light phase has 30% higher plasma orexin-A levels than predose.


Conclusion: The endogenous levels of orexin-A in plasma were measured at predose and post administration of pitolisant, and the effect of pitolisant on the modulation of plasma orexin-A levels was studied. In groups treated with pitolisant prior to dark phase and light phase, a significant increase in plasma orexin-A levels compared to control group was observed. The results (Graph 1) indicate that the present LC-MS/MS method is capable of detecting the plasma endogenous orexin-A levels, a biomarker for narcolepsy and study its modulation post treatment. 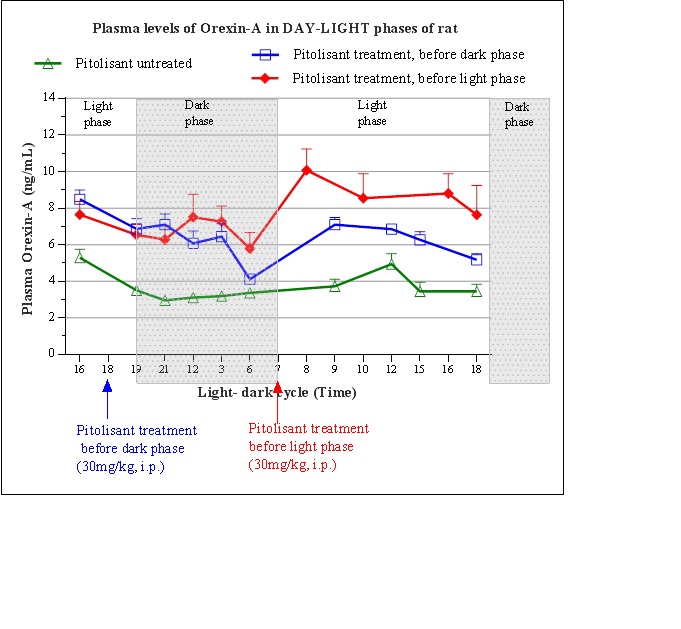