Purpose: The aim of this work was to use artificial intelligence tools in pharmaceutical manufacturing. In this work, we screened manufacturing conditions and stabilizing agents for synthetizing polymeric nanoparticles of polycaprolactone (NpPCL), a model biodegradable and biocompatible polymer by nanoprecipitation. Artificial Neural Networks were used in optimizing conditions for achieving uniform NpPCL by nanoprecipitation.

Artificial Neural Networks: Two different ANN models were built. Model 1, was prepared with all available data (e.g. using all stabilizer agents). Model 2 was focused after selecting a stabilizing agent. The inputs were defined as stabilizing agent (Stabilizer), its concentration ([Stabilizer]) and molecular weight (Stabilizer Mw), the solvent/antisolvent ratio (S/A ratio), the injection inner diameter (IID) and its impact on mixing time and linear flow rate. Moreover, the percentage of acetone, acetonitrile or methanol in the solvent phase (%solvent) was included. Finally, molecular weight and concentration of polycaprolactone (PCL Mw and [PCL] respectively) were incorporated in the model.


Results: As a first approach, similar conditions to those used in a previous study on Eudragit® RS nanoprecipitation, were used.1 The available instrumentation and conditions were not able to produce uniform nanoparticles, possibly because PCL is a neutral polymer unable to self-stabilize by charged moieties. Therefore, the development of an ANN model was conducted to find suitable stabilizing agents in PCL nanoprecipitation. Model 1 showed that the selection of a stabilizing agent is the most relevant factor in determining mean size, PDI, zeta potential and the intensities of the two first size populations in samples (Table 1). As previously described by Rouco et al.,2 the stabilizing agent with the highest %Peak 1 (intensity in a size distribution chart) using the IF-THEN rules of the Neurofuzzy logic technology was used a driving result. The stabilizing agent was selected in interaction with smaller IID values that tended to generate aggregates (for stressing the model). SDS was the only stabilizer that showed a “HIGH” %Peak 1 in IF-THEN rules when combining with a low IID (Table 2), and as such leading to uniform particle production. Model 1 was simplified to Model 2 to avoid artifacts in the network. Model 2 (Table 3) showed that this anionic detergent is relevant in determining zeta potential: an increase in SDS concentration led to an increase in zeta potential magnitude (from -50 to more than -90 mV). Model 2 indicated that the more relevant factors are those which increase polymer supersaturation (mixing time, linear flow rate, IID and solvent phase composition).


Conclusion: The used of artificial intelligence tools allowed to select the right stabilizing agent in Model 1 and achieve describing conditions for uniform NpPCL production. Then, Model 2 allowed to narrow down nanoparticle manufacture and obtain uniform nanoparticles with tunable features such as mean size (from 80 to 240 nm) and zeta potential. This shows the potential of ANN in describing and finding optimized conditions to achieve narrowly distributed NpPCL with tunable average size and could be exploited in functionalized nanoparticle production. 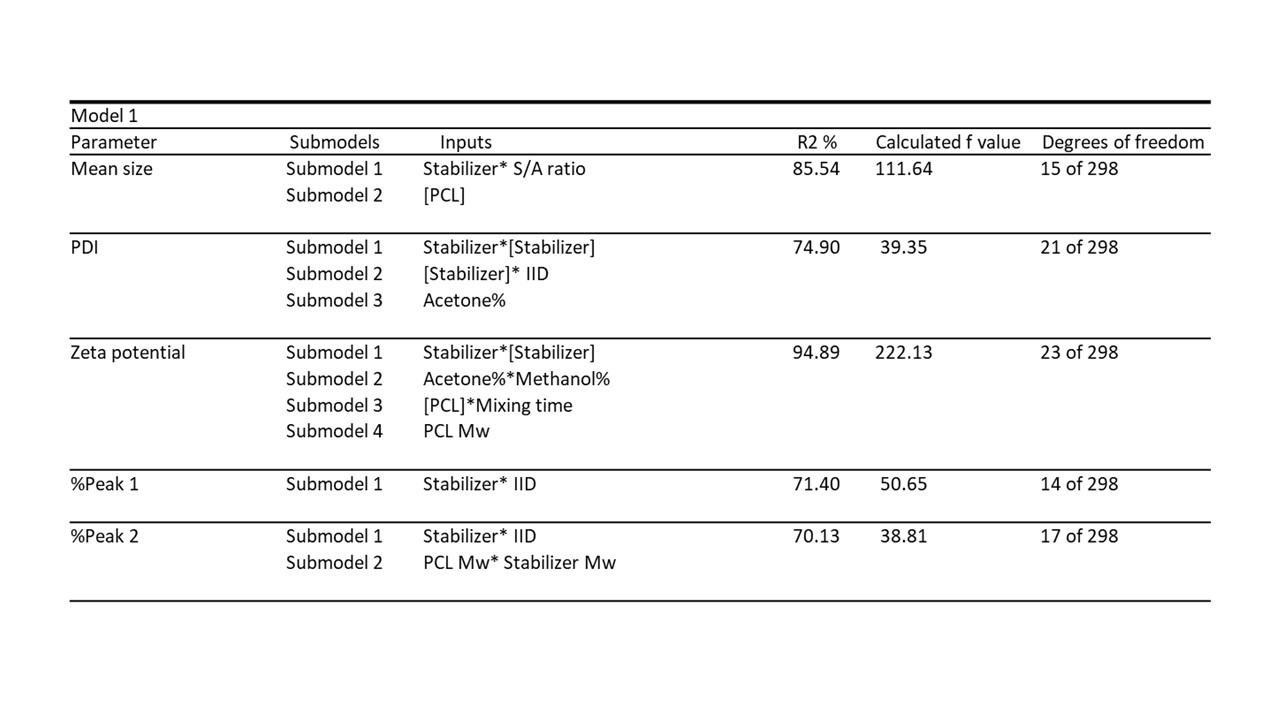 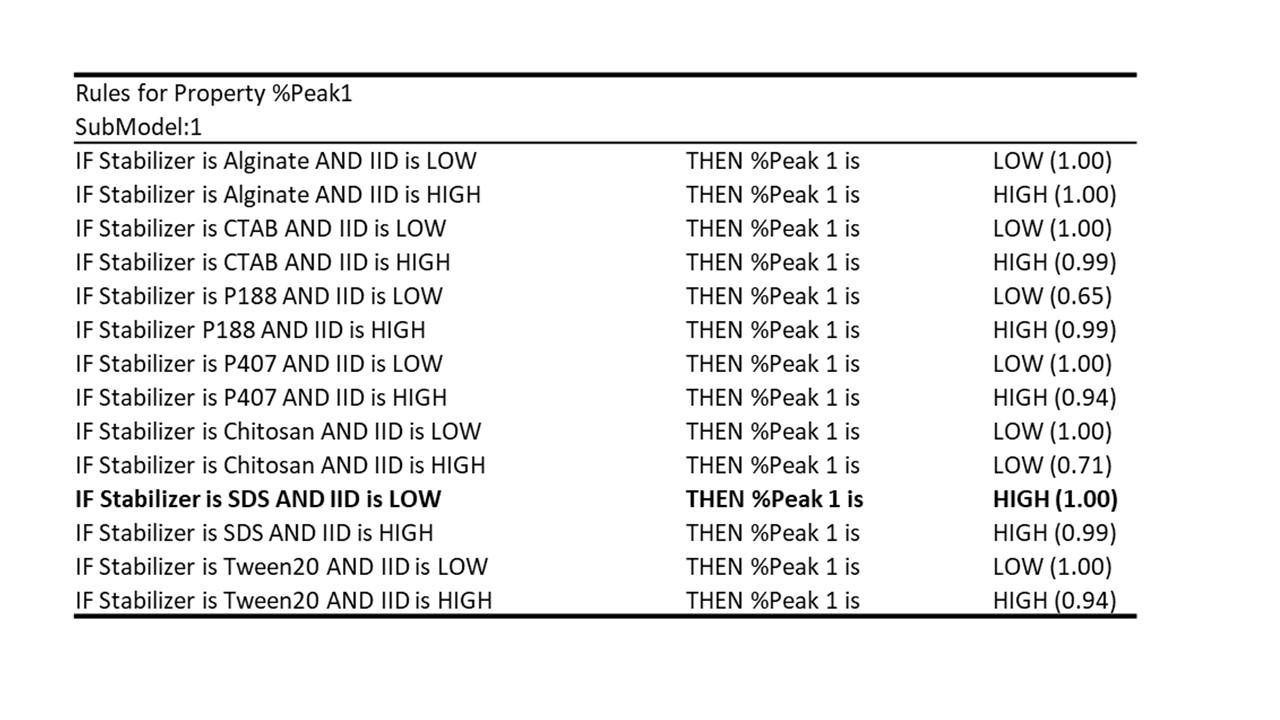 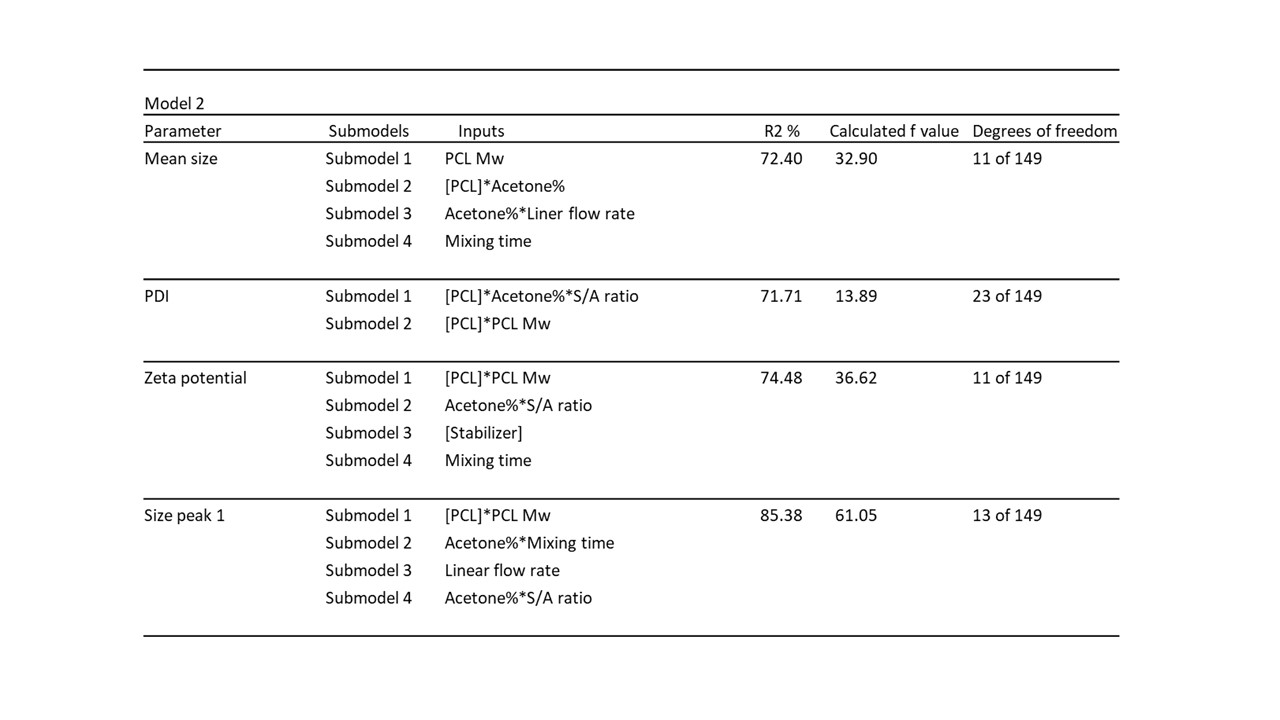