Purpose: Supersaturated lipid-based drug delivery systems (sLBDDS) have been shown to enhance oral absorption of poorly water-soluble drugs (PWSDs), such as halofantrine1, simvastatin2, and fenofibrate3. In these studies a relatively similar composition of sLBDDS was used with respect to lipid:surfactant:co-solvent ratios (e.g. 55:35:10). The aim of the present study, performed under PEARRL (Pharmaceutical Education And Research with Regulatory Links, www.pearrl.eu), was to investigate the influence of formulation composition and supersaturation degree on in vivo behavior of two PWSDs.


Methods: Four LBDDS were designed as simple mono-/di-glycerides (M) LBDDS with different fatty acid chain lengths (long chain - LCM and medium chain - MCM) and LBDDS containing a hydrophilic surfactant (S) (i.e. LCM+S, MCM+S). Equilibrium solubility of a weak acid (celecoxib) and a weak base (cinnarizine) was determined in LBDDS by the shake-flask method at 37°C and 60°C. The amount corresponding to 85% of the equilibrium solubility at 37°C and at 60°C was dissolved in drug-free LBDDS. The resulting clear LBDDS, either as 85% saturated and supersaturated relative to equilibrium solubility at 37°C were administered to male Sprague-Dawley rats by oral gavage in a pharmacokinetic study. Quantification of celecoxib and cinnarizine was determined using a reversed-phase liquid chromatography method with gradient elution. The primary pharmacokinetic parameters: area under the plasma concentration-time curve (AUC), maximum plasma concentration (Cmax) and time to reach Cmax (Tmax) were obtained by non-compartmental analysis, using the linear trapezoidal method in Microsoft Excel (Office 365) and were dose-normalized for further analysis. Plasma concentration profiles of the different 85% saturated or sLBDDS are represented in Figure 1. Multiple comparison testing was performed by ANOVA on ranks for Cmax, Tmax and AUC0–24h to compare across the different formulation compositions. A statistical p-value < 0.05 was considered significant. For statistically different values, the Tukey test was used to compare pairwise among the 85% saturated LBDDS and sLBDDS. Comparison between the systems with the two saturation degrees was evaluated using an unpaired t-test. Results are expressed as mean ± SD.


Results: In case of the weakly acidic drug celecoxib, the LCM LBDDS showed statistically significant difference for Cmax relative to MCM and MCM+S at 85% drug saturation. The highest drug exposures (AUC0-24h) were found after administration of the LCM and LCM+S systems, the latter being statistically different from the MCM LBDDS (Figure 2). When administered in a sLBDDS, the better performance of LCM LBDDS was maintained with Cmax being statistically significant different from MCM+S and AUC0-24h statistically higher than the exposure obtained by oral administration of LCM+S and MCM+S LBDDS. Administration of higher celecoxib doses using the sLBDDS resulted in an increase in exposure for three of the tested systems, namely LCM, LCM+S and MCM (Figure 2), a higher dose-normalized Cmax for LCM and MCM LBDDS and a prolongation of Tmax in comparison to 85% saturated LBDDS. For the weak base cinnarizine a better in vivo performance of LCM LBDDS was identified compared to MCM systems at 85% drug saturation, with a significantly higher exposure for LCM compared to the MCM+S system and a significantly higher Cmax of LCM+S compared to MCM LBDDS (Figure 1). Interestingly, at a supersaturation degree both LCM and MCM LBDDS performed significantly better than the LBDDS containing surfactant. For cinnarizine, all systems designed with a supersaturated drug degree performed poorly in vivo in comparison to the corresponding LBDDS designed at 85% drug saturation (Figure 2).


Conclusion: The choice of LBDDS formulation composition for two PWSDs was relevant for their in vivo performance at either 85% saturated or supersaturated drug concentration in a rat pre-clinical model. The LCM LBDDS had a positive influence on absorption of celecoxib at both saturation degrees and a significantly better pharmacokinetic profile was obtained when administered at a supersaturated degree. Similarly, for cinnarizine, better pharmacokinetic performance was obtained using long chain fatty acid formulation composition at 85% drug saturation while at a supersaturated drug degree both LCM and MCM LBDDS performed similarly between them and better than LCM+S and MCM+S, indicating that addition of a surfactant was not favorable for improved cinnarizine absorption. Comparison of 85% saturated and supersaturated LBDDS revealed the lack of benefit in increasing the cinnarizine dose by supersaturation as the absorption was considerably lower. 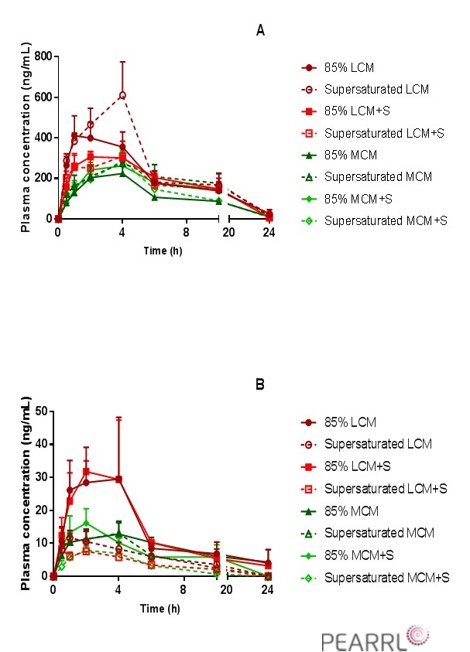 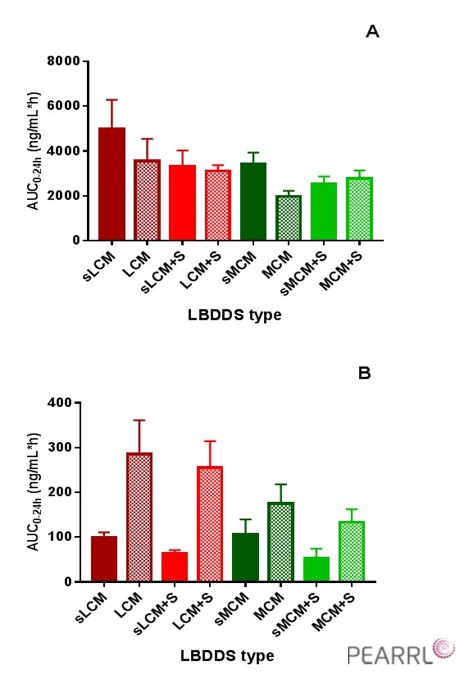