Purpose: Prescription opioids are the drugs of choice for abuse to increase the euphoric effect (e.g.,feeling intense excitement and happiness). Recently, several dosage forms are being developed meant to decrease the abuse potential of opioid medications. Abuse deterrent formulations diminish the abuse desirability of a medication by preventing physical (e.g., crushing, chewing of tablets) and chemical (e.g., drug extraction from tablets) tampering by incorporating different excipients that could provide physical and/or chemical barriers.The purpose of this study was to screen various excipients as physical and/or chemical barriers based on viscosity (ambient and heat induced), syringe-ability, tablet hardness, and drug extraction studies.


Methods:
Viscosity of 2% (w/v) polymer solutions were determined in different solvents [i.e., water, 10% ethanol, 40% ethanol, 0.1 N HCl, and 70% isopropanol (IPA)] using Brookfield Viscometer with spindle number S-03 at 1-100 rpm. Since highly viscous solutions reduce syringe-ability, drug abuse via intravenous injection could be diminished. Based on this reason, polymer solution with higher viscosity at 100 rpm was selected for heat induced viscosity and syringe-ability studies. Also, the selected polymer was further compared with polyethylene oxide (PEO 7M), since PEO 7M has been widely used for abuse-deterrent formulations. Effect of temperature on viscosity was evaluated by heat induced viscosity study based on Arrhenius equation of chemical kinetics. The study was carried out at 25, 37, 60, and 80°C at 100 rpm to determine “activation energy (Ev)”. Evis the energy required to initiate flow between polymer molecules and could be obtained from the slope by plotting natural logarithm of viscosity against reciprocal of temperature. Higher value of Ev leads to reduction in flow that might lead to reduction in syringe-ability upon heating. Syringe-ability study was evaluated using 10 mL syringe with 18 gauge needle by holding plunger to 10 mL mark and percentage volume taken in 1 minute was recorded. Based on the results of viscosity and syringe-ability of polymer solutions, tablets were prepared with selected polymers along with different microcrystalline cellulose (MCC) grades as a diluent according to the formulations shown in Table 1. Tablets were prepared by direct compression method at 2500 lbs compression pressure using Carver Press. Metformin HCl was used as an alternative opioid to prepare tablets. Tablets were evaluated for hardness and drug extraction. Hardness of tablets was determined using Pharma alliance group tablet hardness tester. Drug extraction studies were performed on intact tablet to evaluate drug extraction in water, 10% ethanol and 40% ethanol. One tablet was added to vial containing 10 mL of solvent and vortexed for 3 min and samples were withdrawn at 5 and 30 min for drug content analysis using UV spectrophotometer at 232 nm.


Results:
HPMC-K100M (hydroxypropyl methyl cellulose) solution (2% w/v) shows significantly higher viscosity at 100 rpm as compared to PEO 7M in water, 10% ethanol, 40% ethanol, 0.1N HCl, and 70% IPA. Furthermore, based on heat induced viscosity study as shown in Figure 1, Evvalues of HPMC K100 M and PEO 7M solutions were observed to be 4906 cal/mole and 1646 cal/mole at 100 rpm, respectively. This indicates that HPMC K100 M solution requires higher activation energy to initiate flow property. Also, HPMC-K100M solution was observed to be less syringe-able than PEO 7M solution. As per Table 1, tablet hardness was found to be higher in the formulations (i.e., F5, F6, F11 and F12), where MCC KG-802 and KG-1000 were used as a diluent, respectively. This might be attributed to their needle shape which leads to high compression characteristics with lower elastic recovery. In addition, as depicted in Table 2, drug extraction study was found to be lower in the formulations with higher hardness. This may be attributed to the reduction in porosity of tablets which leads to reduction in diffusion of drug and thereby reduces drug extraction.


Conclusion: In the current investigation, it was observed that HPMC-K100M has a comparable potential to PEO 7M to have abuse-deterrent characteristics. Along with this, MCC KG-802 and KG-1000 could be useful as a diluent to provide higher hardness and achieve physical and/or chemical barriers. 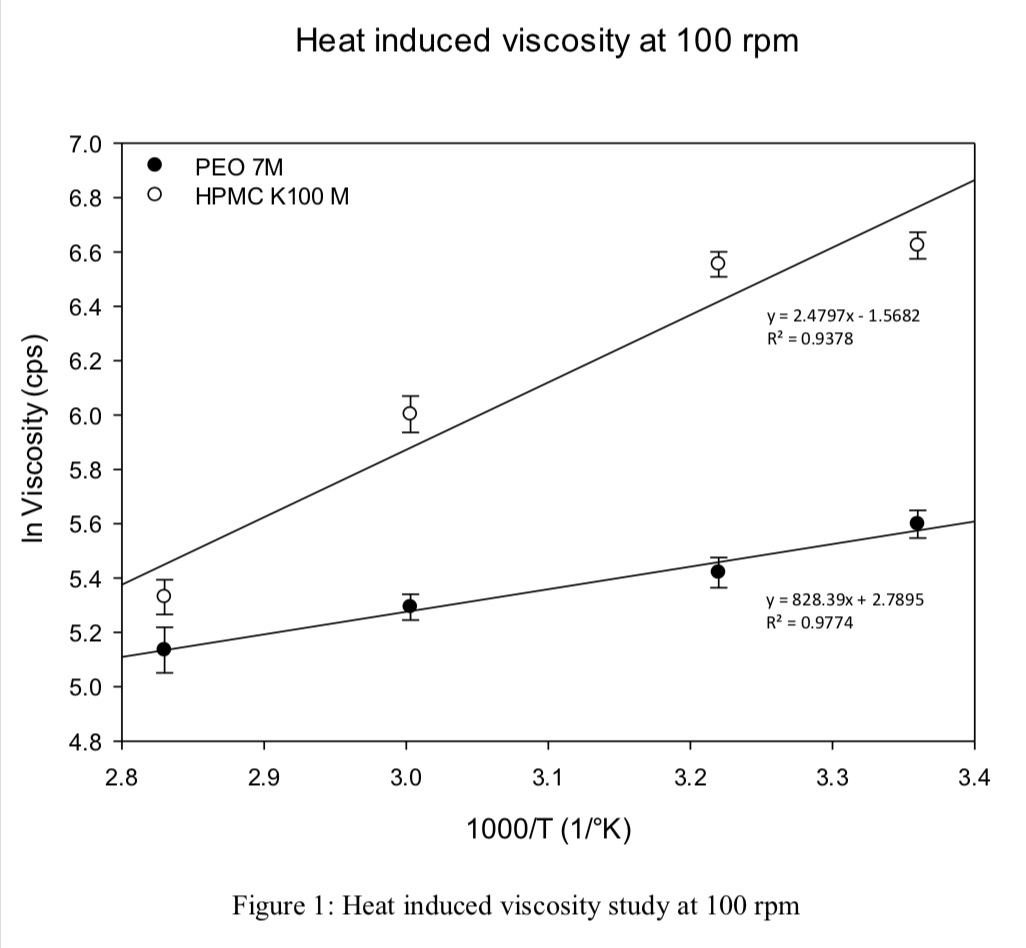 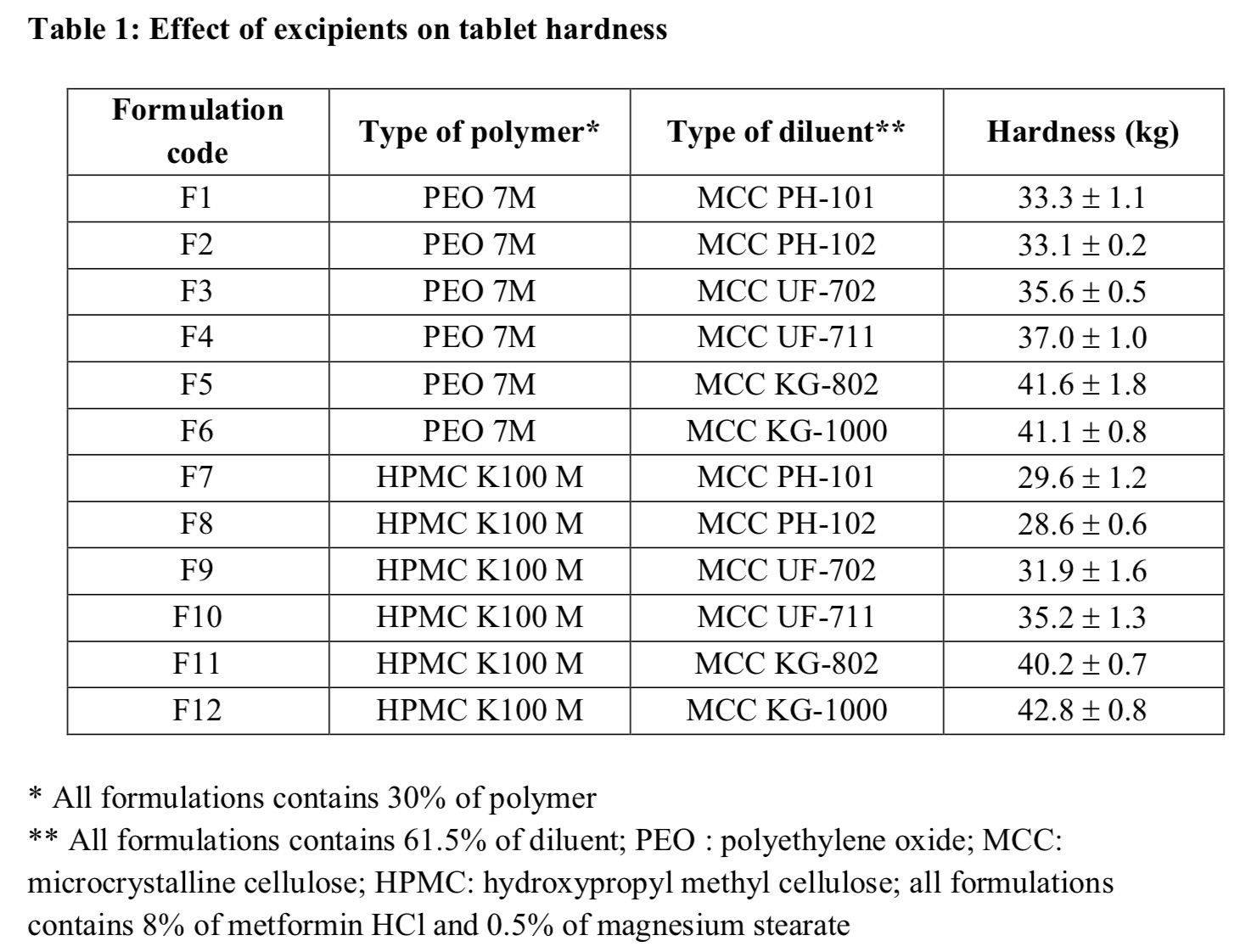 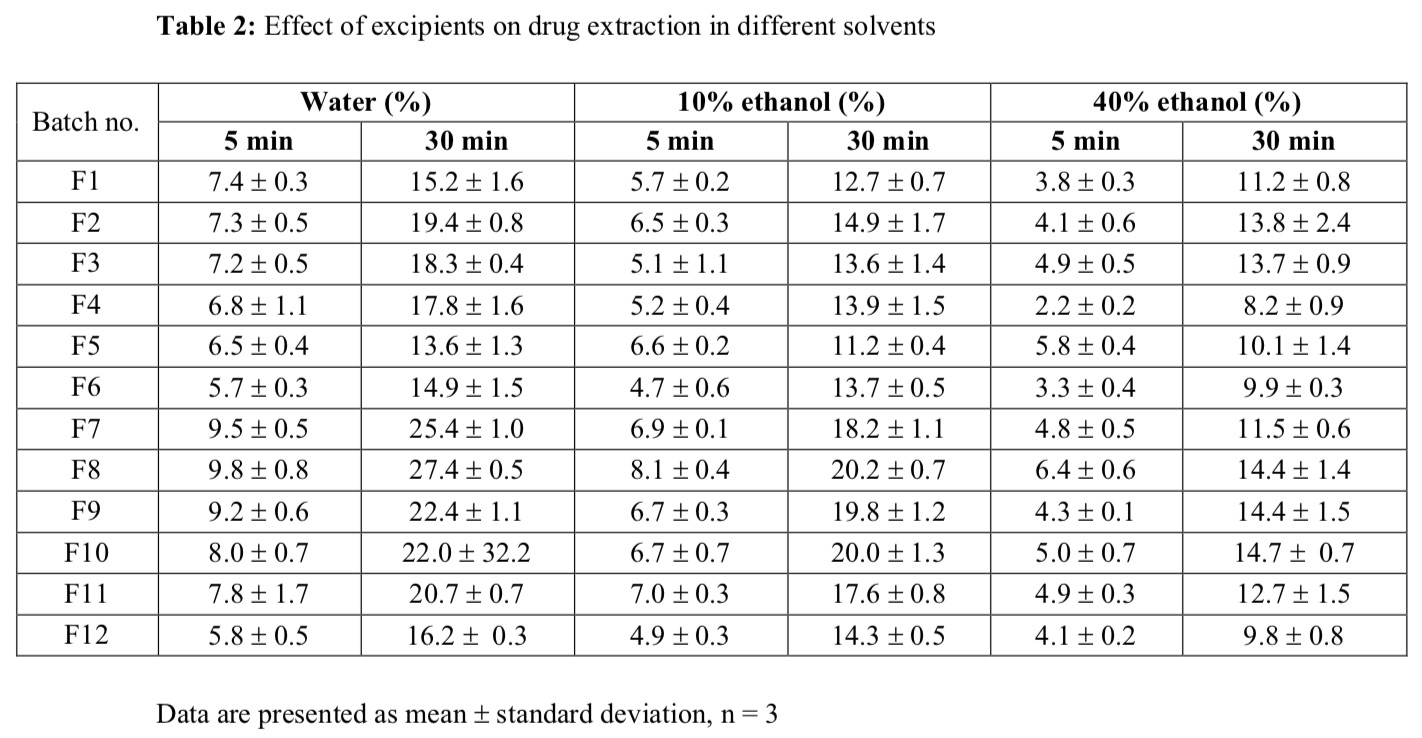