Purpose: The purpose of this work is to determine the effect of spheronization parameters such as speed and time on the Megabead size and yield mechanical characteristics.


Methods: Preparation of Megabeads. Megabeads were manufactured by mixing functional solids; Avicel pH 101 and Methocel E5 in a planetary mixer with water as a granulating vehicle. The granulating mass was processed into extrudates at 7RPM using a Multi Granulator MG55 extruder equipped with a 4mm die. The extrudates were spheronized using a benchtop Marumerizer QJ-230T spheronizer. The effect of spheronization speed (800RPM, 1000RPM, 1200RPM, and 1400RPM) and time( 2 min, 4 min, and 6 min) on the Megabeads size and yield was evaluated. Particle size analysis was performed using the Rotap Sieve Shaker, equipped with a set of sieves covering the range 1.7mm-5.6mm. The percent yield of Megabeads with a diameter of 2.8mm-5.6mm was calculated.

Results: The percent yield of beads >2.8mm, defined as Megabeads and < 2.8mm defined as fines were calculated. The increase in spheronization speed increases the percent fines by 2.5-fold. The results show that decreasing the spheronization speed from 1400 rpm to 800 rpm increases the population yield of beads (≥ 2.8 mm) from 68% to 86% and decrease the percent of fines < 2.8 mm from 33% to 13%.

On the other hand, time had direct relationship with yield. At 800RPM, 4 minutes and higher provided a significantly higher yield than 2 minutes of spheronization. At 1000RPM, there was no significant difference in the yield with time. 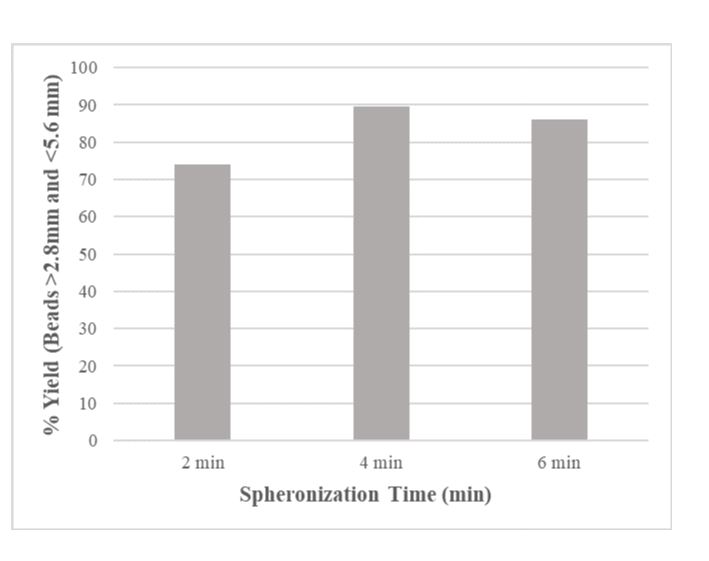 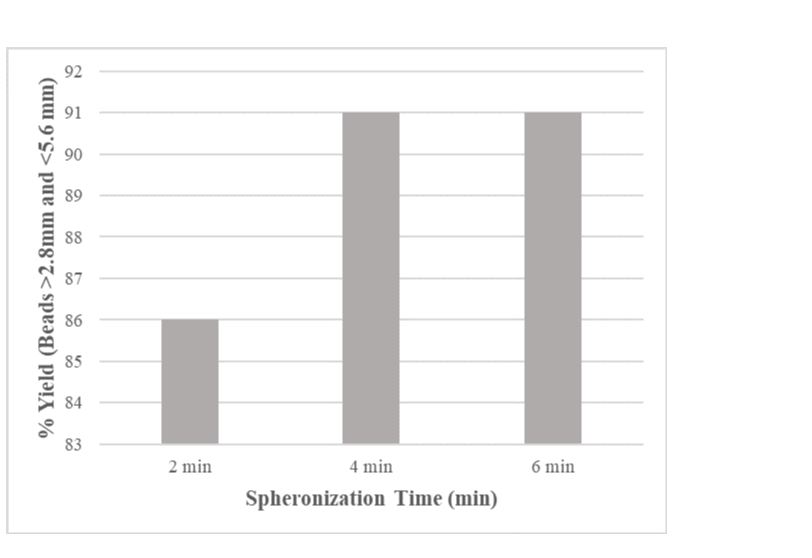