M1030-10-67 - Elucidating the Relationship between Commensal Bacteria and Cancer

Purpose: Bacteria are permanent residents of the human body and in the past years, a multitude of studies have underscored the role of the human microbiome in physiology, pathology, and pharmacology. Recent studies have unraveled the relationship between bacteria and various types of cancers. Commensal bacteria which are already present in cosmic populations inside our body have not only been found to be involved in the pathology, but also the pharmacotherapeutic aspects of several cancers. Escherichia coli Nissle 1917 (EcN) – a ubiquitous, commensal skin bacterium – possesses a unique property to target and colonize tumors. This tumor-targeting characteristic of certain bacteria has led to a rise in the interest of the scientific community to use them for cancer-related therapeutic and diagnostic purposes. Numerous clinical trials are underway to explore the potential of bacteria in revolutionizing cancer therapy[1]. Additionally, studies have also found that certain strains of commensal skin bacteria Staphylococcus epidermidis produce a potent anti-cancer compound, 6-hydroxyaminopurine (6-HAP) which has a protective effect against skin neoplasia[2].

Considering the significant relationship between human microbiome and cancer, the purpose of our study is to investigate how different commensal bacteria and their metabolites interact with different cancers both in vitro and in vivo and to identify unique bacterial compounds, pathways, and properties for potential applications in cancer chemotherapy.


Methods: First, we performed an exploratory study to investigate the movement of EcN in naïve and tumor-bearing mice. 1010 and 106 CFUs of EcN expressing luxCDABE gene were administered to Swiss Webster mice via oral and i.v. routes respectively. Bioluminescence imaging (BLI) was carried out using in vivo imaging system (IVIS) to track the movement of bacteria. Similarly, 106 CFUs of EcN-luxCDABE were administered to 4T1 tumor-bearing BALB/c mice via i.v. route. BLI was carried out at 1, 4, 24, 48, 120, and 144h. Organs of both naïve and tumor bearing mice were harvested post euthanasia[3]. The organs were digested, and PCR was performed to amplify a 100 bp region unique to the luxA gene segment. Post PCR amplification, gel electrophoresis was performed to check the presence of this segment (and consequently check the presence or absence of EcN).


Results: Our studies revealed that when administered via i.v. route in healthy mice, EcN is distributed to most organs and is eventually cleared from the body. In tumor bearing mice, EcN localizes and proliferates at the tumor site which was confirmed via BLI imaging. Bioluminescence was observed from no other region of the body other than the tumor (Fig 1). In order to further corroborate our observations, PCR to amplify a specific segment of the luxA gene (and consequently confirm the presence of our lux tagged EcN) was performed after digestion of different organs harvested from the above mice. Gel electrophoresis experiments confirmed the presence of EcN only in the tumor tissue.

Our LC/MS studies indicated the presence of 6-HAP in the supernatant obtained from S. epidermidis strain in our lab with a peak corresponding to the molecular weight of 6-HAP at 151.0494 corresponding to the molecular weight of 6-HAP (151.129 g/mol). Additional peaks were found at 152.0567, 153.0645, and 154.0723 which indicated presence of protonated forms of 6-HAP (Fig 2). Additionally, our MTT assay at 48h revealed that both S. epidermidis and EcN supernatants led to significant toxicity in RINK1 cancer cell line potentially indicating the presence of cytotoxic compounds which need to be further investigated. 1X and 2X concentrations of S. epidermidis were significantly more cytotoxic than those of EcN (Fig 3).


Conclusion: Our studies so far have confirmed the E. coli Nissle 1917, in spite of being distributed throughout the body, only proliferates in the tumor potentially due to the immunosuppressive tumor microenvironment. Our MTT assays have indicated that both S. epidermidis and EcN produce cytotoxic compounds that can significantly inhibit cancer cell growth in vitro. These studies provide interesting preliminary data which warrant further investigation into the specific mechanisms behind these results to aid the discovery of novel cancer drugs and therapies. 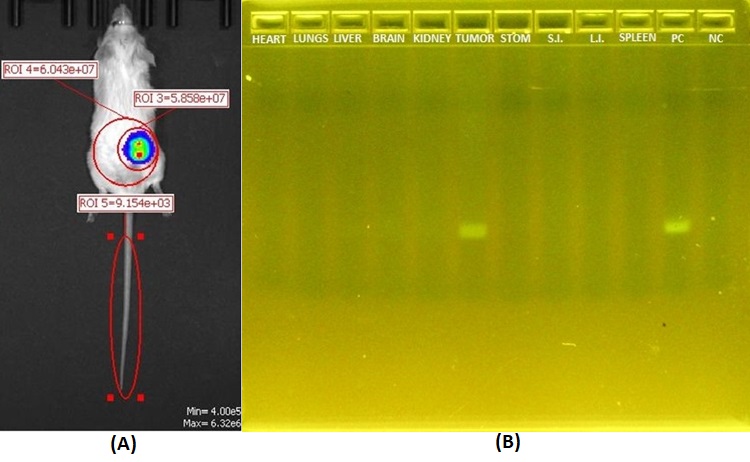 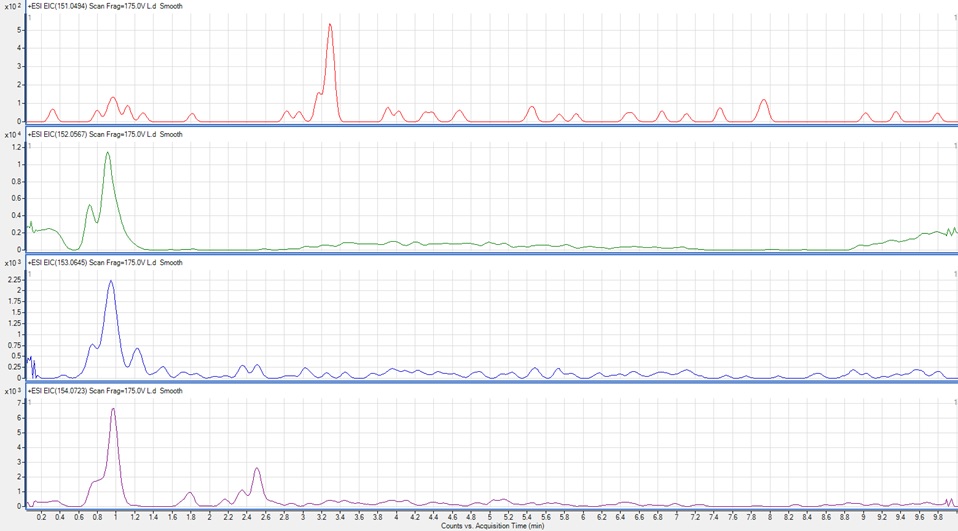 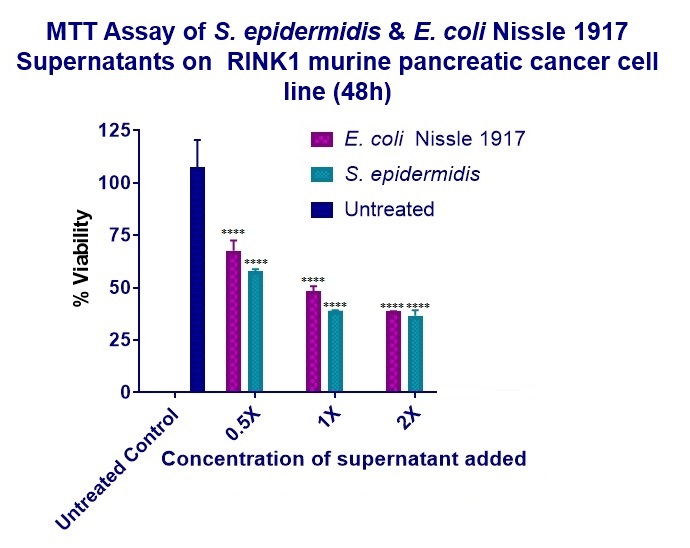